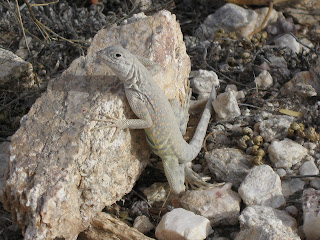 I may have been just another big tempting meal that it wished it could eat. They were out and about in pretty good numbers, along with some others, but most were not quite as cooperative as was this one in letting me get as many shots. This one was fairly brazen and stayed around while I took several shots of it with my little point and shoot Canon on full auto mode. I am 100% sure, but am still fairly certain, that this is a Greater (or was it a Lesser) Earless Lizard, and since this one looks so darned faded I would say it is the subspecies known as the Faded Earless Lizard. I got this shot on this past Saturday along the Pima Canyon Trail. 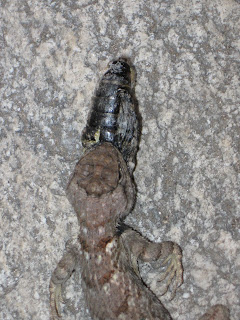 Of course I would have been too big a meal for that lizard of only about 6-7 inches or so, but lizard apparently sometimes bite off more than they can chew. Here is a pic, of what I think was a Tree Lizard (Ornate Tree Lizard) and it apparently did just that, that is bit off more than it could chew. Egads, what a way to go. Then again, probably not a bad way for a lizard to bite the big one (yes that was an intentional pun). It probably was pretty much in ecstasy thinking mmm what a scrumptious morsel, and then well...you can figure the rest. As for the bug, I suppose it too may have been thinking a nice sized meal was about to be had, heck the lizard was not all that much bigger than it. 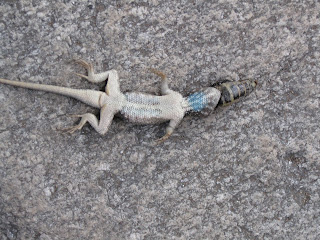 For those of you who are old enough to remember the original Addams Family on TV in the 60's - does this remind you of the Marlin with the person's lower leg and foot sticking out of its mouth. It sure struck a bell with me, a warning bell to take human bites!
All the best,
Glenn B
Posted by Glenn B at 5/04/2009 09:45:00 PM No comments: