Email Subject: "Too Much or Not Enough?"

This photo was attached to that email: 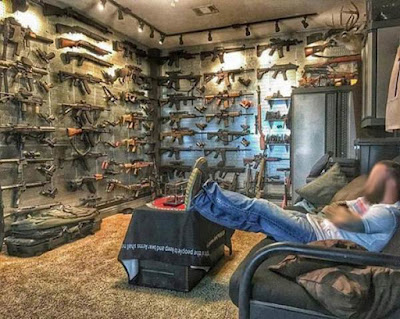 This was and remains my answer to that question:

"Too Much or Not Enough?" It is no one's business but the owner's business.
When someone owns 50 or even 100 pairs of shoes and is not a celebrity with a shoe fetish - does anyone ask? When someone owns 10 or 20 or even many more cars - does anyone ask? When you own 20, 50 or even 100 knives or more - does anyone ask unless you just threatened or killed someone with a knife? When a landlord owns 10 apartment buildings or maybe even 20 - does anyone ask? When a landowner owns 500, a thousand or even more acres of land - does anyone ask? When someone owns 500 books written by anarchists, revolutionaries, communists, criminals or even by terrorists - does anyone ask so long as there is no indication of ill intent? When you own whatever the hell it is that you legally own in great quantity - does anyone ask?
Yet - when a law abiding gun owner owns as few as three firearms and or a couple of hundred rounds of ammunition - that person is often said to have an arsenal, a weapons cache, an armory or an overabundance of firearms. The main stream media writes it up to make it appear as if there may hae been evil intent. The social justice warriors of the left immediately attack likewise. Don't think so - well, it recently happened in Houston, TX at a Hyatt Hotel. A man was detained and arrested by police after they found three guns in his room when responding to what essentially was drunk and disorderly at the hotel.
Those three guns were immediately labelled as an arsenal, a frightening find - small arsenal, cache, several guns (since when do 3 of anything amount to several), small stash, by the main stream media and many on social media. He essentially was immediately labelled, by  many in the main stream media, as a potential threat to people's lives. Many Social Justice warriors, in tweets, FB posts, and responses to articles on the subject basically labelled him as an evil doer who was caught in the nick of time! Why - all because he owned guns and brought them into his hotel room instead of leaving them in his car where he feared they might be stolen.
Despite some in the media saying there was an eerie comparison, and chilling echo, between this man and the recent Las Vegas shooter, the fact is the police stated he was not a threat with regard to him possessing those guns in his room. The police flatly stated there was no ill intent on his part. He was simply a drunk that got rowdy at his hotel and the firearms were NOT involved. Again though, I point out that the MSM and the SJWs had already done the damage by reporting fake news or at least making him out to be a seeming threat when he was not a threat at all. Here are some MSM Sources: Source 1, Source 2, Source 3, Source 4 and it went on and on. Even Fox news jumped on the bandwagon stressing that the hotel was hosting a massive New Year's Eve celebration and making it sound ominous but at least reported the police said the man did not have an arsenal (source). Yet, if you listen to the video that accompanies the article, the first two words out of the Fox News reporter's mouth are: "Frightening find" and he describes that find as "a small arsenal"!
Then there was this report, of a much more sensible nature.
The Blaze certainly seems to have set the record straight but my guess is the man's reputation already has been damaged savagely by the above linked reports. Note that The Blaze reported on one fact that every leftist media type, whose reports I read, left out of their reporting: There was an ongoing gun show just blocks away from the Hyatt Hotel that weekend! Instead of reporting the possibility he my have gotten his guns there - or that maybe he had wanted to sell them there - many of those in the MSM essentially implied how this incident very much seemed much like another Las Vegas shooting in the making!
The truth is that all manners of gun control legislation are enacted, and every type of imaginable rhetoric to label gun legal owners as threats is spewed forth, all to prevent legal gun owners from owning firearms. Yet, while the law breaker still illegally possesses them, illegally uses them and harms or kills people with them, the result is all too often that they are sentenced to what amounts to a pat on the butt. That is the insanity of the American left - a lack of almost any enthusiasm to punish those who possess, obtain, sell and or use firearms illegally and a failure to prevent evil doers from using them in the first place. Along with that sentiment by the left is another - a vehement hatred for someone who legally exercises the liberty granted to him by the right to keep and bear arms to do just that - keep and bear arms.
So yes, the only possible answer to the question is: It is no one's business but the owners business!
A hat tip to Marty W for forwarding me that email.
All the best,
Glenn B
Posted by Glenn B at 1/07/2018 12:37:00 PM 1 comment: 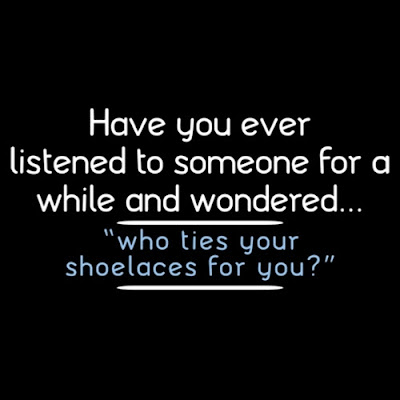 Is the climate changing - in the long run and not merely seasonally? Yes it is changing over the long term just as it has been since earth's beginnings. If you cannot grasp that fact of life - well maybe you fit the meme. Is it a manmade catastrophe - that is doubtful to the extent some are claiming by chanting their doom and gloom mantra. Yet, man (a part of the natural world) may have helped it along much the same as do the sun, trees, all other life forms on the face of the planet, the oceans & all the life forms within and so forth. Get a life and get over it, shit happens. Then learn to tie your own shoelaces.