It is so clear that it boggles the mind that our president does not get it and has to be told off time and time again by Americans who do get it. It also truly illuminates the sad state of affairs under which we now live during the current administration of a president who cares more about gay marriage, amnesty for illegal aliens, playing golf, wage equality, the minimum wage, and a lot of other things than he does about National Security and the safety of American citizens and legal resident aliens.

He has not even had the decency or shown the respect to order that flags be flown at half staff/mast in honor of the four dead marines and one dead naval officer.

I Have Got To Give BATFE Some Credit

I don't like the idea that we even have a Bureau of Alcohol, Tobacco, Firearms and Explosives within the federal government and I certainly do not like many, if not most, of their regulations relative to firearms and explosives. However, I have to give them credit when they are due credit. Years ago, I attempted to contact them by email and by telephone regarding an inquiry I had about the legality of a firearms transfer. They basically told me, via a return email, to pound sand. By phone, when I called their HQ, it was not much different. I also sent them a written letter via the post office, it got me nowhere. I called them again, dropped a dime on myself as being a federal agent, and only then did I get someone to give me some advice on my issue.

Last week, I made an inquiry of GunBroker.com an issue I was having about shipping a firearm. GunBroker got back to me the same day and they got back to me twice that day because, after their first reply, I had a follow-up question for them. I suppose that was both to my benefit and theirs; after all they are in the business of being a firearms auction house and it stands to reason they answer user inquiries quickly to keep their customer base happy and thus they keep making money.

Had I sent an email to BATFE and gotten a reply the same day, I may have fallen out of my chair on seeing it. Truth be told, I almost did fall out of my chair after contacting them. I sent them an email inquiry about the same subject on the same day I sent my inquires to GunBroker. BATFE replied to my question only two days after that and the reply I received was completely to the point and addressed my inquiry as good or better, in my opinion, than did the replies I got from GunBroker. I don't know what exactly has changed at BATFE to get them to reply to me so quickly, without any bureaucratic smoke being blown up my arse, but that change is a welcome one. Now if only they would realize the meaning of the Second Amendment.

I've Always Wanted To Hold A Pair Of 45s Like These

I imagine they must be hefty but she appears to support them well enough except for the fact that her fingers are on the triggers, well of the one set of 45s anyway. 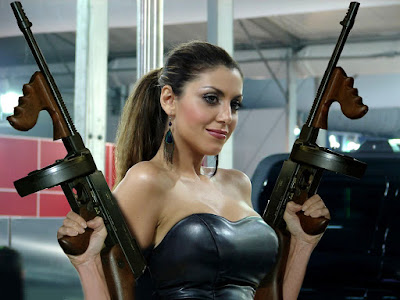 Folks, remember - barring certain exceptions - don't put your finger on the trigger unless ready to shoot. This photo posted here for firearms safety education and for that purpose alone. Why else would I post an image like this here anyway!

Improving The Public's Image Of ISIS

...has got to be kidding! The leader of ISIS reportedly has banned the showing of beheading videos because it may offend other Muslims if it scares their children. Why worry about offending other Muslims - why not just behead them and get rid of them altogether if they don't like those videos? Isn't that what ISIS has been doing to anyone who has disagreed with or is offended by them! More here.

These jerkoffs have some serious mental issues and I think the only cure might be lead to the head. If that offends anyone, especially those in ISIS, I am happy to have written it.