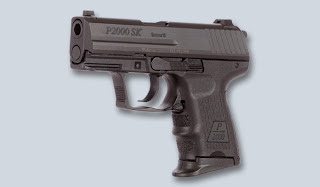 ...was made by me today. Just a day or two ago, I said I wanted one of these but just could not afford one. I gave my reasons like being low on cash, needing to find a few grand to pay to the tax man, just having paid for some expensive electrical work on the house, just having bought a bed for my son, just having put a new floor in my son's room, needing about two grand to have an oak tree cut down in my backyard. Yes the outlook for me buying the H&K p2000 SK was gloomy, and as a matter of fact it still is just as dismal. I don't think I will be getting one of them in the near future. But I did pick up a new piece of gear today despite my scant cash situation.

Last summer I fell down while on a fishing trip, and my big blubbering self landed on top of one of my fishing reels. I snapped the handle off. Since then I have tried to buy a replacement handle for it with absolutely no luck. The reel would probably last another 10 years (I have probably had it that long, maybe longer), but I just cannot find a handle for it. I was not figuring on getting a new one, but a few days ago I received a $10 coupon (good as cash) in the mail from Dick's Sporting Goods because of prior purchases I had made. I started thinking of what I could use that $10 on, anything from a brick of .22LR ammo, to a folding knife, to a box of trap/skeet shot, to a new reel. I figured I would save it until I went shopping at Dicks which I did not think would be for a month or more. Otherwise Brendan could have used it. Then yesterday I found an old Dick's gift card. I checked it and found it had a whopping $5.20 left on it, a small but nice surprise. I stuck the gift card and the coupon in my wallet.
Today I took a trip to my sister's house to visit her family and my mom who lives with them. The trip actually started out with me going to a few other places that took me somewhat east of where I live, and thereby closer to them. One thing led to another and I decided to visit them since I was getting closer and closer anyway. On my way to their place I passed a Dick's Sporting Goods and made a stop. While in there, I spied a fishing reel I liked, a spinning reel. Then I remembered the stash in my wallet. I took the reel to the counter and asked how much (in fact I took two of them, each basically the same model in different sizes). I liked the bigger one, but if it cost too much I would take the little one that was marked $24.99. When the cashier told me the bigger one was only $19.99, I took out the coupon, the gift card, and a total of $5.65 in cash and paid for it. No its not a fancy reel, not one of very high quality either, but a decent brand - Quantum (same brand as the other one that I had broken) and cost about the same as the other one did about 10 years ago. I am pretty sure it will hold up as good as the old one, and give me many seasons of good fishing (at least of good casting, I don't know if I'll catch anything). 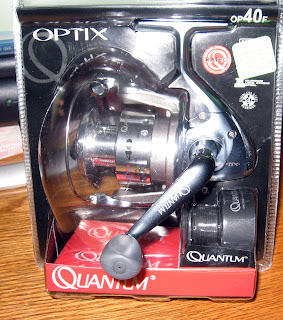 This particular reel is a Quantum OP40F. I figure it to be a medium freshwater reel. Line capacity is 230 yards of 10 pound test; and I usually use 6 or 8 pound test, so it will hold plenty more of either of them. If I decide to use 10 or 12 pound for larger fish, it will hold more than enough of each. It has 4 stainless steel ball bearings, an aluminum spool, an extra graphite spool, and a front drag. Not quite the piece of hardware I blogged about a couple of days ago, but something I will put to very good use nonetheless.
If nothing else, my having this new reel will assure two things: Spring Fever will grab hold of me harder and earlier than usual; and if I don't get to use it, well then that will be because Brendan swiped it to use for himself. So right about now, just after I finish this rant, I am going to find a nice hiding place for it; somewhere in which I'll remember where to find it, but that he will be unlikely to look. Now where around the house do I need a job to get done?
Not a bad purchase for $5.65 cash, a gift card with a small remaining balance that I found by chance in my junk pile, and a $10 coupon I got in the mail. Sought of made my day, and while I am not often easy to please, I sure was today.
All the best,
Glenn B
Posted by Glenn B at 2/23/2008 10:06:00 PM 4 comments: Links to this post