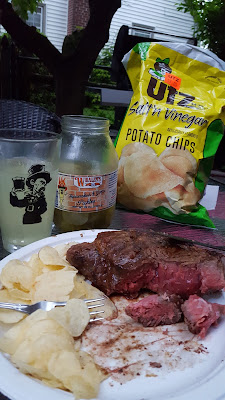 A nicely marbled and very thick NY Strip Steak that I seared perfectly with crispy fat around the edges and the inside coked perfectly to a bloody delight, a big salad of just Romaine lettuce and radishes with Ken's Italian dressing (already devoured by the time I took the photo), Utz Salt'n Vinegar Potato Chips, Whalen's Horseradish & Garlic Pickles (almost to die for, they are that delectable), some Macadamia Nuts for dessert (hidden behind the chips) and a couple of glasses of lemonade sans alcohol for a change.

Man oh man I loved it. Still have about half that steak leftover for tomorrow's breakfadt or lunch.

All the best
Glenn B 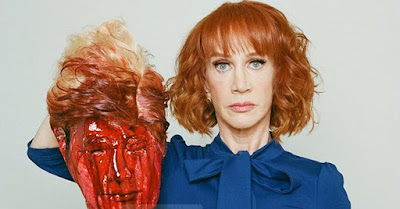 To have said that Donald Trump broke her and a bunch of old white guys are trying to silence her as an apparent way of getting people to ease up their criticisms of her for holding up a seemingly bloodied head of our president is though beyond the scope of how badly most leftists and liberals blame the other guy and shirk responsibility for their own transgressions and faults. Source.
Yet, as hard as she evidently tries to blame someone else for what she did or for being the cause of what she did - the plain and simple truth is that she did it and it was at the very least repulsive if not criminal as well. It is much the same as with Hillary Clinton outright blaming her loss in the presidential election on just about everyone imaginable, and some not imaginable. I think though that Griffin will never attain the mastery that Clinton has achieved in blaming the other guy - she, to me, is the all time master of it.
All the best,
Genn B
Posted by Glenn B at 6/05/2017 12:08:00 PM No comments: