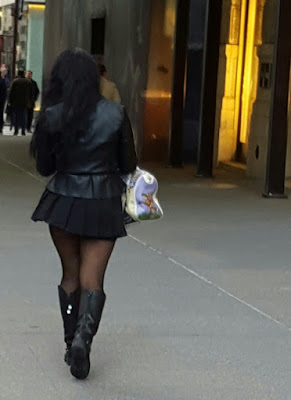 Okay, so she doesn't have a gun or blade, at least that we can see, but she is an eyeful and a sure sign of what spring will bring.

A Guy Walks Up To Me In Times Square Today,...

...maybe 45 minutes ago, as I was making my way to Penn Station. He walked up to me from behind, on my left side.  I saw him just as he approached because I scan as I walk. He looked like anyone else in the crowd but that changed as he got abreast of me and he said:

"Can I touch you with black love".

I simply replied "excuse me" as I wanted to be darned sure of what he had said before replying and wanted to throw him of a bit. I did not notice any potential accomplices and just kept moving and ready. He then repeated those exact same words.

I replied he could not touch me with anything. He kept apace of me and replied:

"I am sure I could touch you with black love".

I again gave a simple reply and said:

If you touch me with anything, I will knock you on your arse".

He got the idea but as he left he also said:

"I was going to touch you where you can't be touched, you don't have to get violent. You should ask before you get violent."

I guess he mistook plain talk for violence; the truth us violence had not come to play yet. It almost certainly would have ensued with the appropriate amount of force to make him stop had he actually laid a hand on me. I would not have asked him a thing had he touched me after saying what he had said, I would just have done what was needed.. I was more than ready, already moving in a stance prepared to defend myself had he laid hands on me. Had he remained a moment longer, I would have told him that maybe he had better choose his words better  or better yet that he just leave people alone.

One thing about this situation is that, while we were walking in such a large crowd, and yes Times Sqare is crowded during rush hours, he could have just as easily walked up behind me and shot, stabbed or struck me a blow and I would have been caught unaware.  I scan around me as I walk but do not have eyes in the back of my head and tend to watch where I am walking even though I am alert and scan. Once I was aware of him though, I was immediaely on high alert and ready to do whatever in self defense.