You may remember my son turned 18 at the end of last year. With that came his liberty to buy and possess firearms - yes even here in anti-gun, tyrannical, ultra-liberal New York. He was surprised to learn that now he could indeed go out and make a purchase of his own firearms without me in tow. Somehow though, I thought he may have lost interest in getting himself his first self purchased gun, I guess simply because he has not said much about it in several months.
Tonight though he surprised me. he told me he had been in a gun shop just a few blocks from our house (small store, but exceedingly high prices on some things I have seen there) and that he had checked on the availability of SAIGA rifles. They have a SAIGA in .223 for the price of $350. I guess not too bad considering I can buy one online for $329 plus shipping, plus an FFL fee (probably at least $50 around here,but likely to be more). He did not ask the gun shop clerk, but my guess is it comes with one magazine (10 shot for .223 I think). The one online comes with 4 10 shot magazines. Still though $350 is not all that high from what I can gather. He was also told by the store clerk that they would be getting them in 7.62x39 soon. I told Brendan that he should consider getting one in .308, a much better round than either of the others. He is going to go back to the store to inquire if they can get one in that caliber.

The rifles are not bad at all from what I can gather. They are sturdy work horses, based on the AK design, and are fairly accurate out to 200 to 300 yards. They are available with a 16.3" or 21.8 inch barrel, and come with either wood or synthetic stocks. They are manufactured or imported by Russian American Armory, see this link for more info:
http://www.raacfirearms.com/Saiga_308.htm
I should point out, I also told Brendan that if he really wants one he should save up his money for one of these rifles. Then Brendan told me that he has been saving all of his change toward just that end. That was a pleasant surprise for me. I don't know how much he has saved, but my guess is he could save $400 or so in change, enough for the rifle plus tax and maybe an extra mag and some ammo, in about a year or less. We will see how this works out, and I'll keep you advised of any real progress toward this goal. If I am lucky he will save enough for two of them and buy one for me too.
It seems I have planted the seed of an American Rifleman within the soul of my son. That my friends is a good thing indeed.
All the best,
Glenn B
Posted by Glenn B at 7/23/2008 10:09:00 PM 2 comments:

How Could I Resist - It Was A Package Deal

Yes I am short on funds, yes I am trying to save up for a new gun, yes I have been hit with a lot of unexpected bills lately, yes my son's college tuition is due by July 31st (ouch - man have state university tuition costs skyrocketed); but how could I resist a deal like this. I mean even if the scope is a piece of trash, and I am not saying it is but just that it could be at this price, so long as the scope mount/receiver cover is of decent quality this is a good deal. Supposedly the cover/mount is all steel. 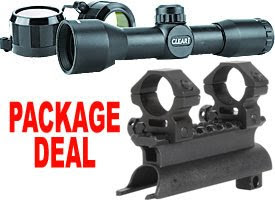 What exactly is it? Well, it's a scope mount and rifle scope for a Yugo SKS that is being offered by Centerfire Systems at: http://www.centerfiresystems.com/pkg106.aspx. I never heard of this outfit before, but I found them while searching for info on a SAIGA in .308. Once I saw this ad on their home page, I was hooked. Of course, I realize that any scope mounted as far back on an SKS as this will be will probably want to scoop my right eye right out of its socket with each shot fired, but I have other plans for the mount than using the scope that comes with it. My hope is to mount a 1" tube red dot sight in the mount. That will not protrude anywhere nearly as far back as would even the so called "mini compact scope" that comes with the package. Of course, since the scope comes with the deal, I'll have to mount it before buying a red dot scope, just to see how it works albeit facing the risk to my becoming a cyclops. Who knows - it may be just the thing for an SKS. For the price of $34.98 I cannot go far wrong, that is of course barring losing an eye to this set-up. Sure the ad says $24.99, but I am adding $9.99 they charge for shipping accessories.

I have already ordered it, and once I have received it, I suppose I'll have to make a trip to the range with Brendan and a couple of good pairs of shooting glasses to check it out. Once I do, I'll let you know what I think of it.

I didn't know I could do that!

That is drag a page element to appear just above my rants. That is great, this way I can have a topic right at the top of my blog for as long as I want. Good place to put the Soldiers' Care Package donation request while it is still ongoing.

By the way, so far, I have only received one donation. I have to ask - what is up with that? Is it that people are broke, or that they don't think it a good cause, or that they do not trust me, or what? Those are not rhetorical questions either, I would appreciate some answers, thoughts, opinions, as to why only one person has made a donation to such a worthy cause. Last time around there were quite a number of donations; so I just don't get why there is only one so far this time around. So please leave me your thoughts on it, you can leave them anonymously if you want.

Off To Visit My Mom today...

...in the hospital. She took a fall a few days back, and has been in the hospital since then. I had best get my butt out her way for a visit, and to give my sister a break. My sister has been attending to her for the 2 days she has been in the hospital already. So not much time to blog today, and probably not tonight either. By the time I get home, I'll probably be ready for an icy cold beverage, and then to hit the hay. Not looking forward to the 1 1/2 hour drive. Maybe more depending on traffic, and thank goodness this is not a Friday because traffic to eastern Long Island can be really bad on Friday in the beach season. Oh well, I gotta grab a cup of Joe and hit the road.

Edited to add: Now an hour later and I still have not left home. Delays, delays, delays, but I'll be leaving soon - just waiting for my phone to charge up a bit - no car charger.