I Was Awakened By An Explosion...

...this morning, at around 0755. I was getting some decent sleep for a change and if not for the big bang I would have slept another hour or so. Oh well, at least I did not awaken from uneasy dreams and think I was a multi-legged vermin.

So, this bang wakes me up and as soon as I was up I was pretty certain it had been an explosion and not a gun shot but who can tell for sure when a noise wakes them. I checked my son's house for smoke - none. I went out on his deck and checked the breaker box - almost touched it but kept a good 1/4" away to see if it was hot, it was not. I also checked his HVAC unit and it too seemed okay. Looked around the whole house & garage, saw nothing that went bang. There were no dead bodies as if maybe one of the dogs somehow shot an intruder (or one shot himself). I checked my carry pistol, it was fully loaded so I had not grabbed it in my sleep and shot one off. Then I went to the back yard and took a look at the two transformers up on the electric poles - no smoke, they seemed fine. Went out front and saw neighbors across the street and the house to right of my son's house had power. Went back inside and texted my son asking him to send me phone number for the electric company.

A little while later I decided to go outside and look around the base of the electric poles to see if there were any transformer parts on the ground. Looked up again and this time, since I was much closer with an open view of the transformer, I saw this: 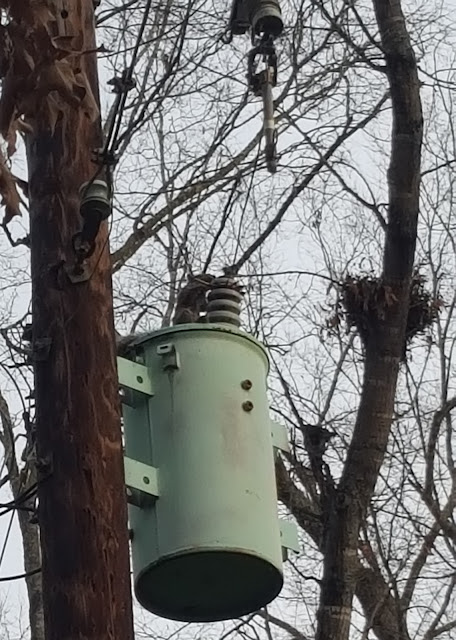 Yes, that is, or was, a gray squirrel sitting atop the transformer. The metal thing hanging down to the viewers upper right was a breaker. Apparently the little bugger kissed a hot spot and pop went the weasel, so to speak. I found it odd that it made such a loud bang yet did not knock the bushy tailed rat off the transformer. I headed back to the house and met Brendan's next door neighbor who was also outside to check on what had made the noise and shut his power off as well (he was in house to the left of my son's). Told him about the squirrel, he took a look, had a chuckle and confirmed my eyes had not deceived me.

About an hour and a half or so later, a guy from the electric company showed up with a telescoping pole with a kind of hook at the top end of it. He extended the pole and knocked the crispy critter off of the transformer. It went thump into the leaf litter and was undoubtedly dead. 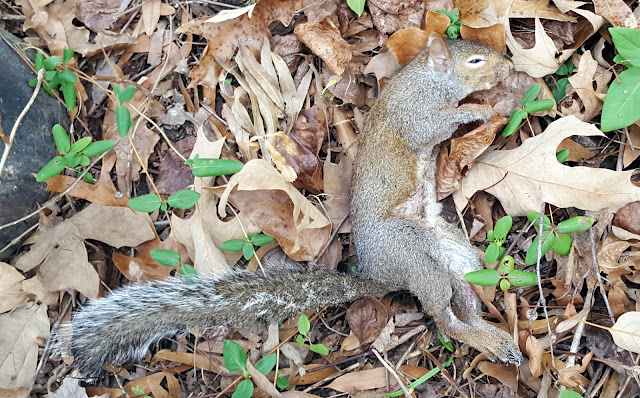 Then the electric company guy used the hook at the end of the pole to grab the breaker, took it down, changed a fuse in it, then set it in its proper place and snapped it in with that telescoping pole. The power was back on just like that. He mentioned the explosive noise was the breaker which is essentially a metal tube and acts like a gun barrel when it is tripped shooting out whatever it shot out as its parts separated. Sounded much more like an explosion that a gunshot though.

As for the dead vermin, I retrieved the squirrel because it has fallen on Brendan's side of the fence and saw this: 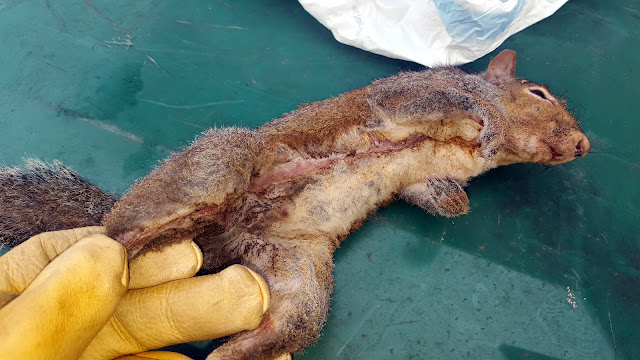 The zap line ran from its neck all the way to it's right rear foot. Ouch, that looks like it must have hurt, that is if the squirrel lived long enough to feel it.

Funny thing was after the guy knocked the squirrel off of the transformer, I mentioned to him it looked like there were twigs sticking out of it. He said that those were the squirrel guard, little metal spike-like wires to prevent squirrels from doing exactly what this one had done. It had fried itself extra crispy by giving the transformer the kiss of death - only it resulted in the kisser's death as as well as that of the kissed.

I am pretty sure Brendan was quite relieved that was the cause of the power outage as opposed to something wrong with the electrical stuff in the house. Electricians and electrical repairs ain't cheap. As for the squirrel, Brendan sent me a text saying: "poor guy"! At least it was quick or so I guess. I am also guessing it was the shock of that little gray bushy tailed high-wire acrobat's life!