There Are Monsters Among Us...

...and some of them pretend to be our loving parent or in this case step-mother. Sara Packer, the mother of 14 year old Grace Packer, and Jacob Sullivan, the mother's boyfriend,  have been charged with the truly horrendous crime in which they allegedly murdered the girl. Her death did not come swiftly or painlessly and not before the girl was allegedly: beaten, raped (while the mother watched), left in a hot attic to die while bound and gagged and thrown into a cedar closet, and then was essentially strangled - all over an 18 hour period. Apparently they had planned the "rape-murder fantasy" for almost a year. It is also reported that the pair tried to commit suicide on this past  December 30th by drug overdose and that while in the hospital being treated for that, the man reportedly told hospital employees that he and the Grace's mom were responsible for the teen's murder. More here and here.

If they are indeed guilty, and the linked article says the man has confessed, then I cannot even begin to detail what I would like to do to this pair for fear of the mind police coming to lock me up in the Bizarro World in which we live today! I will tell you this much: I would gladly mete out vengeance for the child and would not go easy on her killers were it legal for me to do so. I would choose to go slowly, very slowly, possibly with some bit of accomplishment in my heart (knowing that true justice was being done), while bringing them to an excruciatingly painful demise.

I pray there truly is a Heaven and that Grace is their now surrounded by love and tranquility.

There Are Just So many Things Wrong...


...with this as to make me cringe at the thought of me being at the range next to someone like that or with those other morons there at the same time as me. I can maybe understand a guy shooting like that the first time, without proper coaching, but what I cannot understand is why the one guy is forward of the firing line and then stays there when the shooter starts blasting like an arsehat. As for the guy who grabs the gun, if he was a range officer (and note I said if) then shame on him for not watching the arsehat from the get go. If he was just another shooter, then good for him for doing what he did.

Despite saying all that, I give the shooter an A+++ for enthusiasm.

Idiots To The Left Of Me, Idiots to The Right... 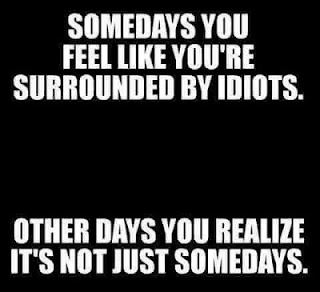 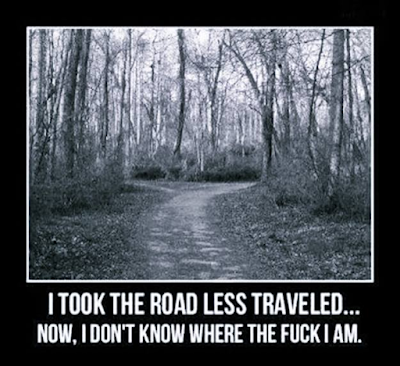 Yep, that's me.
All the best,
Glenn B

Sanctuary Counties - I Love Them

No, I don't mean sanctuary counties that protect wetbacks and allow them to illegally remain within our borders. I am talking about certain counties within NY State that have defied Governor Andrew Cuomo (FUAC) and have refused to enforce at least certain parts of the very anti-RKBA New York S.A.F.E. Act. The sheriff's office in Saratoga County, NY has given notification that it does not intend to enforce a provision of the NY SAFE act that recently went into effect requiring pistol license owners to renew their permits every five years. More here.

In effect it has given sanctuary to those who will not comply with that patently unconstitutional infringement of the RKBA. Three cheers for the SCSO!

It snowed, last night, almost as much as the top number they predicted - which was 8 inches. All told we got a total of 7.25"; I measured this morning in a few places and it was virtually exactly the same at each spot.

Last night, I went out around 8PM to shovel again and I estimate that another 4" had fallen by then, since I had first shoveled earlier in the day. I did the side patio so the Chihuahuas could get out to answer nature's call and the walk along the garage. When I got to the walkway to our front door, it had already been done, obviously by a snow-blower. Once at the sidewalk, I could see it was my next door neighbor who had done it as the cleared trail led back to his place. A nice man is he! Earlier in the evening, my daughter (who is staying with us for a few days with our grandson) went over to his place to ask if she could put her car in his driveway as we already had three cars stacked in there like cord wood. As usual, he said okay. She gave him a bottle of wine as a return courtesy (really, it was not in hopes that he would then clear our sidewalk). I hope he did not feel obligated to clear our sidewalk and walkway. Anyway, there was still enough left for me to shovel to keep me busy for awhile. I widened the single lane he had made and cleared the whole sidewalk and walkway as well as the front steps. When I went out this morning, there was only about 1/4" of additional snow on the ground and it cleaned up quickly. I also cleaned off the three cars in our driveway.

It looks nice out there now - everything covered with the clean whiteness of freshly fallen snow. Too bad it never lasts long here in this way too urban area but at least for now it looks like a winter wonderland. I imagine if birds could think like us though, they would not see it quite that way, probably makes it harder for them to forage. With that in mind, I think I need to get outside again and fill the lone bird feeder I have in the backyard.