I Had Peered Into Hell

"It's hard to imagine um, for a a normal human mind uh, I had peered into hell and that's (sobbing a couple or few seconds) it's not, ah, something you quickly forget and it's a little hard for me to describe."

Night Will Fall, along with the imbedded German Concentrations Camps documentary, illustrates the ghastly things that men can do unto other men. Regardless of the horror, or more precisely exactly because of it, it is a film that should be watched by every living soul in the hopes we never repeat the mass executions of 13 million fellow human beings. There are scenes in it that will shock you and that you are unlikely to forget. One for me was seeing the bodies at Belsen-Bergen Camp, I could only think that sights like that were in some way used as models for zombies in todays horror movies. Another and possibly one of the most shocking scenes for me showed only buildings. It was an aerial film of Auschwitz Concentration Camp - it was the largest of the concentration camps and seeing its size in this film was chilling considering what took place therein. I won't go on more about it except to strongly suggest that you watch it. It is an eye opener. It is currently showing on HBO.

My hope is that I will one day be able to see German Concentration Camps in its entirety. Despite being shelved right after the war, it was resurrected by a British museum that completed it the way they believe it was meant to be done.

During his speech at the recent national prayer breakfast, the Barack Hussein Obama  the NIC (nincompoop in charge) had this to say about the crusades:

"Unless we get on our high horse and think this is unique to some other place, remember that during the Crusades and the Inquisition, people committed terrible deeds in the name of Christ."

The goal of the Crusades was to end such persecution and to restore Christian access to Christian holy places in and near Jerusalem - access that had been denied to Christians (and access denied to Jews to Jewish holy places) by Muslims after Muslims conquered those lands in the name of Islam hundreds of years before the first Crusade. Here, Mr. President, is a little time line to help you and your leftist cronies figure it out: 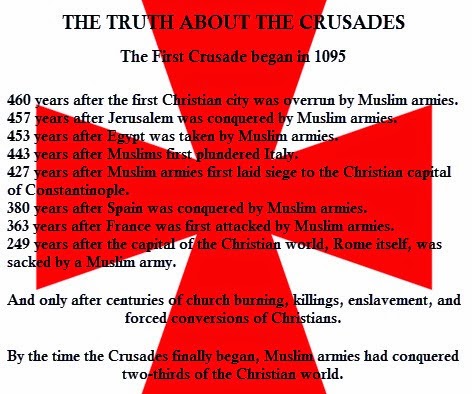 More information about the Crusades can be found here: http://www.crisismagazine.com/2012/crash-course-on-the-crusades.

It sickens me at just how easy it is for an apologist and tyrant like Barack Hussein Obama to overlook history in an attack he makes on religion while at the National Prayer Breakfast. It also angers me how much he seems to be in sympathy with recent acts of barbarism carried out by Islamic Terrorists!

A hat tip to my friend Kevin B for the Crusades chart above. 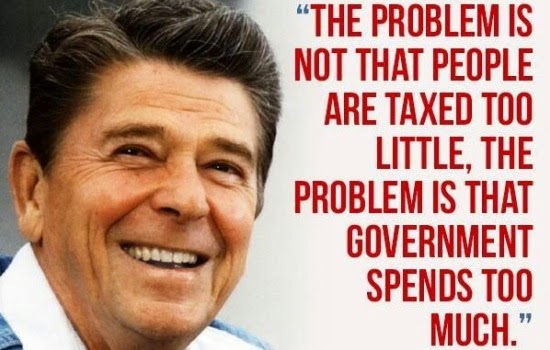 One would think that the government agency tasked with collecting and protecting the tax revenues of the United States of America would strive to hire individuals who are trustworthy, who have an excellent history of a good work ethic and who are on the record as always paying their taxes promptly and in full. One would be wrong though in the case of the Internal Revenue Service.

It has been reported here, that between January 2010 and September 2013 the IRS rehired 7,000 (that number is actually rounded off to the nearest thousand, it was 7,123 in that time frame - source) former IRS employees and of that number 824 of them had "a checkered work history". According to the report, that number includes people who were fired, or otherwise let go, by the IRS for such things as: not paying their taxes, fraud, unauthorized accessing of taxpayer information, falsifying documents,  disrupting the work place, being away without official leave (one person supposedly disappeared from the job for 8 weeks), threats, sexual harassment, unprofessional conduct, off-duty misconduct, and criminal misconduct. Of those people, 141 of them had "problems" paying their taxes!

So what has the IRS said about all of these problematic rehires. They in sum and substance say it is not a problem! According to a report by the Treasury Inspector General (IG) For Tax Administration, "the IRS stated that, during the process of evaluating qualifications of applicants, prior IRS conduct and performance issues do not play a significant role in deciding the candidates who are best qualified for hiring.  In addition, IRS officials stated that prior performance issues should be considered during the eligibility phase, while conduct issues should be considered during the suitability phase." The same report went on to say that: "We are concerned that the IRS may not be adequately considering prior performance issues when selecting former employees for hire." and  I say DAH! I also say - who wouldn't be concerned except for the IRS under the administration of Barack Hussein Obama. It is truly as if we are living in Bizarro World under this clown commander in chief.

I strongly recommend reading the IG's report, it is an eye opener and is relatively brief at 20 pages (a good amount of which are references and footnotes). You can make a lot more sense of the numbers in the news article by reading the whole report. It also gives additional information to some of the "problems" that led to the employees either being fired, voluntarily leaving the IRS after discovery of their wrongdoings or otherwise being out of a job with said agency. For instance, of the 141 who had problems paying their taxes, five of those employees were found by the IRS management "...to have willfully not filed their tax returns."! Yet these tax cheats were rehired by the agency responsible for taking our money out of our pockets to pay the salaries for what is seemingly, at least to me, the most corrupt collection of cronies to have ever run our government. So much so that the IRS stated that not rehiring these people after consideration of their former transgressions could be against government regulations! If that doesn't beat all, as one of the worst excuses ever for inept bumbling fools rehiring people that should never should have been rehired, then nothing does.

One other thing you will get out of reading the whole report is the bottom line as to what the IRS plans to do to change its hiring procedures. In essence it was that the IRS determined that they would in sum and substance do nothing as far as I could make of it and that they consider the matter closed.

If you are even considering a vote for a democrat or a RINO in 2016, either for the presidency or for Congress, you are out of your mind or a leftist lunatic or both. Folks, the only way you can run a government the way it is being done now is to run it into the ground and the current administration is doing just that at full speed ahead.