Some Old Pics Of Gals With Guns...

...sorry men, no boob shots or short-shorts but I think you might enjoy taking a look at these shootist women from a bygone era. 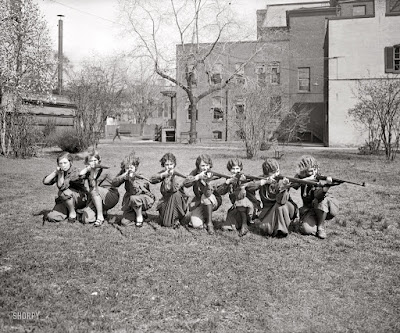 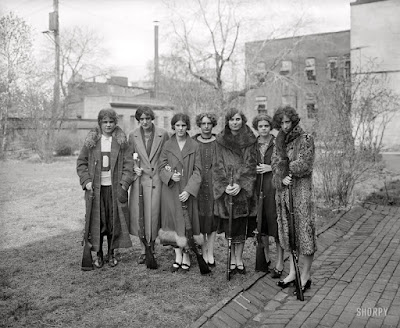 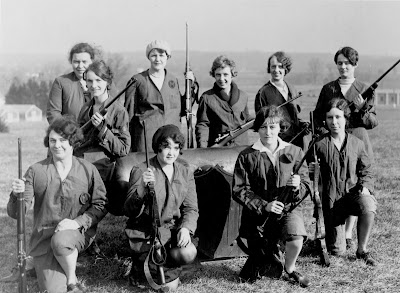 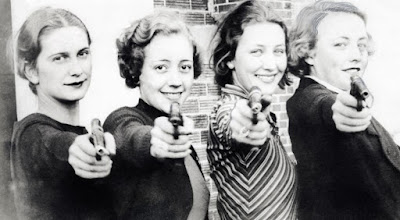 As I noted in a recent post, I finally fired my Polish WZ-48 trainer in 22LR a couple of nights ago. It was about time after owning it for more than 4 years and 8 months. In all that time, I have searched many times for a manual for it and would have settled for an exploded parts diagram of it but never found either. Despite not having them, I decided to do a detailed strip of it this evening to give it a long overdue complete cleaning.

Manual or no manual, it needed to be fully taken down and cleaned and I pretty much got to everything. I must say this is one of the most simple rifles, as far as number of parts - disassembly and assembly go, that I own. The only things I did not take apart were the sights and the bolt. While I did remove the firing pin from the bolt, I could not figure out how to take apart the rest of the bolt and figured why chance breaking it especially since parts would be hard if not impossible to find. As for the firing pin removal, that was easy, it is held in place by a screw. If though, any of my readers are knowledgeable of how to disassemble the bolt, please do let me know and I'll get to that pronto.

Putting it back together was almost as easy as taking it apart. Had I paid a bit more attention to how it came apart I would have been certain as to how to put it back together instead of just almost sure. Anyway, I got it right except for a washer that fell out of the stock when I took out the rear bolt that holds the wood to the metal. When I tried reassembly without realizing it was missing, the bolt would not slide back into place. After about 8 - 10 tries of doing this and that, I figured out where it was catching and that it had to be that screw. So, either I had mixed up the front and rear screws that hold the metal to the wood (and they sure looked to be the same length) or there was a missing washer. A look at the screw in front showed one was there, so I started looking around on the carpet and there was the one for the rear screw right at my feet. Once I put that in place and reassembled everything, the bolt went into place like greased lighting.

Once reassembled completely, I function checked it and everything worked fine. Because it would be easy to reverse the firing pin, I also ran a couple of 22 blanks through it to assure I had gotten it right. Went bang each time.

Note that I would have made a video of this if I had a camera that shot decent video. That camera went belly up some time back and a new one is on the wish list. When I finally get one, I may just have to do a video of the disassembly and reassembly of the WZ-48 because I have never seen one anywhere.

As for the WZ-48 remaining in my collection, I have been thinking of selling it lately, still am, but I am not as enthused about getting rid of it as I was before I stripped it and got it back together with nary a real problem. Still though, it is a single shot and as I said in my previous post about shooting it, it is tedious to load. I'll have to debate whether or not I want to sell it. For now though, I think a second trip to the range with it is in my near future.

Some Say The South Will Rise Again...

...and others think the Third Reich will do so. While those good old boys down south may have lots of guns & ammo, something tells me that the Germans may be better armed:
http://www.bbc.com/news/blogs-news-from-elsewhere-33381772

And I'd bet you thought this was going to be about the Confederate flag.