If I Apply For A Mortgage, Can I Self Identify...

...as being a person, belonging to one of predominant races of folks living in certain neighborhoods, to which Bank of America reportedly has seemingly (at least to me) said it will bestow interest free mortgages. More at the source.
If that is not racism, then I think nothing is racist. It may be needless for me to have to say it but I will say it anyway - if I had a bank account with them or had one of their credit cards or whatever - I'd drop them tomorrow!
Who is going to make up for the lost income that Bank of America would otherwise have made once these reported upcoming interest free loans actually come to be? The answer would be those who pay interest is my guess as in their rates will be higher - or even if they freeze at current rates, once mortgage interest rates go down in general, I would guess those paying off Bank of America mortgages with interest (as in those living in neighborhoods predominantly made up of European Americans, Indigenous people and Asian Americans) would not have the rates reduced.
Bank of Socialistamerica and leftist ideals is more like it or so it seems to me.
All the best,
Glenn B
Posted by Glenn B at 9/08/2022 09:01:00 PM 2 comments:

Could There Be Any Truth To...

...this being the last message by Queen Elizabeth II? 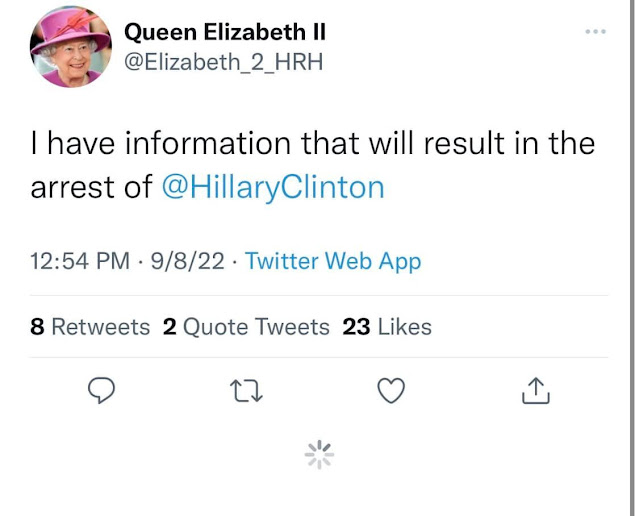 I hope her soul & family will forgive me but I could not resist posting it once I saw it. I don't know if it's real or fake but it is funny regardless of the circumstances (and who knows, it may have some truth to it).
RIP Queen Elizabeth II.
All the best,
GB

The Queen Is Dead - Long Live The King...

...but with all due respect to Queen Elizabeth II  or her successor - why should anyone here in the USA give a shit about who is the monarch in England (Great Britain) since that person is nothing more than a figure head who is still held in high regard in England at the behest of those in power so as to keep control of the populace! Anyway - a bit more on her passing here at the source and I am certain that the news will be full of articles about her passing for at least several days to weeks to come.
Now, do not get me wrong, the Queen of England seemed like a truly nice lady but in reality she was little more than a way for those in political office in England to continue enforce what amounts to serfdom over millions of subjects. That she was such, is a reminder of why our nation was born: Instead of being a nation of citizens serving a government, our nation evolved into being a nation in which the government became the servants of the people. It is tyrannical scum wannabes, and I do not say that lightly, like President Biden, Representatives Pelosi, Ocasio-Cortez and Senators like Chucky Schumer who have forgotten that and who try to make the people of these United States subservient to them instead of them being subservient to us! Come election day - do not forget they are supposed to serve us and we need never bow to them unless we abdicate our power over them.
I am an independent when it comes to political affiliation but after hearing Joe - China/Ukraine/Russia  Loving - Hunter protecting - Fucktard - Biden denounce MAGA Republicans as a major threat to our Constitutional Republic (note it is not a democracy by definition, as he likely would call it) I can tell you - I am 100 percent opposed to anything a democrat, liberal, socialist, commie, leftist can come up with as a way to run this great nation whereas before this I may have given some of their ideas some thought. No, we were never perfect as a nation but bear in mind - there is no other country in the world to which folks wish still to immigrate like the US of A. There is a reason for that - our liberty to exercise our rights and laws that assure our rights and liberties will, or at least should, not be tyrannically controlled by the government.
Nonetheless, I hope that Queen Elizabeth II RIP. She must have done more than a little right to have lived for 96 years and to have been loved by so many for so long.
All the best,
Glenn B
Posted by Glenn B at 9/08/2022 04:21:00 PM No comments: