Make Sure You Vote

Your vote can prevent this: 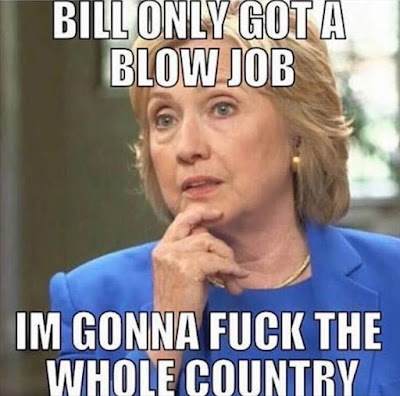 The Renewed FBI Investigation - My Predictions

The way things have been going with the federal criminal justice systems,  especially the FBI and The Department of Justice's handling of the Clinton email probe, I am going to guess/predict that the latest FBI investigation will again result in the exoneration of Clinton but will have the added benefits to her of:

1.     The FBI alleging that Donald Trump is a security risk and Russian spy.


2.    The FBI presenting allegations to the public that Donald Trump shared sexting messages with Anthony Weiner.


3.    The FBI making allegations that The Donald grabbed Huma’s private parts (witout telling us how much she finally enjoyed a real man) while Anthony Weiner watched from the closet.


4.    The FBI alleging that Trump grabbed Hillary Clinton’s private parts pussy after which, at first, Bill will vehemently deny he was ever grabbed by Donald. Bill will finally admit, in a tearful speech during an interview conducted by Anderson Cooper on CNN three nights before Election Day, that he was in fact manhandled by Trump several times.


5.    That the FBI has filed charges against Donald Trump for felonious mopery.