Me - I Enjoyed A Root Beer Tonight...

...but maybe you decided to enjoy some Flavor Aid or Kool-Aid in some weird type of memorial remembrance of November 18, 1978. It was on this date, 40 years ago today, that the Jonestown Massacre took place (more at the source). The Jonestown Massacre reportedly was the highest single day's loss of the lives of U.S. civilians due to a single act of violence prior to 9/11/2001 (more at this other source).

As I have often said, it's the weird holy-men (like cult leaders) and politicians (mostly lawyers) who will be the death of us all. Sadly, that was all too true at Jonestown.

Just thinking about it was more than enough to turn me onto a Root Beer.

The picture's main subject was something else entirely in the upper third of the original photo, that part has been cropped out of the shots I am showing here. As I looked over the original, I saw something that intrigued me so I zoomed in some to take a closer look.

In this first shot, only the upper third of the original photo is missing, it is unimportant except to give some idea of scale; the part in the cropped phot that is of interest to me was about 20" or so across. The area in question is the oval shape about 1/3 of the way up from the bottom in this cropped version. Do you see anything in that area? Click on the pic to enlarge it, look again. 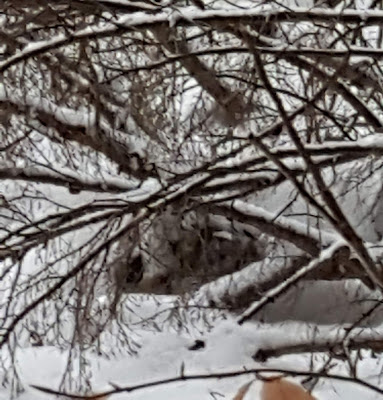 A deer I was watching was heading right for that
spot as if curious about something in that area.
Here is a closer view, pretty much just the oval area. Do you see something of interest now. maybe it is just my imagination but I see something I never expected to see. Maybe just the shadows and light playing tricks or maybe there are a few surprises there. Again, click to enlarge.
Here is the same shot, with the contrast adjusted a bit, maybe it will help.
What I see, or at least what my imagination makes me think I see, are at least five dogs, four of them puppies and maybe one older although it too could be a puppy. The heads are the most visible thing on four of them but I will be damned if each I am seeing does not have the proper anatomical proportions and seem to have eyes, muzzle, snout and ears and on one it seems I can make out the forelegs, on another the whole body and its head & right legs. Now the imagination is a wonderful and wild thing but damn I'd swear I see them.
Nope, I have not been smoking any whacky weed nor taking any mind bending meds nor drinking. Use your imaginations a bit and you may see them too.
All the best,
Glenn B
Posted by Glenn B at 11/18/2018 03:29:00 PM 1 comment:

It's A Little Difficult Believing An American Said This...

...but of course now that he has said it, and now that he has received thousands of comments criticizing what he said, he is claiming (in the typical manner of a politician) it was mere sarcasm. Somehow though, it makes one seriously wonder just exactly what has our government become with people like him in it.

The he in question is U.S. Representative Eric Swalwell (D-CA) and what he in essence said was that firearms owners could never win in a war against the government because the government has nuclear weapons. He allegedly made that remark after a gun rights advocate said this about him on social media:

“So basically @RepSwalwell wants a war. Because that's what you would get. You're outta your f------ mind if you think I'll give up my rights and give the [government] all the power," Joe Biggs tweeted at Swalwell.
This prompted Swalwell to defend himself, saying it would be a “short war” because “the government has nukes,” implying the government would use its nuclear arsenal against its own citizens."
More at the source.
Guys like him, in government, are exactly the reason that they who wrote and signed the bill of rights included the 2nd Amendment.
All the best,
Glenn B