Gun Buying - It's A Disease

Yet how is a man, even one of modest means such as you humble host, expected at any given time in his life, whilst being in possession of even some meager financial means, to pass by such an offer as the one from this purveyor of fine arms: 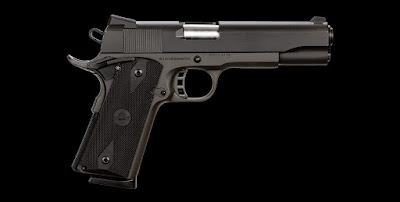 At only $369.99 plus $9.99 flat rate shipping you probably will not find a better price on a Rock Island Armory 1911-A1 Tactical .45 Auto Full-size Pistol 51431. Even with the FFL fee added on,  none of my local dealers could come within $50 of what would be the total price. Hopefully the deal will have still been available and the link will have worked for you if you fancy yourself a person of some financial means and as aficionado of armaments. Let me just say, I tried an eighth time and I will leave it to your imagination as to what happened on that attempt. So, no, I am not about to say whether or not I purchased one but I at least will admit that I both salivated and quivered simultaneously at said prospect.

Abedin Off Of Campaign Trail...

... as in no longer accompanying Hillary Clinton but instead seen dropping her son off at school (source). Do you think Hillary may be a little leery of keeping her around if there really are 650,000 emails on Weiner's laptop. Just imagine if even just a few are classified and went through Clinton before winding up on the pervert's laptop. The suspense is killing me - come on Comey get your agents' arses in high gear.

All the best,
Glenn

...are reportedly stored on the laptop that was being investigated as part of the sexting investigation of Anthony Weiner. While I think that to probably be a high overstatement (just my guess) I suppose it could be that there are actually that many emails on it. Mind you, that laptop was apparently shared by Anthony Weiner and his spouse Huma Abedin and also reportedly contains emails with a .gov suffix, which is indicative that government emails are stored  on it.

Just yesterday or the day before, I saw it reported somewhere that an ex British diplomat of some sorts supposedly stated that he is 100% positive that the emails leaked by Jason Assange of WikiLeaks were not hacked by the Russians nor supplied to Assange and or WikiLeaks by the Russians. I believe he was reported to have said so after he met with Assange.

What sweet irony it would be if it were discovered that the hacked emails (and I mean each and every one of them  pertaining to Clinton, her aides and the DNC) were among the 650K of them on the computer under investigation and that Weiner and or Abedin were responsible for the all of the disclosures to WikiLeaks. Just a thought that is quite pleasing for me to imagine as true even though probably very far fetched but a man can dream. Time will tell I suppose.

The FBI Reportedly Has A Warrant...

...to further search the emails on the computer seized during their sexting investigation of Anthony Weiner, the same computer on which the FBI has discovered emails with .gov email addresses(source). If that is the case, the case against Hillary Clinton could become quite interesting if any of those emails were sent or received by her on her unauthorized server. That would be especially so if they contain even one bit of classified information. As for Huma Abedin, Weiner's spouse, this also is potentially big trouble for her as she essentially, as I understand it, testified that there were no more government emails on any of her computers.

Of course, this could also simply mean that Weiner had .gov emails on the computer because he had been in contact with someone with such an address. That could be interesting in and of itself but my bet is that Clinton's emails are on that pervert's man's laptop.

With What Charges Can Hillary Be Charged

Former U.S. Attorney Rudy Giuliani should know and there are a bunch of such charges.

Time To Start Drinking Some Yuengling

The owner of Yuengling breweries has endorsed The Donald and as a result many are boycotting that brand of beer (source). Leave it to the leftists to punish someone for their political stand. Anyway, that is enough reason for me to support his company and say screw the leftists.