It's Probably My Last Full Day In Arkansas...

...and I am sitting here in my son's apartment as he zones out on Call Of Duty. Truth is, I just sat down. So far today, I have eaten breakfast that Brendan cooked (sort of - he made some bacon on a rack in the oven - and damned fine was it), done the dishes, gone to Walmart to pick up some things (a rolling pin, some flat fix and a tire gauge (would have sworn I had both in my trunk but damned if I can find them now), a t-shirt for my grandson, some fishing lures (to add to Brendan's tackle box) and some music CD's (they were an afterthought) and then went to the gas station to fill up the Corolla's tank for my upcoming journey home. Got back to his place and started making an apple pie - it's aroma is wafting out of the oven as I type. Then I cleaned up the mess from that and I sure do make a mess when rolling the dough - flour everywhere. While in the process of making it, I got in touch with the wife to get the temps right for baking it. Started drinking right before or was it right after that! Go figure.

Once that pie is finished baking, we have to figure out what to do to kill a few hours. I am guessing we will go out to eat. Of course, we could just have salad and some sandwiches here (do not have fixins for much else). I think going out would be the thing to do. All in all it's been kind of a ho-hum, not to special day, even though my last day here. That is a good thing, I think. This way there will not be too much of a let down when I have to leave tomorrow. Life just goes on as usual (well that is bullshit - I kind of, sort of, just about miss Brendan already and am still here with him).

Anyway, after we eat later, I need to fold my wash or just throw it in my bag. Then I have to clean out my car's trunk only to fill it with all my stuff to make the trip home. hen I think we will both drink some more and probably watch Trailer Park Boys. If nothing else we enjoyed together on this visit - it was Trailer Park Boys. I never even heard of it before this trip; yet, al I can think about it now is how did I never watch this before! I am up to season 8 and I think season 12 just started showing on Netflix. Of course, we had a lot of fun together doing other things when Brendan was not at work. Did I mention, he started a new job the day I got here - so we have had evenings and weekends together only. Then again, at least he has weekends off on this job as opposed a to when he worked for Pepsi when he often got split days off. So, we have been able to go fishing a couple of times, shooting another, to a friends house for a party another, out drinking and dining a few times and so on. Yesterday we went canoeing on the Caddo River with a canoe from Caddo River Camping & Canoe. Great outfit and a fine river on which to canoe and fish. Brendan's buddies Walter & Joseph came with us and we had a goo time. Between us we caught only three fish but that was okay, the camaraderie made it for us. That is usually the case, isn't it!

...the only reason politicians want to take away our guns is so that they can control the populace without opposition. History shows that as true again and again and again regardless of the balderdash they spew about protecting you. Protecting you and keeping you from being killed - by psychos, dirtbags, criminals of all sorts - has nothing to do with it because banning guns has nothing to do with ending illegal violence.

Take for example London England where virtually all self defense type firearms have been banned. The murder rate there has now surpassed that of New York City and guess what are being used to kill people there - edged weapons (more at the source). So tell me all of you on the gun banning left - what would you have them do in London? Would you have them register assault knives or just ban them outright! Oh yeah, that's right, they already have quite restrictive laws on what types of knives you may possess and when you may possess them.

Maybe the real answer would be dealing with the filth of society that cause most of the violent crime. 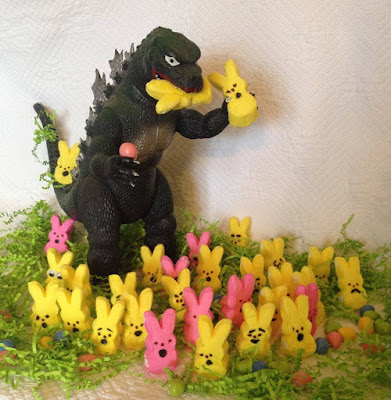 A Happy Easter Wish & A Belated Wish of Happy Passover

If you are the type to be angered by someone celebrating their religion freely and who are offended by folks openly practicing - go fuck yourself - that includes members of other religions whose dogma is to wipe out those of different faiths. Nope that may not have been very religious of me but I am an agnostic at most when it comes to religion; yet, people celebrating their faith, without harming others, does not offend me like it does the snowflakes.
Their psyches are delicate and everything other than what they mindlessly believe offends them.