Revisiting A Photo That Has Always Intrigued Me

This photo has been around on the Internet for awhile now. I stop to take a look at it each time I come across it in a list of images of armed woman. I don't know if it is just the good looking new age model, or either or both of the fine old age weapons (whether or not reproductions or truly old) that she is holding or the combination of all three but this photo has always intrigued me as to why I like it so much. 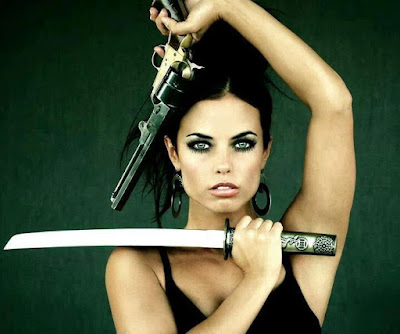 I don't recall exactly how I disagreed with some of his politics, then again, I don't recall everything with which I found myself in agreement with him. I clearly remember though that I agreed with most of his politics because he seemed to truly be a very patriotic American. Fred Thompson has passed at the age of 73 due to a recurrence of cancer (source).

My condolences go out to his family, loved ones, friends and associates. He was a fine American.

I Disagree That Obama's Sending Only 50 Special Forces Troops...

...to combat ISIS, on the ground, shows his lack of commitment or that as Lindsay Graham reportedly put it: "Sending 50 American Special Forces into Syria in the eyes of ISIL shows that Obama is not all in." See more here.

Really, I don't think it shows that at all. Instead, I truly believe that this action on the part of Obama is a strong indication that he throws virtually his full support into that crisis - just not on the side of the United States or its allies but rather on the side of ISIS.

ISIS is the biggest threat to world peace that currently exists. Sure, right now Russia and China could pose a bigger potential threat as could any alliance of several smaller nations against us and our current allies. However, right now - the biggest actual threat to world peace, the one most likely to cause WWIII, is what is going on in the Middle East regarding the constant advancement of ISIS and all the petty muscle flexing by nations that are supposedly fighting against ISIS. Hell, it seems that not only will our president not make an all out effort to oppose and destroy ISIS, he cannot even call it by the name it is called by the rest of the world. I think the man is a buffoon, a wannabe tyrant, and maybe that he is quite possibly a traitor or at least headed that way. It certainly seems to me that he is leading us toward disaster.

Of course, I could be wrong. He might be hiding is true intentions as opposed to George W. Bush who telegraphed, for months, the attack on Iraq before actually commencing it; thus allowing anything that should not have been there to have been removed to someplace else like Syria maybe). I would be surprised though if Obama actually took sufficient steps to annihilate ISIS by way of committing sufficient troops on the ground with actually effective orders of engagement.

I did not take all that many pictures while at the bloogershoot in WV last weekend; that was mostly because I was shooting or spotting for Brendan. Anyway, here are most of those I have.
﻿

I only got shots of 7 out of 22 shooters or so; I have to say my shots on target went better than that. While I kind of, sort of, maybe wish I had taken more pics, especially of Brendan, I really enjoyed what shooting I did. That just took up my time that otherwise would have gone toward taking pictures but after all it was a bloggershoot not a photo-shoot. You can see additional photos, taken by other attendees, here and here.

If No One Else Was Impressed...

...I have to say that I impressed myself while shooting my Remington R1 (1911) at 100 yards when at the bloggershoot in West By God Virginia recently. What really made me happy was that I was not using a rest and thus was shooting off-hand and hit the target as many times as I did. You cannot see it very well in this video but the target consisted of two adjoining steel plates one above the other; they were just to the shooter's right of the two paper targets that appear on the left. In all, both combined were about the same size but maybe somewhat smaller than one of those paper targets.

My shooting was not perfect but I am still pretty happy with how I shot. If you want to know how many times I hit the target, with one mag full of seven rounds, watch the video. While Brendan only started filming after the first few shots, I fired off seven shots in all. I found hard to believe that I could even see well enough to have done that well, let alone not shaking too much at my advanced age ;>) to have gotten that many hits. Shot another mag before that to get my bearings so to speak, hit a decent number of times that first mag-full too.

I was even more impressed with Brendan's shooting. I have a video of him taking six shots (some of the mags were new and it was hard to load all seven rounds in them) at the same steel target from 100 yards. He hit with 4 out of 6 shots. Considering he hardly ever gets to shoot a pistol, so far this was only his third chance this year and never at more than 30 yards, him getting 4 solid hits at 100 yards was purdy darned deserving of praise from his dad - that being from me. He got it!

Gotta love it - keeping an American tradition, our rights and liberties alive by passing them on from father to son. I am proud of my boy. Yes, he is a young man but still always will remain my boy to me; if you are a parent you know what I mean. Anyway, he understands it.

...over $400 for two concert tickets but just shelled it out (by way of plastic) a few minutes ago. Brendan and I are going to see Black Sabbath - The End at the Jones Beach Theater in August 2016. (Hell, I never thought I would have to buy tickets that far in advance for anything either.)

I was the first of my friends to ever get a Black Sabbath album (their first one and a few more after that) and have to say I have liked them (with Ozzy in the group), and Ozzy on his own, ever since. While I am not a groupie nor even an avid fan of the group, I have to point out that I think their first album is the best all time album to which I have ever had the pleasure of listening.

I saw them in concert many, many years ago, I think at MSG, and so, I debated seeing them there again this coming February. Since MSG is quite anti-gun and I don't want to travel into NYC unarmed - all I could say about that was fuck giving MSG a dime. So I decided on seeing them at the Jones Beach Theater in August 2016 regardless of their firearms policy (which I am pretty sure is that it's a no gun zone because it is in a state park). I picked there and then since it is much closer to home despite chancing a rainout or that one of them will drop dead by then causing a cancellation. Of course, I could be out of the picture by then too - who knows!

Anyway, that's the venue and time frame for which I bought tickets. Maybe I should have bought a third ticket for resale to try and recoup some of the expense for the other two. Have to think about that a bit but quickly before they are sold out.

...it was 3:30 but it didn't matter to the dogs, they were still running on their biological cocks and had to go out to pee. Then I woke up at 5:30 and it was 4:30 but it felt like 5:30 to me (about the time I crawl out of bed on weekdays lately to go to work). Then I took a couple of aspirin to help my aching back and the next thing I knew, I was climbing out of the sack at 9:30 but it was 8:30. Then I had the thought, that was inspired by the lines at 3:02 of this version of Roadhouse Blues by The Doors, that maybe just today the end may be held off for an hour longer. Then I reset my clocks.