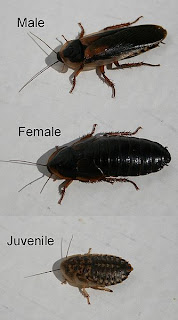 Yep, I have an order of 500 Blaptica dubia roaches  crawling being delivered to my house tomorrow. Mm-mmmm, tasty goodness. They grow up to about 2 inches long, are really meaty, are not too chitinous and have just the right amount of crunch. I cannot wait until they arrive because I am looking forward, ever so much, to getting a really nutritious meal into my belly
Bearded Dragons and Crested Geckos.

My order will consist of all nymphs. No, not nymphos but young roaches, each ranging in size from 1/4 to 1/2 inch long. Within  about another two to four months, they should be adult sized. By that time, I figure to be rid of most of them and be left with just enough adults to make up my second breeding colony. Yes that does mean I already have  breeding colony going but I want to augment that one with some fresh meat.

The lizards love them but I was wondering how they would go down, with a beer, after frying them in a pan with bacon.

This Email Is A Pisser

Content of an email I received from a friend today:

"My wife hounded me for months & months to fix our damaged gutter downspout, but when I finally fixed it... she was hopping mad! 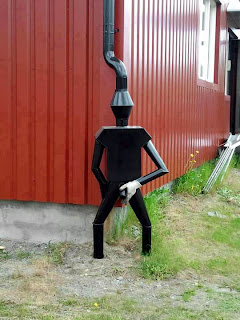 Thanks to Don S. for sending me that one. I have got to say, the guy who created that has a great imagination and is either single or must have a very loving wife if he is still alive.

...instead of calling them terrorists and to call the Holocaust ethnic cleansing instead of genocide. This reportedly happened in Lumberton High School down in Texas. (source).

To call the killing of the Jews - let alone the killing of the Gypsies, Poles, Russians, dissidents, mentally deficient Germans, criminals, nuns, priests, and all the others - ethnic cleansing is far, far, far beyond the scope of stretching the truth to its furthest limits. Then for the superintendent of the school district to have said, the teacher, who so instructed the students, did nothing wrong was following state guidelines and followed that up by saying:

"“What is more dangerous – fear and ignorance or education and understanding,” he asked. “From our standpoint, we are here to educate the kids.”" (source).

He thereby implied that the lesson is the truth and that anyone calling the Holocaust genocide, or calling the 911 hijackers terrorists, are liars. How could that school system ever even imagine using a term that makes the murders of 6 million Jews seem as if it were a wholesome thing, as is implied by the word cleansing! It is to me beyond the scope of truth, decency and sanity. Are not those the same words used by that murderous bastard Hitler about what he was doing by way of killing off approximately 12 to 13 million in the gas chambers and camps! Now the schools are borrowing and using the words of one of the worst demented criminals, of all time, when they teach about such things. Educators shamelessly twisting fact into some morbid fantasy is, even some of them evidently proud of having done so, is in my opinion, heinous and terribly disgraceful. Emulating the speech that Hitler used  for himself to help justify the Holocaust is inexcusable. I do not think the school system in question should
continue to do so and I beleive that people like the supoerintendent or they who tought up this curriculum deserve to continue their employment. They may well deserve what they may well wind up getting; I would hope that would be getting fired and losing their teaching credentials.
Of course, years ago, there might have been another alternative offered by the local community whose children were taught such crap. When men were real men, before having been pussified by money hungry lawsuit generating lawyers and ultra-liberal politicians, a few fathers, or even older brothers, of the school kids quite possibly would have beaten the hell out of that teacher and his boss. If so, then not surprisingly, the case likely would never have been solved by the police. Not that it is right mind you but I can almost envision it happening even today if crap like that keeps getting pushed at that school. I would hope not but such things d tend to raise the furies.

To be fair, I must point out that some students reportedly have said that the teacher seemed extremely uncomfortable teahing that but she apaprently felt compelled y the educational system to do so. How the teacher felt though does not excuse the lesson plan nor the statements of the superintendent. I think it would have been much better had the teacher refused to give the lesson in the first place. But such is America, the land of spinless whimps and uber-leftists.