Ever Wonder Why Obama Is Purging The Military Of Its Top Brass...

... or why he puts inept but very ambitious stooges into seats of power in which they are totally unqualified to sit let alone run things (ie: Janet Napolitano, Rahm Emanuel, Kathleen Sebelius, Eric Holder, Van Jones and the list goes on), or why he has left our borders so porous in terms of lack of security, or why he allowed weapons to be smuggled into Mexico with no way to track them, or why he bows to the leaders of other nations while incessantly apologizing for the USA, or why he wants to cede our Constitutional rights and liberties to rule by United Nations treaties or why he pushes so hard for socialized medicine as to think it a good idea when a Congresswoman says if you want to know what is in the bill - vote on it and then read it, or why he refused to place his hand over his heart during the recitation of the Pledge of Allegiance or the singing of the National Anthem, or why in his campaign speeches, before he was first elected, he promised the creation of an armed civilian force as strong as the military should he become president, or why he is so rabidly anti-gun as to sign a treaty wit the UN to limit our second amendment rights, or why the government recently bought hundred of millions of rounds of ammunition for its civilian forces. Please don't tell me you have never at least wondered nor that you have not arrived at some conclusion as to why he is such a leftist. And please don't tell me you really think it is for the good of our nation.

There is only one plausible explanation and America, it is about time you admitted it to yourself: 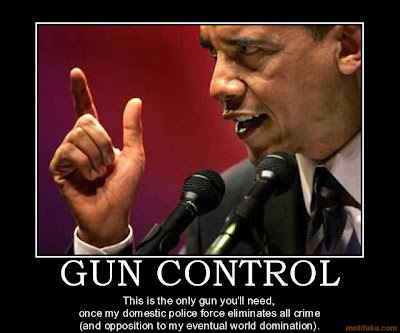 I think you could put any of his policies at the bottom of that poster, they all point to the same thing, but until he takes away enough of our guns and has enough stooges in political office and in military command positions and in civilian enforcement positions, he will not be able to achieve it.
All the best,
Glenn B﻿