What Caliber For Groundhog? 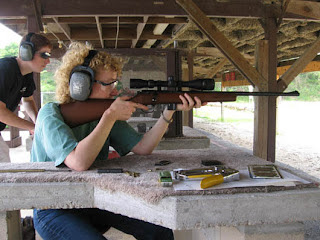 Okay, so its Groundhog Day. Yeah I know, I wrote a nice piece about it earlier, but I was just over at The High Road, and someone brought up the fact that no one had psoted a thread asking "Which Caliber For Groundhog" today. I thought that was rather an interesting subject. So which caliber would you choose if hunting the elusive, and oft times hard to kill (see the movie Caddy Shack), groundhog?

As for me, I'd probably use a rifle in .22WMR caliber. Sure it means you have to get prtetty close, but if you can get in with 50-75 yards, you should have a good chance at a kill shot.

Once you decide how to kill it, one other question arises - how to cook it!

Now that I have added the picture of my wife with a scoped Marlin 25MN, let me just add: wouldn't it be wonderful if I could get her to shoot them, clean them and cook them. As it is I only ever got her to the range once; but she is one heck of a great cook.

Today In History - The Treaty Of Guadalupe Hidalgo

Yes folks, if you are not up on your history, or have not guessed the importance of today’s date (besides it being Groundhog's Day), well today's date, back in 1848 that is - was the one about which all modern day La Raza type Mexicans are so pissed off. The day on which the Mexican-American War came to its final outcome, the day Mexico ceded over 1/2 of its territory to the United States of America after having its ass kicked been defeated by us militarily. The one which was actually the result not of initial American Aggression against Mexico, but of the then Mexican Government's own aggression against her own people, and Mexico's promise to declare war on the USA if the USA annexed Texas. Texas, which by the way, had become a Republic but only after Mexicans who lived within Coahuila-Tejas first broke away from Mexico, taking Tejas (Texas with them and allowing for it to later declare itself a Republic). Confused, let me explain.

You see the hostilities were started by a corrupt and oppresive government, the government of Mexico. Mexicans of the state of Coahuila-Tejas in then northeastern and centraleatsern Mexico revolted against President Antonio López de Santa Anna and his government. You may remember him, he is the one who in charge of Mexico at the time that the Mexican Army attacked the Alamo. It all started in 1835 when people of northern Mexico in Coahuila-Tejas province revolted against Mexico's new oppressive regime (can you imagine that, an oppressive government in power in Mexico). Well the following year, those in Tejas (Texas) declared themselves independent, extended their border down to the Rio Grande, and they soon formed the Republic of Texas. In 1845, the US Government annexed Texas and since Mexico had threatened war with the U.S.A. if such took place, a lot of border battles followed.

Eventually in 1846, the U.S. Congress declared war against Mexico. Our nation then proceeded to whoop their behinds, and I would guess that calls of "Remember The Alamo" may actually have been cried out in some of the ensuing battles. The war went on for about 2 years, that is until U.S. forces under General Winfield Scott invaded Mexico at Vera Cruz, advanced through Pueblo, and then took Mexico City. Mexico City fell in August 1847. A treaty, of the same name as the city in which it was signed, between Mexico and the USA was signed in the city of Guadalupe Hidalgo on February 2, 1848.

The treaty ceded over one half of Mexican territory to the U.S.A. This was a devastating defeat for Santa Anna and the Mexican people; yet Mexico had been urged by other nations (world powers at the time) such as England and france not to war with the U.S.A. as they too, like the U.S.A. recognized The Republic of Texas as an independent country. This fell on deaf ears in Mexico. As a result the U.S.A. got California, New Mexico, Arizona, and sections of Colorado, Nevada and Utah. Mexico got 15 million dollars in return for war damages. The U.S.A. did not take Texas from Mexico then, since it had already been annexed by the Congress as the Republic of Texas; but it did assure that the Rio Grande was the southern border of Texas. Rest assured this treaty strengthened the fact that Texas was no longer part of Mexico.

One other thing, the U.S. agreed to police its side of the border. This is part of an international treaty, something that the Constitution regards as the law of the land. Isn't it funny though how our politicians have almost assured that our side of the border is not properly policed, and an invasion of U.S. soil from Mexico continues to this day. What a shame. Well, if you did not know already, now you know why members of such extremist groups as La Raza, and some Mexican extremist are pissed off at the U.S.A.. Not much of a country as far as I am concerned, not much of an ability to raise armies, and sore losers at something they started through their own mistreatment of their own people. Now they are mad at us because our country brought it all to a conclusion. Sort of like the Muslim extremists, emotional memories of bygone years that will never be again no matter how hard they try. Why won't they succeed, because of the ultimate resolve of the American people.

I have got to say though, that with the help of our politicians and the like, they have almost succeeded in gaining back those ceded parts of Mexico. Note I said ALMOST. As long as We The People are strong in our resolve to remain Americans, then we will do so. Don't give up the fight.

To see where I got most of my info, and to see more detailed information on tis subject, see:

http://memory.loc.gov/cgi-bin/ampage?collId=llsl&fileName=009/llsl009.db&recNum=975 (shows a readable copy of the treaty)

For years I have insisted that February 2 should be a National Holiday. People have looked at me strangely throughout those years because of my insistence about the importance of today's date. Well all of the above is just another reason to have Groundhog's Day named as a National Holiday in the USA! I mean - don't you see the connection betwixt the two -GroundHogs' Day and The Treaty of Guadalupe Hidalgo!

All Hail The Mighty Beast...

...who lives half his life hidden away from our eyes shrouded in mystery, he whom the multitude seek out on this winter day, to whom the millions look in anticipation of his predictive powers, all hail the Groundhog!

Today should be a national holiday - heck it should be an international holiday, maybe even a holy day - all because while the groundhog commands our attention in such overwhelming numbers, he does so without demading, or even expecting anything of us, except maybe for our affection on this one day out of the whole year. If so many people around the world can look to this little weatherman for guidance - there has got to be something to it - and I sure don't mean his ability or inability to predict whether or not we get 6 more weeks of winter weather - because folks - whatever he says - mother nature often contradicts. So what power is it that the groundhog holds over us, to hold millions wrapt in anticipation of his predictions. I'll be darned if I know, but it sure is something. By the way, this year, the most famous groundhog of them all Punxsutawney Phil has predicted 6 more weeks of winter and even with such a bleak outlook before us, millions love him.