...but not a rubber one to bounce. In fact I have 33 new balls - Ball Pythons that is! No I am not an eccentric kook who keeps exorbitant numbers of animals, I bought these so I can trade or sell them later, and maybe even donate a few to a herp society. 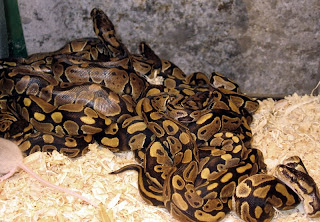 Ball Pythons are also called Royal Pythons (Python regius). There are about 15 of them in the accompanying pic, all babies, and if you click on it to enlarge it you can see about 6 heads if you look closely. They are a smaller sized python, they reach about 4 to 6 feet long maximum. Not all pythons are the giants of jungle lore, in fact most are much smaller than the Burmese Pythons that can reach fairly incredible lengths. The Ball Python comes from western Africa, and is found in such countries as Ghana, Sierra Leone, and Nigeria to name but a few of their home countries. They thrive in grasslands, and lightly wooded areas; and do a good job of keeping the local rodent population in check - as rodents are their main source of prey. They are a fairly docile and timid snake, thus they got their name from the habit they having off forming their bodies into a somewhat ball shape when threatened. What they do is form a ball, and the head searches out a hole into which to escape if possible. Of course they can also strike and bite, as my fingers could tell you if they could talk, though most don't bite.
These are one of the most commonly bred snakes in captivity; yet export of ball pythons is also a regular trade. Exportation of them occurs in great numbers at this precise time of the year. As opposed to what you may think, export of Ball Pythons probably does not currently pose a risk to their populations because of laws in place to protect them. These laws, in effect in countries like Ghana, require that captive ball python females be allowed to lay their eggs in captivity. Then a certain number of the hatchlings are allowed to be exported while the remaining percentage of them are returned to the wild. So the great majority of imported Ball Pythons appearing in any country outside of Africa are what are called captive hatched, or captive born (as opposed to captive bred and born). The ones I got came about in this manner. I do not import them, nor buy them from an importer (would be a conflict of interest with my job to do so), but rather I buy from a wholesale dealer who probably bought them from the importer. In effect I buy them only after they have entered the internal commerce of the country, and this keeps my employer happy because then there is no conflict of interest.
What I will do with them now is get them to shed, eat their first few meals, and then hopefully sell them at a small profit to help support my reptile and amphibian keeping hobby. I'll try to sell them at my local herp (herpetological) society meetings, at a local Reptile Expo, and maybe to some pet shops. If I am lucky, I will not go broke feeding them before I sell them. Some will also likely be donated to the Long Island Herpetological Society as prizes for our monthly meetings. I also may trade one of two of them for something that catches my eye, but they probably do not have much trade value. Finally, I may wind up keeping two or three and then attempt to mate them in about 3 years from now when they would be of breedable size and age (that is for ones well cared for while kept in captivity, wild snakes probably mature more slowly due to environmental conditions such as food supply or lack of it, droughts, diseases, parasites and so forth).
Ball Pythons come in many color morphs or variations. Some of these are genetic variations and are highly prized in the pet industry. Dependent upon the morph, a ball python can sell for anywhere from about $10.00 to $20,000.00 (maybe more). A few years ago, the most rare of the morphs was selling for well over $100,000.00. There is big money to be made in the reptile business if you are a specialty breeder. Then again I can make a little money too, but certainly not a whole heck of a lot; and with luck I'll make a few dollars profit on each snake. If not then hopefully I will at least break even and have had fun dealing in them.