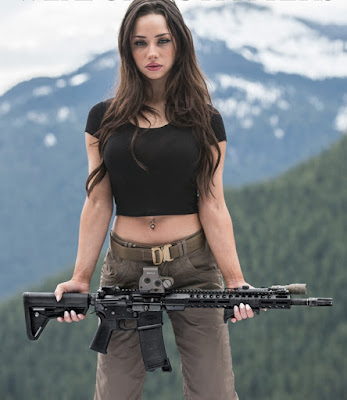 Hoping to see sights like this in Alaska, oh what a view!

There I Was Thinking I Inventoried A Lot Of Ammo Last Night...

...and then I read this article saying that the U.S. has shipped more than 5,000 tons of ammunition to Germany. While I may have thought I moved around a few tons of ammo last night, it probably was closer to  a quarter ton's worth. I cannot even imagine seeing that much ammo at once let alone where I would store all of it.

I guess we owe thanks to Obama for the largest shipment of ammo to a U.S. base on foreign soil in the past 10 years; that after he rekindled the Cold War single handedly. As a matter of fact, the article says the shipment was made in response to Russia's military actions. Thank you Mr. President, I had always hoped my kids (or any kids they may have) would not have to live through all the fears and concerns one has during another Cold War, but you made sure to screw that up royally. I guess the fundamental change you wanted for America included putting us back at least 40 or 50 years in regards to national security and you have done a fine job of it!

Come to think of it, maybe you have another motive, making ammunition almost impossible for loyal, rights and liberty loving Americans to obtain. Or was that just a side benefit of dropping us down several steps in our standing in world affairs and national security?

I Worked Feverishly Into The Wee Hours Of This Morning...

...doing an ammo inventory. For some reason, I found myself feeling miserable last night. I could not get a wink of sleep and was hitting the head about every 20 minutes or so. I decided that instead of just pissing the time away watching TV, (yes I was weeing about every 20 minutes, my water pill yesterday must have been overpowered or something like that), I would do something that needed getting done. So I inventoried my ammo.

There were at least a few times, when I came to my senses, and I figured I should stop and get some sleep, especially once it hit about 1:00 AM but then I had the overwhelming urge to hit the head again. So, I just stayed up and kept doing the inventory. It wound up that I was finally able to get some sleep at about 0400, maybe 20 minutes after I had finished the inventory. I figure that I inventoried everything in my ammo stores except what I have in a grab & go ammo can. I am not going to tell you my total round count but say that I am fairly impressed with how much ammo I have. Granted that about 30% of my ammo cache is made up of 22LR but while that used to be something frowned upon nowadays it is pretty nice to have enough 22LR on hand to last me at least through at least a few years of shooting. The rest of my ammo store consists of 22WMR, 32 Auto, 9mm, 45ACP, 223, 5.56x45mm, 7.62x39mm, 7.62x54R, 308 WIN, 8mm Mauser, 35 REM, and 12 gauge slugs, buckshot and game loads between 6 and 9 shot.

Gone are the days when I also had numerous calibers of ammunition for which I owned zero guns. I traded or sold off that ammo when the ammo buying frenzy under Obama's first term and early second term was ongoing (I maybe would still be doing it if I had any left over). Sometimes I kind of sort of almost regret having gotten rid of all the ammo in calibers for guns I don't own or ammo Brendan and I rarely shot. I had things like 380 ACP, 38 Special, 357 Magnum, 40 S&W, and a lot more 223 than I have now (I got rid of most of that in favor of 5.56x45mm). I don't think there is really a shortage of any of them now but the prices are so high now, I could have made out like even more of a bandit had I waited to sell them. Besides that, it was nice to know that if I ever needed any of those calibers, I had them on hand, I don't have them now though.

What I do have though, is a good number of rounds I actually shoot though my own guns. One thing I discovered, that I need to take aim at, is that way too much of my 9mm JHP ammo is pretty friggin old and needs replacement. I just ordered 500 rounds of Federal Hy-Shok 115 grain JHP rounds today as a start in that direction. Once I have enough of the newer 9mm JHP rounds on hand, I will start using the older ones as practice ammo. I am not all that concerned that the older ammunition would fail at the range but why take a chance with ammo that is used for self-defense. Some good amount of it has to be from the mid to late nineties, and one batch of a few hundred NATO spec rounds I have, and some small amount of JHP, is probably from as far back as the late eighties. Modern ammo is not like the old corrosive stuff that could last for half a century or more; the modern stuff is said to have a shelf life of only about 25 years at best (although I don't believe that but why chance it being right or not). Nowadays, I mark my ammo with the year I got it on the outside of the boxes. That way, I can shoot up the older stuff as I acquire newer ammo and not have to guess at how long ago I purchased it.

As for the inventory itself, man it takes and awful long time to go though a footlocker and numerous ammo cans chock full of sooty goodness. I was at it from around 10:00 PM through 3:30 AM. This inventory took somewhat longer than others, not only because of the amount of ammunition I counted but because I decided to make good use of Microsoft Excel. I am most definitely not an Excel master, not even half good at it, but I figured out how to do a passable inventory using it. I included columns for caliber, bullet weight, bullet type (such as FMJ or JHP), manufacturer, year of acquisition, number of rounds, and notes I felt should be included. Then I used an auto tally function for to sum up the amount of rounds in each caliber, sometimes even subdividing them more by doing it separately for JHP versus FMJ rounds in each respective caliber. Not only does the Auto Sum function add up the numbers but if you change any given amount to a lower number, it also subtracts and shows the difference. That way, if I shoot 150 rounds of 45 Auto JHP, of any given brand I have listed, I just change the inventory count for that particular brand of ammo by the appropriate amount and the Auto Sum feature gives me the new total number of all of my 45 ACP JHP rounds.

Now that I set that up spread sheet, my inventory process will be an ongoing affair each time I use ammo and the totals for each caliber will be readily available to me without having to do an actual count. That is so long as I remember to subtract however much of each specific caliber, type and brand of ammo each and every time I shoot up any of it. Hopefully I can get Brendan to do the same. If we do that, it is going to save me from having to do several hours of tedious boring work every six months or so.

Well So Much For Going To The Range Yesterday...

...to check out my recently acquired Mossberg 44 U.S. (a). I guess I was not thinking much when I posted that I would be going to the range. Had I given it a moment's thought, I would have remembered that I let my daughter use my car so she could bring hers to the auto-body shop. Her car was arse ended and is in need of some hefty repairs as per the estimate. While it looked from the outside as if only the bumper was smashed in on one side, the guy at the shop said the floor of the trunk is buckled from the impact. He also said the actual bumper under the bumper cover may need repair or replacement. I am guessing that will wind up being an expensive repair job. At least the women who drove her car into my daughter's car has insurance (well, she produced an insurance card anyhow). A police report was filed and the police did not want to hear anything from either driver, they indicated that the other woman was at fault for rear ending my daughter's car. That is a ray of hope, the woman's insurance will likely be paying everything.

The other good thing is that neither my daughter or he other woman were injured.

So, as it wound up I stayed home. I found something else to do though, I did an inventory of my ammunition. More on that in another post.