Not Too Bad For A Lefty

In fact, Brendan's friend Pat was pretty good shooting my Remington 870 and doing it left handed.

Yeah, his first shot was a bit off to the right (took off some of the bark on his right-hand side of the tree) but at least two of his other shots, if not all, were just about dead center. (And yes it was a dead tree and I say that for the tree-huggers but even more so for the shots-ricochet-off live tree types cause I do not ant to hear your BS criticism when it is not warranted.) The distance was guesstimated to be about 30 yards or so.

Anyway, both Brendan and Pat had fun shooting the 870. Yet, neither shot more than 10 rounds through it since the masculine youths today are not manly men like us of old. Of course, being a manly-man with an 870 is one of the reasons my adversary Arthur I. Tis comes around so often to slap my shoulders, especially the right one.

...would probably react much differently than they preach should a bear break into their home not once, not twice but yet a third time in three consecutive days. Add to that the fact that the bear not only damaged the homeowner's property but injured her dog. The animal loving whackos are rabidly berating the homeowner fot having the bear shot. Some of the more radical among the Bambi  Believers have reportey posted the woman's address online and some have made death threats against her. More here.

I think she did the right thing and hope she and the guy who shot it both enjoy the steaks.

Democrats Are So Tolerant...

...that it puzzles me as to why this is true: 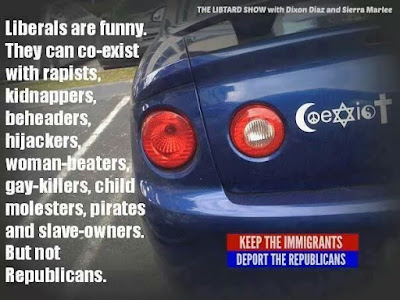 William Tell or Not...

...it appears that I put the crossbow together right. It sure seems like I have had it for a long time without getting to shoot it but I finally got around to some this weekend. Only shot it enough to assure it was working properly and on the mark. 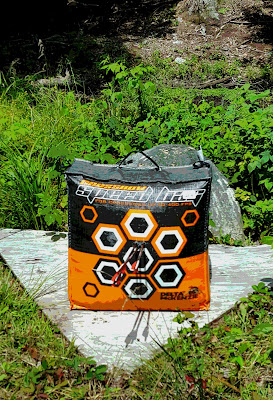 The three bolts in the pictured target were fired from about 20 to 25 yards. I also fired a shot from about 50 yards, that one was several inches high, so a sight adjustment may be in order. I should get to that this week since I am planning a trip to relatve's place where I can shoot it. I might not be up to shooting an apple off of anyones head but think it will do the job on a whitetail deer or black bear.