She called me yesterday too, then to tell me that they were mailing me my lab work results from my most recent office visit. I figured that must mean all the test were negative otherwise they would have said something. She called for something else today!

Let me start with why all the blood-work and such. Well, I had been feeling progressively more and more miserable as each day went by for several months - since at least around last October or November (even as early as July or August but the symptoms came and went back then now that I think of it) up through August 12th just recently. That day, my doc sent me to the ER where they diagnosed me with a urinary tract infection and shot me up with a huge vial of some antibiotic. They also prescribed me ten days worth of another antibiotic - huge pills.

I was amazed because the day after I received the shot, I felt a hundred times better than I did while in the ER. Two days later and every pain in my body, pains I have been having in my joints, inside my bones, in my muscles & terrible headaches - all since about a year ago - disappeared. My lightheadedness, outright dizziness, loss of balance, severe headaches, night sweats, absolute fatigue, utter weakness, inability to remain awake - all had gone the way of the dinosaurs - not one was left. Then about 6 to 8 days into the antibiotic pills they had prescribed for me - the aches & pains started to come back  just a little, my blood pressure started going up and down as if on a roller coaster (and that got better for several days after the antibiotic shot in the ER), I got somewhat lightheaded again and started falling asleep unable to stay awake a few hours after getting up in the mornings. It's been just like before I went to visit the ER just not as severe - more like it was back in October or November fairly early on once the fatigue had set in. I have been slowly getting progressively worse again since then.

So, I went back to the doc. I explained I was starting to feel progressively worse again, almost all the same symptoms. I asked her if maybe - just maybe - I had had more than a urinary tract infection, possibly two diseases and the antibiotics did not kill the other one. I also asked if it was possible that the UTI had been caused by a more severe underlying illness. Much to my surprise she agreed with me and was going to run some tests, then suddenly said my insurance would not pay for the tests she wanted to run unless they were ordered by an Infectious Disease Specialist. I said "Why not" because my insurer always pays for everything a doctor finds medically necessary. She disagreed so I called my insurer. They said she should jab away and take all the blood she needed from me. She did, well her lab worker did anyway. The gal in the lab filled several vials with my blood.

She wound up testing me for: COVID-19 both the illness and the antibodies (three tests for them), syphilis, chlamydia, hepatitis, HIV, Lyme Disease (three tests), Non-Treponemal screening, Neisseria Gonorrheae (the clap? - not likely - it's been that long) Rocky Mountain Spotted fever, RPR Rfx On RPR Conform (?), Tick Borne Disease Panel, Treponema pallidum Antiobodoes, a CBC and urinalysis.

Then today, as I said above, I got a call from the nurse as I was writing my blog post immediately prior to this one. She said the doc got some additional tests back today and that I have - drum roll - Rocky Mountain Spotted Fever. I'll be damned if I had not told her and my prior doc about having been bitten by ticks before this all started but they only checked my for Lyme disease back before this round of tests - just like the docs did in NY before moved down here had tested my for Lyme.

I have got to say, I am ever so happy they have it figured out (hopefully they found the only cause and nothing else is also causing my maladies) and they can give me the right medication to kill it. My concern now is not that the nurse told me I will probably get the squirts from a 20 day course of Doxycycline but rather that I am a bit worried (not too worried though) that the bug may have built up a resistance to antibiotics after the stuff they gave me recently that obviously only had a temporary effect on it. Come to think of it, last spring, I was seeing a Rheumatologist before leaving NY for much of the same symptoms that included a lot of red sots on my feet and lower legs (that I had for a couple of, or a few, years now along with joint & muscles pains). When I first left NY, I styaed in AR with my son. I was put on antibiotics while staying at my son's place because of similar issues and got better for a couple of months. Then it started again around August - I wonder if I have had it all along, even when still living in NY.

Whatever, whenever, they finally discovered the cause of my sickness and I hope it gets wiped out with the result of me feeling much better once again. Time and future blood tests will tell. My big hope is that my heart will go back to normal once I am cured. My guess is that is what caused it to beat less efficiently that normal (only diagnosed a couple of months ago close to the height of me feeling miserable and the cardiologist just chalked it up to high blood pressure and my age) - once again time and another test will tell.

If you have ever owned a gun with a case colored receiver, you probably know that the case color can be damaged to out right obliterated quite easily. It does not take much to destroy it. I have a Marlin 1936, 2nd variation - B prefix, up for bids over at GunBroker.com and I am hopeful that the amount of remaining case color will be it's number one selling point. I have seen some other specimens of this same model sell for around the same price to some selling for much more than I am asking and they had zero remaining case color. 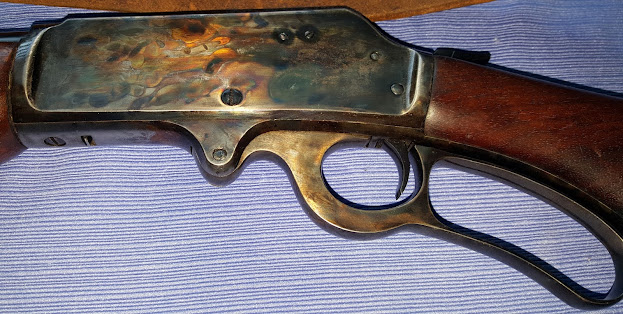 No, the case color is not perfect but there sure is a lot of it remaining on a rifle that was manufactured in 1941 (as best I can determine). Someone took rootin-shootin good care of it and I did likewise once I bought it. It, by the way, was another acquisition I made from the Hessney Auction Co. LTD of Geneva, NY.