My Browning Citori Lightning Shotgun Is Up For Sale

I have decided to sell my Browning Citori Lightning, Grade I, 12 gauge, over/under shotgun. If you are interested in viewing the auction, it can be accessed via this link:

The reason I am selling it is to get some money for an AR-15 build on the stripped AR receiver I just won. See my post, about that, immediately prior to this one.

This post is not an offer to sell nor a for sale advertisement, it is merely an informational post about the auction of my shotgun.

I hardly ever win anything and I mean that most literally. I am lucky to have won a total of $300 (or less) over the course of having bought thousands of paper lottery tickets and scratch-off tickets. I rarely win in Casinos. I have bought tickets, each year for several years, for firearms raffles and have never won anything. Likewise with most other raffles I have entered. When I do win something, it is usually on the low end in monetary value or usefulness to me.

Then again, every now and then, some good luck shines through my black cloud and the rainbow's end falls at my feet. I recently made some donations to Kilted To Kick Cancer through Jay G's fund raising efforts. He had some very nice prizes up for grabs for they who donated at least $10. For each increment of $10 that you donated, you got an entry for the prize drawing. Let me just say, because I had only made a few smaller charitable donations earlier this year, I decided to make a a more sizable set of donations through Jay's efforts to kick cancer; after all I have a personal vendetta to fulfill against it. Thus, I had a bunch of entries.

The prize that I won, or a reasonable facsimile of the prize I won, can be seen below (click it to enlarge): 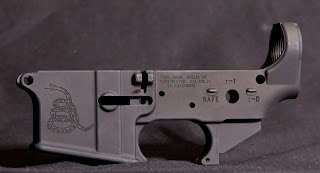 I said reasonable facsimile because that is not the exact receiver that I have won, it is a sample. What I have won, is an AR-15 stripped lower receiver, donated by York Arms. York Arms will do custom serial numbers, caliber markings, and Safe/Fire selector markings as well as magwell engraving as part of this prize package. I have some things in mind already, like maybe Ballseye's Boomer (or Blaster) right under that same but a bit smaller sized serpent and maybe SAFE and ARMED for the selector switch positions. I am thinking of my initials followed by my birth date as the serial number or maybe Ballseye696 (696 was a once lucky number for me). Of course I have to be legally eligible to receive it through an FFL (as of this past weekend, at the time of my last NICS check, I was still legal and hopefully should remain so).  I have the FFL in mind, they only charge $25.00 and do excellent transfers.
Now I have to decide if I want to take the chance of trying to build an AR-15 myself, from a kit, or if I want to have Wally at York Arms build the rifle for me. Kits I have seen go for about $450 to $650. I am not going to go for anything fancy, pretty much a standard, or so I am thinking. I would guess, that the kit plus the labor, would probably amount to around $650 to $800 for what I want but have to check with the company on that to be sure. The $450, if I do it myself, sounds a whole lot better but that means it might not be finished for years and that there will be a lot of cussing going on in my basement each time I try to get it done. Still though, I am going to check on how to get it done and if it looks simple enough, I may try it.
Any advice, that anyone would like to offer, on whether or not I should try to build it myself, would be appreciated in the comments section.
All the best,
Glenn B
﻿
﻿