Excellent Way To Mount A Scope... 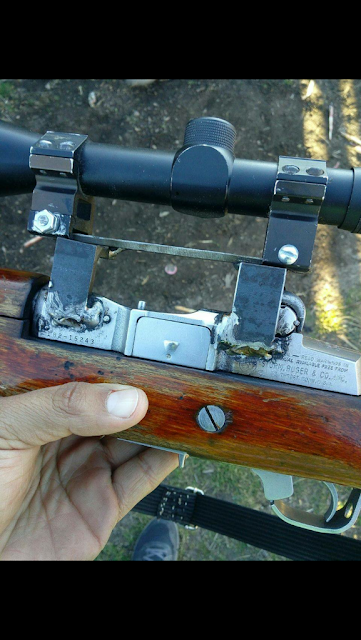 ...NOT!
Just imagine bringing your rifle and scope to a friend, Bubba, so he could mount the scope for you. I cannot say with certainty that I would kick Bubba's arse but the thought surely would cross my mind. Thanks goodness I have no scopes that need mounting and if I did then luckily I have no friends named Bubba because then I might wind up going to jail for assault or worse.
All the best,
GB﻿

To All My Readers Of The Jewish Faith

When you return from temple tonight, I wish you gut yom tov or chag Yom Kipur sameach - both in essence meaning happy holiday and specifically the second meaning a happy Yom Kipur. Might I add: I hope you had an easy fast.

NY City Democrat Board of Elections Commissioner On Voter ID

Get a load of this video before it is removed from YouTube. It is allegedly a video of the NYC (or Manhattan - a borough in NYC) Board of Elections Commissioner essentially blasting the policy to allow voters to register and vote without showing valid ID. He also blasts NYC Mayor Bill de Arsehat Blasio's policy of issuing NYC ID cards to just about anyone with little or no verification of their identities. Furthermore he readily admits the practice exists of bussing voters from one polling place to another to cast multiple ballots on election day. This guy is a democrat but I have to hand it to him, he is quite candid about the deplorable system we have in place to register voters and then to allow them to vote.

I must point out that I work in a place where aliens are processed for U.S. Citizenship & Immigration Services. Many of them write down United States when asked for their country of citizenship, yet since they are aliens none are U.S. citizens but are either residents or some other classification of alien who is living in the US. I inform them they are aliens and not citizens yet quite a few recently have asked me how they register to vote.

We truly have lost almost all sovereignty as a nation. The U.S. in essence has no borders, is made up of diverse cultures that refuse to unify but would rather do the liberal thing of celebrating diversity instead of unity, and that refuse to come together under one language - American English. We are doomed as a nation to become a third world country controlled by diverse factions akin to the various clans under the tyrannies of the warlords of Afghanistan. The lunacy of the left, in ultra-leftists states like NY, is killing our country and the electoral process.

Back in April, Capital One Bank notified my wife that they suspected someone had opened, or attempted to open, a credit card account in her name. Luckily for us, no charges had been made. This week, we received a letter from Trans Union saying there was suspicious activity on her credit report. I checked both of our credit reports and saw another inquiry made by Capital One just last month on each of our reports. I called Capital One's Customer Service department. I explained the situation and the representative put me through to their credit card department saying they had to handle this.

I got a rep in the credit card department and was told there is a credit card in my name, never got around to checking on my wife. The Cap One rep said he had to call their fraud department, explain the situation to them, and then put me on the line with them. I was on hold several minutes and was then disconnected, just my luck.

I called Capital Ones' Fraud Department. The rep there found all the info about the current mess already typed into the system by the rep I spoke to earlier. Then the rep told me she was in the general fraud department but I had to speak to someone in credit card fraud department. She put me through to yet another rep in credit card fraud. That rep said the fraudulent account was closed and had been closed in April 2016. Apparently his grasp of the current situation was nonexistent. When I explained, he said there had been an account in my name in April but that was closed. he said he would check on the current situation since the rep in the credit card department had told me (during my first call) that there was a new fraudulent card in my name. The rep on this call did not see that new fraudulent card and again said he would check but it would take 20 minutes and he would call me back.

I also explained that I had tried to input my ID into their phone system but it would not take it because it said my telephone PIN was incorrect. I know my PIN, I use it frequently. Evidently the fraudster changed that too. I made sure to tell the capital one re I needed to change that ASAP so as not to lose any money in my accounts He said he understood and would get back to me in 20 minutes. Now I wait.

Anyway, I cannot believe the ineptness of Capital One in as much as they issued yet another fraudulent card in my name (and I am guessing also one in my wife's name) after the fraudulent activity back in April, less than a full 6 months ago. In addition, I cannot believe that the guy in credit card fraud could not see that a new fraudulent card was issued in my name, apparently since last month, yet the rep in the credit card department easily brought up all that info and typed notes into their system about it and the other rep to whom I spoke between those two, in the general fraud department, saw those notes immediately. I think it may be time to start looking for a new bank wherein to keep my money!

Update: So, the rep from Capita One's credit card fraud department called me back. He said there has not been a card issued in my name since a fraudulent one in April. He has no reasonable explanation as to why my the earlier rep told me there was a new card issued in my name. he also had no reasonable explanation as to why my PIN did not work except to say I must have forgotten my number. That is extremely unlikely as it is the same number I have used recently and frequently probably for too long. I decided to change the PIN which required yet another call. At least the call to change the PIN went relatively smoothly. I also made yet another cal and ordered a new ATM card and suppose I should change my PIN on that to.

Still though, as I said above, I may have to shop around for another bank in which to keep my money, what little of it I have needs to be safe and when you get conflicting info from a bank as did I, well then, something stinks in that bank.

Unemployment Versus Being Out Of Work

Read about it here, this is excellent:

By the way, if you are too young to know who were Abbott and Costello check them out at IMBD and then watch one or three of their movies. Three of my favorites starring that duo are:

The Time Of Their Lives

So Much For My Most Recent Ammo Order...

...being that the ammo dealer cancelled it. They say that decision was not political and had to do with their "shipping contracts". I don't quite get what refusing to ship ammo to NY has to do with shipping via UPS but then I do not have a contract with UPS, maybe some companies do have contracts. The person who replied to my inquiry as to why my order was cancelled promised to bring it up at their next board meeting and who knows, maybe they will start to ship ammo to NY. With all the liberals living here, I almost cannot blame them if they don't want to arm the opposition.

I guess it all just means I have to continue my search from some decently priced 8mm Mauser ammo elsewhere for now.