My Daughter & Her Family...

...on their way to do some trick or treating.

Prayers Going Out For The Injured...

...and prayers also being said for those slain, and for the surviving families, relative to the rampaging member of the religion of peace terrorist who mowed down so many innocents in NY City today.

You know, don't you, that sooner or later, someone who is not a Muslim, is going to visit a mosque or Muslim neighborhood or mass gathering of some sort and bomb or start shooting or running over Islamists in great numbers. I am not condoning it but sooner or later it is going to happen in this country. I mean people can only remain oblivious to the truth of what is going on for so long before they take matters into their own hands to protect this great nation from who many see as belonging to the religion of terror.

As usual, I left something outside for the kiddies to enjoy for Halloween:

﻿ ﻿Nope, not an artist but had fun carving it.

Funny thing about Halloween this year, I've been pretty ill since last Wednesday but never lost my appetite. I was so sick though that when I thought of having a sweet snack, I forgot all about the stash of Halloween candies in our vestibule! More candy for the kids I suppose. 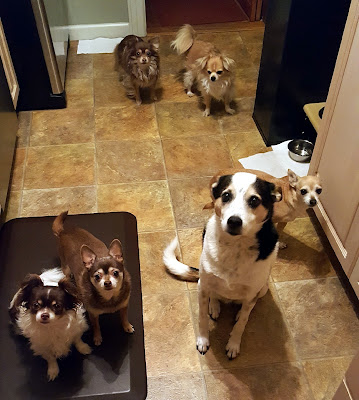 Ah yes, cookie time. And yes, we do have that many dogs running around out house. Those are our four in the foreground and my daughter's & son-in-law's in the back ground. What a joy to think that next weekend, those two in the background along with my daughter, son-in-law and grandson will be moving in with us for a couple to few months while waiting to close on their new house. Then shortly after that my mother-in-law returns from my brother-in-law's house where she has been on a mandated (so to speak) vacation.

Thank the heavens that we don't have a bird and a horse Great Dane too! Heck, just the bird would be way too much trouble.