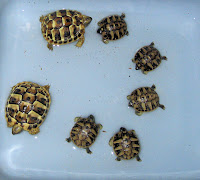 Here are a few of pictures (all clickable to enlarge) of my Hermann's Tortoises just for size comparison. First, all of the babies together in a watering tub. The smaller ones, all 5 of them, are less than a week old and all measure in at about 1.5 inches from end to end of carapace (top shell) straight across (not following the bend of the shell). The larger of their 2 siblings is about 2.75 inches long. I am not sure how much the larger one weighs compared to the smaller ones but my guess is that it probably comes in close to the combined weights of at least 3 of the latest additions. The bigger of the two larger ones was hatched on July 29, 2011 and the other on August 9th. They have grown pretty nicely since then.

The second pic simply shows one of the newest babies and the larger of their 2 older siblings. They grow pretty fast considering that the larger of the 2 older babies was born only 6 1/2 months ago yet is so much bigger than it was back then. 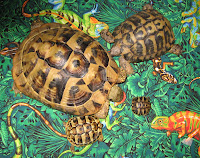 Compared to their father and mother though, all of the babies are still very small as can be seen in the shot of: the both adults, the largest of the babies and one of the recently hatched babies. Then again, even the adult male seems small when placed next to the adult female. She looks huge in comparison to the others. I imagine that the reason for the size disparity between the male and female is not the difference in their ages, the female being about a year or two older than the male, but the fact that the female produces eggs. Carrying around 4 to 10 eggs about 1/2 to 3/4 the size of a ping pong ball requires more space that could be allowed in that male. It even seems a tight squeeze for the female. She laid 4 eggs in her first two clutches (only one egg fertile in each of those clutches, resulting in the 2 larger babies pictured). Then laid 5 eggs in the third clutch (all fertile and producing the 5 of the youngest babies pictured). Then laid 2 huge eggs in her final clutch to date (both of those infertile or only discovered too late for them to have survived not being in an incubator).
If you are wondering why the female has her head pointed down as she does in the photo, it is not because she is ailing. She is trying to eat the strawberry colored dewlap of the anole that is part of the print on the tablecloth. Many tortoises, if not all, are attracted to certain colors and find them almost irresistible. Those colors are red, yellow and orange - the colors of many fruits and flowers. They are also attracted to other bright colors as might be found in flowers. If you allow a tortoise free roam in your home, it will be attracted to and attempt to eat, the toenails of any woman wearing sandals (no socks) who also has painted her toenails with red nail polish. It is always an amusing sight to behold especially if the lady is not expecting it and the tortoise too small to hurt her toes. (Never allow a large tortoise to even get close to painted toenails, especially those of a young child, the tortoise could possibly bite off a toe.)

Naturally, most tortoises love to eat fruit and flowers. One of the favorite fruits of my Hermann's Tortoises and my Redfoot Tortoises is the tomato although they love strawberries, cherries, red raspberries, banana, blackberries, cantaloupe, squash, pumpkin and so on. Except for tomatoes, which they may get a couple or a few times a week, they don't get other fruits all that much, maybe once a week or two. Mostly they eat green leafy vegetables like various lettuces. They also eat a good amount of other vegetables such as string beans, snap peas, peas, carrot greens, mustard greens, Brussels sprouts, cabbage (both green and red), broccoli and on an on. In addition I feed them tortoise pellets and some vitamins and mineral powders, all specifically made to promote a good healthy tortoise diet when fed in addition to the above foods.
All the best,
Glenn B
Posted by Glenn B at 2/20/2012 09:33:00 AM 3 comments: