"It's Alive" was the message I sent to my son this afternoon along with the first photo below: 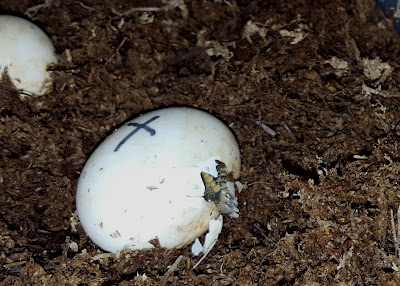 Later on, I sent this second photo to him, my daughter and my wife: 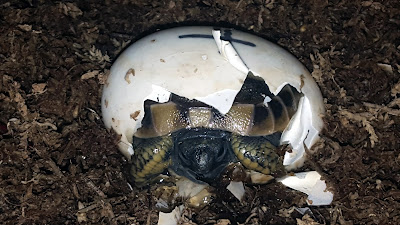 My current male Hermann’s Tortoise was hatched on either July 29, 2011, August 9, 2011. I had one egg hatch on each of those days from the first breeding of my then male and my then & current female. That male has since disappeared out of my backyard. My current male Hermann’s, one of those original offspring, is thus about 5 ½ years old. Well, he finally hit a home run.
My female laid five eggs back on November 6 th  and one was broken and a total loss from day one. While I was pretty certain that four were fertile, I lost them all due to too much moisture in the incubation substrate which caused the shells to over absorb water and crack. That was a hasty novice’s error, done while I was in a hurry to moisten it before going away for the weekend. I am no novice but we all can have a brain fart. The female laid again either later in November or in early December, that time I think it was three eggs. They went into the incubator and I was careful never to add to much water to the substrate. One was infertile and went bad within a month or month and a half, it too had cracked but likely from whatever foul smelling stuff was inside festering away since it had been infertile. Another seemed fertile and candled with a couple of veins showing but then ceased growing and died for whatever reason. The last one was candled as fertile after about a week or so and remained seemingly healthy.
That last one started to pip this afternoon. The baby tortoise at first stuck only a single foot through a hole it had made in the shell. Later this evening, when I ;last looked in on it, the baby had a nice sized hole in the shell with its two front legs, head and some of its shell exposed. It may stay like that for up to a few days before it feels ready to leave the shell behind and start its life out of the nest (incubator).
I am pretty darned happy even though it is only one baby, because it means my little 5 ½ year old male is not shooting blanks any longer. I am going to give him and the female a week without food and only water, then put them both into brumation for two months. That should assure he fires live loads later in the spring when I allow them to mate again. For all I know, the female could be gravid now but I want to give her a break and brumate her regardless. She can use the rest, I am sure of that.
As for the new addition, I will be setting up an individual tank for it.
All the best,
Glenn B
﻿
Posted by Glenn B at 2/06/2017 06:50:00 PM 1 comment:

Got A Cat - Need To Clean The Litter Box?

This guy has a unique method to clean the cat's litter box. Kids (and adults) don't try this at home, in fact - don't try it anywhere!

A hat tip to Cheryl L.

Russians Under Putin Have Invaded Korea???

Apparently, if we are to believe Maxine Waters, Putin apparently has advanced into Korea (which one North of South is unclear at the moment but then nothing this dimwit says is clear):