Those Were The Days...

...when a decent annual income was about $12,000, give or take a couple of grand, but with prices like these who needed much more than that. 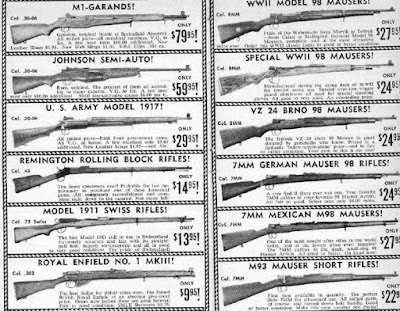 Now really, could you ever get an Enfield for $9.95!!! I remember them at about $79.99 apiece (I went back to the gun store with cash for two or three of them the day after I saw that price but by then the price was $119.99 or so! I literally was a day late and many dollars short.)

Keeping Myself Happy - I Got Some New Boomers

Was at the Hessney Early Gun & Military Auction yesterday and picked up a few new boomers.

First off I got a Norinco SKS. It still has cosmoline crammed into the action and I am guessing it is unfired - since it was arsenal refinished, it looks good but the serial number on the receiver does not match the one on the rest of the parts (they have the same number as each other just not the same as the receiver's).  Still, it was the best of three they were auctioning off as far as I am concernd.

Next up a Remington Model 29. It's a 12 gauge pump action shotgun. It is in good condition from what I can see. Not a very valuable shotgun but even then I got it for a song (as they say). They were supposedly manufactured from 1929-1933.

The third one is a Schmidt-Rubin Model 1911 as far as I can tell. It was incorrectly labelled at the auction as a Schmidt-Rubin Model 1889 but after doing a bunch of checking, I am confident it is a 1911. I checked all the proof marks and it passed all testing according to those marks. It also bears a "P" stamp which indicates that the soldier to whom it was issued kept it once discharged. Why there is a red band painted on the wood covering the forward end of the barrel is a mystery. Edited to add: For a few moments, I thought it might have been used as a training gun and had the firing pin removed, that was until I took apart the bolt and everything in the bolt looked to be in excellent condition and proper order. I would not have attempted that without instructions and I am lucky enough to have a copy of The Gun Book Digest of Firearms Assembly/Disassembly, 2nd edition; it just happens to have a chapter dedicated to the Schmidt-Rubin 1911!

Finally, I picked up one to toy around with, maybe refinish the stock and such. It is a Hopkins & Allen 12 gauge single. Don't know if this is safe to shoot or not with current 12 gauge ammo.

Not too bad on the pocket book considering that the Schmidt-Rubin, the Remington and the Norinco are in pretty good shape. As for the Hopkins & Allen, it is in fair to good shape cosmetically but I am unsure as to whether or not it is so mechanically. Heck, I am not sure the chamber size will even fit a 2 3/4" shell as some shotguns back then were chambered for 2 1/2" shells. Will need to do some checking and then if it safely can be fired with current production ammo.
All the best,
Glenn B