Hey Jo, Where You Going With That Gun In Your Hand

Yeah, I know, the Hendrix song is Hey Joe and not "Hey Jo" like it says in the title of this blog post. I wrote it like that because this post is for someone special. It's for my good friend Jo, one of the Farmer's Oval Schaefer Girls (you had to be in our circle of friends to understand). I just found out she is a shootist. Not only is she a shooter, she is a pretty darned good shot at that.

Hey Jo, just let me say that while you listen to this music video, I hope you have a Schaefer in hand, an ice cold one. They would go good together. 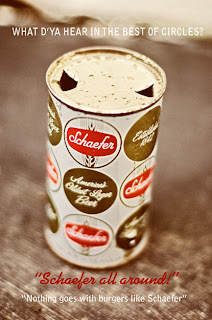 No Blog Posts Yesterday And Maybe No Others Today

I spent at least a few hours yesterday, in online chat and on the phone, with HP Tech Service. Seems my video controller/adapter is not working properly, so I got in touch with them. The guy in online chat could not figure it out and had me update the BIOS. As I explained to him, I tried to update the BIOS last month through HP Support Assistant when it notified me that a new BIOS was available. The computer did not start properly after that, I got a blue screen telling me the BIOS was not "...fully ACPI compliant...:. That led to HP Tech Service helping me try to do a system restore. That did not work. Then the tech rep had me do a rollback to the previous BIOS which did work. The next thing I knew was the laptop had the graphics card problem.

Well, the tech service rep insisted I try another BIOS update yesterday. I did as he said and again wound up at a screen telling me there was a problem starting Windows and that gave an option to start normally or to have the computer fix the problem. He said start it normally and again it wound up with the blue screen and the not fully ACPI compliant stuff. Of course, by then, I could no longer use the laptop and thus lost all connection to the HP Service Tech that had been in the chat with me.

I called HP Technical Service. I explained everything above to the tech service rep at least three times. He suggested a system restore. It did not work just as it had not back in January. Then he asked for permission to do a system recovery which would have wiped out any unsaved files on the computer. I asked if first we could do a BIOS rollback, and I explained that if it worked, I would save my files and then we could do the system recovery. He said he would put his supervisor on with me. Then he came back on the line and asked how to find the BIOS rollback. Funny, he had to ask the customer how to fix his company's product. So much for high quality tech service from HP. Well, I told him that I remembered the PC had to be restarted, while tapping F2.That brought up System Diagnostics and one of the options was BIOS Management. Under that, one could find BIOS Rollback. Wound up, I did the rollback and it worked at least to get me back to a working laptop although that did not fix the graphics card problem. The tech service guy said I should backup my files and he would call again the following morning at 10 AM. I backed up my files last night.

Somewhere in there (cannot recall if it was before or after the BIOS rollback) the tech service guy had me run a hard disk short DST test and some others. It passed all of them.  Well, today, while waiting for the promised callback from tech service (which never came), I decided to run some tests myself. There was a Hard Disk Long DST Test that he did not have me run. I ran that test, and a battery of others like a memory test, a couple of different tests of the hard disk and a WLAN test, under system tune-up that as one of the  options within System Diagnostics. All the tests except two were passed. One that was not passed was apparently not run as the result showed: Not Available. Tat was the Hard Disk Optimized test or something like that. The other test failed. That was the Hard Disk Long DST. My guess would be I have problems on the hard disk. Funny, once again it is the customer who figures it out and not the tech service reps.

As for tech service, I am still awaiting a call from the HP Technical Service representative to whom I spoke yesterday. I guess his 10AM is different than mine and maybe he plans on calling me at 10AM his time. Yes, I did tell him to call me at 10AM New York time. Oh well, time and a ringing phone will tell.