So My Son Asked Me: "Did You Get Me In Secret Santa"

And it wasn't like he was really asking me, ore like he knew. So, I asked him: You seem to know the answer already, who blabbed". He told me that everyone else who is participating in our SECRET Santa deal this year told who had wound up whom to give gifs. Too say the least, I don't see why we even bother doing it, I thought it was supposed to be a secret. All the fun has drained out of it for me now that he knows I am was to be his Secret Santa. Mind you, he was not fishing either - he knew - and I know he knew because my wife and daughter were blabbing a week or so ago about it and asked me whom I had picked out of the hat. At least I have no clue who will be my Secret Santa, I did not bother staying around to listen to the blabber mouths.

Another thing, that disappoints me, as well as at least my son too, is that everybody (except me) wrote down only one ting they wanted as a Christmas present. The way it is supposed to go is that you write down at least 3 or 4 things you would like to get and based on that list, your Secret Santa gets you one of those gifts or something else along those lines. Of course, if your Secret Santa knows you well, he or she may get something entirely different that they know you would also like but it is best to stick to the list to keep in line with the gist of it. My son thought it pointless that almost everyone, including himself, wrote down one thing (he wants cash for his savings account).

Knowing who is your Secret Santa and virtually all of the participants writing down just one gift idea kind of takes all the fun out of it. Of course, I may put some fun back in to it by not giving exactly what my son wants but something else I know he will like. No way I am not having fun by giving some neat gifts for Christmas especially since gift giving is truly what Christmas is all about. Any Christian who thinks gift giving at Christmas is something that strays from the true meaning o Christmas should think again. Let me tell it to you my way, or better yet, let tell it the way God expressed it:

It was on that first Christmas that Joseph and Mary received the gift of an opportunity to board in the manger and on that day that God The Father gave the gift of His only Son to us as the Savior of mankind. Thus it was that night when the angels heralded the giving of the Gift to the shepherds "For there is born to you this day in the city of David a Savior, who is Christ the Lord" - it was and remains our best gift ever. That gift giving should continue, not just on Christmas, but on any day, is supported by the fact that the wise men (number unknown but often said to be three) bore gifts to the Christ Child after his birth after they themselves had received the gift of a star, a sign in the heavens, to guide them. Right up until the moments before the death of Jesus, God gave gifts as can be witnessed by Christ giving his body and blood to us in the form of communion, and told us to continue to do so. It is a gift giving practice still practiced over two thousand years later by the Christian churches of the world. Yes, if you miss the fact that gift giving is what Christmas is all about, that it is indeed the essence of Christianity, I truly believe that you miss the whole point of it.

Merry Christmas to all, that is my little gift to you.

...as it is about 37 degrees right now but the winds are making it feel like 28. I am not opposed to winter although I must admit, I do not like feeling cold although I like going outside when it is cold (such as when I hunt, this year being the warm exception).

Anyway, up in this area is - since you usually go out and hop in the car to go to most places, then get out and go right inside, then back in the car to get out and go right inside your home - you don't usually dress appropriately for the temperature because you don't get a chance to feel it. If you get stuck outside at all, you get colder than you should be getting. I usually have an extra sweater in the car and a hat and gloves in my coat pocket in case I need them. When I go out walking any distance, like in the mornings on my way to the train station to get to work, I get dressed appropriately though try not to overdo it so I don't roast during the walk or once on the train. of course, if I ever get stranded anywhere in the general area, there are bars about every two or three blocks and I can always warm myself up with some fine spirits before continuing my journey.

I won't have to worry about feeling cold all that much after tomorrow though, at least for this week. It looks like spring will be sprung again and we will have an Indian Summer for the rest of the week. On Monday the weatherman promises temps in the 50s again with temperatures rising throughout the week to a high of about 66 on Christmas Eve. Doesn't look like snow for Christmas either, it's supposed to hit 56 that day.

...of an AK with the other subject matter in this photograph creates. Of course, that is not all I like about the picture. 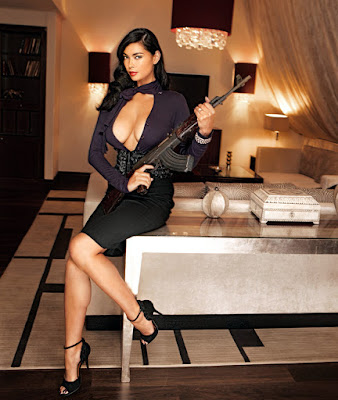 I Strongly Support The First Amendment...

...the one that enumerates some of our most important rights. That first one sits atop another equally important second one. The second is equally as important, even vital to us, in that it assures we maintain the capability to defend the first one from usurpers of our rights and liberties. My political leanings thus are well expressed by the sentiment on this young lady's shirt: 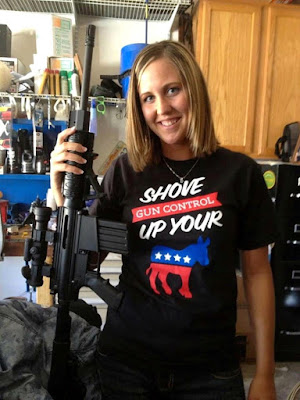 If You Are A Muslim And Want To Know Why...

...the rest of the world is suspicious and scared of you, and why many want to abolish Islam or at least kill all Muslim terrorists and those who support them, then read this because every words of it is essentially true:


IF WE COULD JUST FIGURE OUT WHO'S CAUSING THE TERRORISM PROBLEM?

Let’s see, do I understand this thing correctly?

They're happy in almost every country that is not Islamic!

And who do they blame? Not Islam... Not their
leadership... Not themselves...

...there probably was a misunderstanding. In her alleged attempt to bribe a Customs & Border Protection Officer, she seemingly misunderstood the concepts of true government service and integrity, on the part of the CBP Officer, and apparently thought she could easily corrupt him. A hat tip to the CBP Officer for not being one of the rotten apples in the basket but one of the best instead! See more here.