...and it only goes to show (along with this prior blog post) I am THE Great Procrastinator! In that post, back in January 2017, I first wrote about wanting to get a Ruger Mark IV pistol. Finally ordered one today - the Ruger Mark IV target, 5.5" barrel, blued finish, model 40101. While I am happy I finally did so, I have to add: Damn the inflated price I had to pay for it because of my procrastination! Of course, the early guns were recalled by Ruger due to a safety issue, my guess though is this will not be one of the early ones since they have been out for a few years now.

As for the higher price I had to pay: I look at it this way though - if Biden somehow is elected, or if the demoncrats take the Senate this November - the RKBA rapidly may become a thing of the past and guns may become impossible (or next to impossible) to purchase - so, it is a investment on which I was willing to gamble.

On August 2, 1876 - the place was Deadwood, South Dakota (actually the Dakota Territories at that time, SD became a state in November 1889 - source) - there was an infamous shooting. The man who wound up shot took a seat at a poker game, in the No. 10 Saloon, but as opposed to his usual seat of choice (that with his back to the wall) the only open seat had his back to the front door. He held a pair of aces and eights and I imagine he thought things were looking fortunate but things were about to go badly for him. While holding that hand, Hickok was approached from the rear by Jack McCall who drew a pistol and fired a single shot instantly killing Wild Bill. It is said McCall fired additional shots at others in the saloon but all the others were misfires. McCall was later hanged for this killing (source). More on Wild Bill Hickok here.


As you can see from both of those accounts, from the same website, the stories are somewhat contradictory but such is how it was in the Old West when stories appeared in cheap pulp novels and newspapers of the day - evidently the fake media has been with us for a long, long time.

One other thing about today in history, this time August 2, 2020: It was mere coincidence I suppose - or was it divine fate - when I donned this T-shirt this morning before walking Skye Knucklehead - my mongrel (and one of my traveling companions when Brendan, Skye & I visited Deadwood, SD in June). 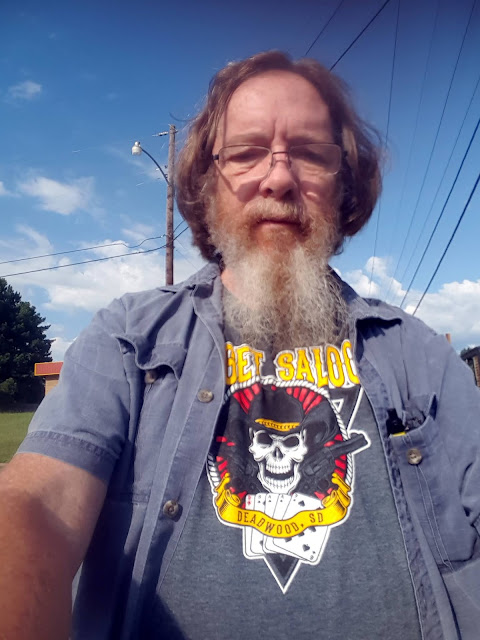 I took that pic only after looking at a 'This Day In History' link I came across online, I think at Fox News. Anyway wherever I found that link, I clicked on it and saw that Wild Bill was blasted on this day in 1876. It was several minutes later as we approached my apartment complex that I remembered I was wearing this shirt and I thought 'oh what a coincidence' - then I wondered 'or was it fate'. I sent the pic along with a text message to my son saying it was the anniversary of the shooting and told him of the odd coincidence/quirk of fate of me wearing that shirt today.

By the way, I highly recommend the Nugget Saloon (alternate info link https://www.deadwood.com/business/bars-and-saloons/nugget-saloon/). If you ever visit Deadwood and want a drink - great selection of booze - or a huge and fully loaded Bloody Mary - this is the place. Brendan and I enjoyed a few - and I think he had the Bloody Mary as I recall - all served by an excellent bar tender.