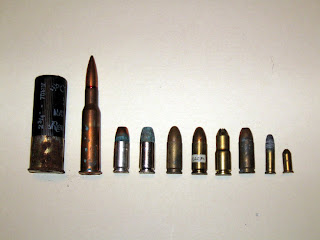 I store my ammunition in various places but the most used storage place is my basement. I have had some ammo for over 20 years now and I am confident that it would shoot as well as it would have on the day it was manufactured. Why? Well, I keep it dry and keep it away from sources of high heat and fire (this more to avoid a fire hazard than anything else). When you keep ammo dry - it can be stored for a long time and still be usable. How long? I would imagine, and this is just a guess on my part, that modern ammunition using smokeless powder and non-corrosive primers would last at least fifty to one hundred years, maybe more with no discernible problems if stored properly.

If you do not keep ammunition dry you will know it in a short amount of time. The accompanying picture of the ammo in this post shows you some light corrosion of ammunition caused only by the ambient humidity in my basement and my basement is one of the driest in which I have ever been. Can you shoot ammo like the stuff in my picture - sure you can if you are a risk taker. I do not shoot ammunition in that condition and I strongly recommend that you do not either. (By the way the two blanks would be okay to shoot they are basically only tarnished. Of course I would have to know the caliber first.) When shell casings are corroded there is always a chance of the casing cracking or coming apart when fired. When bullets are corroded there is a chance of one being stuck in the barrel. Ammunition in the condition shown could easily be cleaned of most of the corrosion, but why chance something going wrong with it when shooting it. I only recommend shooting ammunition that is in excellent condition. Yeah, I know, you know a guy at the range who shoots stuff like that all the time because he gets it for free from other people and he never has an accident. Well someday when you see him with a blown up barrel on his gun you may be able to figure out why. All it takes is one to go off badly to ruin your day, or if it results in your getting hurt maybe to ruin your life. Why take chances!
Of course if you insisted on shooting that ammo, I would insist that you did not shoot at least one of those rounds. That would be the one marked CLEM. Some wise guy in my office, about 10-12 years ago, decided to be a clown and left that one on my desk. No my name is not Clem, it is Glenn, but Clem was a goofy name that one joker sometimes called me. I imagine it was he who left it there for me, I have kept it as evidence treasured it since.
All the best,
Glenn B
Posted by Glenn B at 10/13/2009 06:57:00 AM No comments: