Went To The Range Last Night...

...at long last, to make sure that the scope on the Marlin 336 was still on target and that both Brendan and I were still adept with the 336 and with the Remington 870. Brendan shot the 870 first. He shot standing, bent over and supported by the bench from 30 yards (this was at our local indoor range and all shooting was done from that distance. I am figuring his group size for 5 shots was the size of my open hand. Not great but good enough by far for deer out to 50 yards (and I doubt we will get a shot at that distance). I shot the 870 too but from a standing, unsupported, position. I had five shots in a group smaller than my fist and was quite happy with that. We shot several more rounds each with the shotgun and then switched to the Marlin 336. It as last zeroed for 50 yards and thus is usually about 1.5 to 3 inches low at 30 yards depending on the ammo. I again shot from a standing, unsupported position. I fired three rounds and had two touching and the other about an inch away from them. Brendan's first group had two shots almost touching and another flier off a few inches to the right but on level vertically with the other two shots. We shot a few more rounds each of that and both of us are satisfied we are ready as we will be for a deer if we see one within range.  Within range will probably be 75 yards at the most, with shots more likely at about 25 to 50 yards, since we are hunting slightly to very hilly areas of fairly heavy woods. Thus I felt alright only going to the 30 yard indoor range to assure the 336's scope was still zeroed in. Believe me, I would rather have sighted in at 50 or 100 yards and I tried to find an outdoor range open to the public this past weekend during my scouting trip but had no luck.

We probably only shot for 30 to 45 minutes and then called it quits. Maybe we fired twenty-five to thirty12 gauge slugs and twenty to thirty rounds of .35 Remington between us. No need to waste ammo with today's high ammo prices and with ammo shortages a very real possibility at any time again. As a matter of fact, I was unable to find .35 Remington (for our 336) 200 grain, soft point ammo, at several sporting and gun stores I visited last weekend. Since then, I also checked a few online dealers from whom I purchase ammo on a fairly regular basis and they all showed they were out of stock of it or that they had only something, like the Hornady flex tip ammo that so far I have refused to use (but may have to stock up on soon because it is just about the only 200 grain .35 Rem out there). Ammunition manufacturers have pretty much opted to just forget about producing .35 Remington ammo during the current ammo crunch. Hopefully as things keep improving, .35 Rem will be produced in much greater quantities soon (and maybe the price will even come down a bit from its current prohibitively high costs for what little of it is available). Oh well, I think I have about 400 rounds of it now.

It's A Nice Sentiment But... 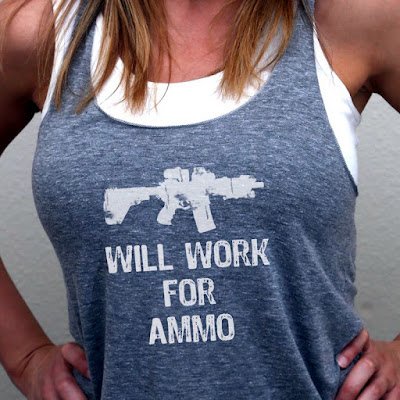 ...why work for it if you can get it for free (more or less). See my blog post immediately preceding this one about how to get yourself 2 free boxes of Magtech 9mm ammo by becoming an Ammo Ambassador through AmmnitionToGo.com.
All the best,
Glenn B﻿

Become An Ammo Ambassador And You Can Get Free Ammo

This evening, I received an email from Brandon Black of AmmunitionToGo.com. It was not a mass mailing although they may have sent out similar emails to the masses of RKBA defenders. I know mine was not included in a mass mailing since he asked how my trip to upstate NY had gone. He must read my blog (and that comes as a surprise to me).

Anyway, the folks at AmmunitionToGo.com have teamed up with the folks at Magtech and they are giving away 100,000 rounds (2,000 boxes) of what is essentially free ammunition at the rate of two boxes per Ammo Ambassador. Of course, that word 'essentially' I just used means there is a catch of sorts. In order to get the ammo, you have to do something. That something is rather admirable in my estimation. What you need follows and please note this is my summary of what they require and I am in no way guaranteeing you will qualify to get the ammo, I have nothing to do with that, I am just providing you a heads up about the program.

What you need to do is to print a copy of the target that they provide via a link, take a person to the range who has never shot a gun before, introduce that person to shooting (safely - my emphasis on safely but I am sure they feel likewise), have that person shoot at the provided target and then send a photo of the new shooter with the target to them along with a submission form that they require. The submission form requires you to enter a short narrative of the story behind the photo. If your entry is accepted, they will send you a coupon code for the free ammo with free shipping! The link to their page that cover all this is below, moreinformation there:

Note that I do not know if there is a limit on how many free boxes of ammo you can get. I am guessing it is limited to 100 rounds per Ammo Ambassador but that is just my guess.

As for me, now all I have to do is scrounge up someone who has never fired a gun and drag that person to the range to get this done.