My tortoise enclosure's hibernaculum (actually a brumation chamber as they brumate as opposed to hibernate) is complete. Well, it's almost finished; it needs a ramp or platform so they can easily get into it but they could do without if push came to shove.

Anyway, now my Hermann's Tortoises will brumate properly and thus the male's sperm count will likely rise quite a bit; hopefully to the point where he, as I suspect right now, no longer shooting blanks. Only one egg out of about 16 eggs the female produced in the past 3 years was fertile and that one died while incubating when left in the care of my wife for a couple of weeks when I was moving. Previously the female Hermann's tortoise had quite a few eggs that hatched successfully. The number one culprit, me not brumating them properly. They need a cool down period, each winter, to be fertile with any reliability. As for my male Redfoot Tortoise, he stays inside for most of the winter; while they may brumate in the most southerly part of their range, it's my understanding that most Redfoots probably do not or only do so for a brief and mild winter throughout most of their range. 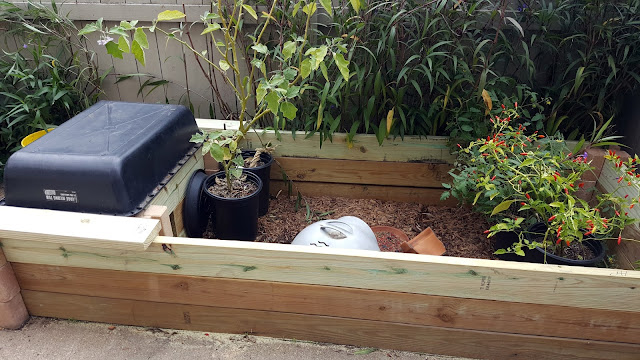 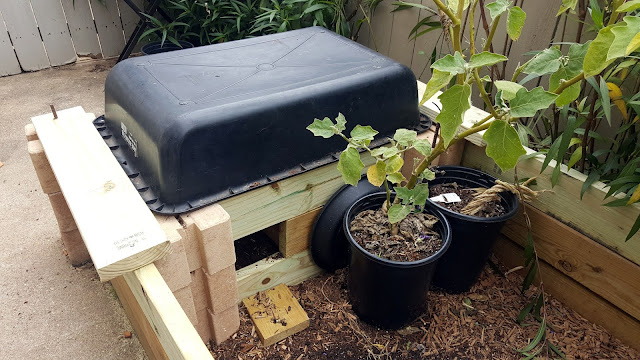 The overall enclosure has 8 foot long walls, each board is about 6" high and it is about 36" wide; the slotted blocks add a little more to the dimensions. It was one big enclosure before but I built in the hibernaculum (brumation chamber as they brumate not hibernate) recently and finished today. The brumation chamber has the black plastic tub so it will get some heat buildup on sunny days heat even if it gets really cold outside. The walls are built up with an extra 6" tall board and 1 block higher that were not there before. The bottom board, of the brumation chamber, above ground helps prevent substrate falling out if they come out on warmer winter days. That substrate is where they will dig and bury themselves. There is a baffle wall of those slotted blocks inside (three deep and two across from front wall to outer wall to keep the substrate from falling toward the opening (seen in front wall) and thus falling out (to the right of the opening as you view it). The substrate to the right (your right as you view it) is as high as all three boards, giving them a good depth under which to cover themselves while retaining enough heat to survive (or that is the plan). I have potting soil, coco fiber, cypress mulch, and plant material (leaves, dead cucumber & tomato plants and such) added in there all chopped up as substrate. The plant material slowly decomposing will produce some heat, probably more than enough heat to assure it does not freeze. That is important because all the substrate is atop a concrete patio and they cannot dig down into the earth as they normally would do so and did in my rear lawn when in NY. I have an indoor thermometer with an outdoor sensor hooked up that shows current temperature as well as the high and low for a 24 hour period. If it gets too cold inside the chamber then they will be brought inside but I am confident they will be able to stay outside all winter in that setup.

Ammo Shortage Over Soon - Don't Bet On It

As per Vista Outdoors in a Fox Business news report, they have a $1 billion backlog of orders that they do not expect to fill for at least one year! (Source - if the link does not work, copy and paste this: https://www.foxbusiness.com/lifestyle/vista-outdoors-ammunition-backlog-billion.amp. Fox sucks when using links like I just did.)

Since I doubt the ammo buying frenzy is going to stop any time soon, I imagine that backlogged orders for ammo and the amount of time it takes to fill them will both increase markedly in that time frame at least if the democrat actually becomes president. For some reason they keep calling him the president elect but that is not official yet so one can still hold onto hope.

If hope is lost because he does get in, you will have done well to have bought ammo and guns now if you are short, even at today's super inflated prices. The best price, on AmmoSeek.com, for 9mm (as I type) was $597.95 for a case (1,000 rounds @ almost 58 cents per round) and that was for Russian steel cased crap. The best price on brass cased 9mm, from a familiar to me & well known manufacturer was $675.95 (1,000 rounds @ almost 68 cents per round) for Winchester FMJ. To think, that Winchester ammo was probably going for around $180 - $190 per case less than a year ago. I should have held onto my OLN and VSTO stocks!