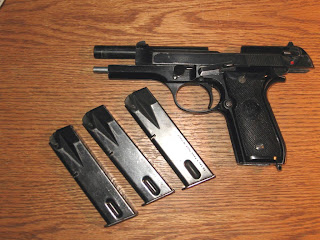 Well the pistol model it self may not be lucky, but the particular pistol that is pictured in this blog sure was lucky for me. This is the one that got me the moniker of Ballseye. I won't go into that story much except to say that the name describes where a shot I fired went in a self defense shooting in which I came out the winner many years ago. The long version of that story can be found here.

As for the pistol, the Beretta Model 92SB was the predecessor to the Beretta 92F (or the military version called the M1). This was the pistol tested back in the 1980s by the US military that blew away the competition. Out of many guns tested only two passed the test, the first place Beretta 92SB having more than twice the points of the 2nd place finisher. I read about the testing in Soldier of Fortune magazine. Man they had great articles on guns, and great articles about conflict going on in the world about which the media told you virtually to absolutely nothing. (One conflict in a northern African nation had been ongoing for about 20 years with nary a peep from the media. SOF has a couple of articles about it, then suddenly a couple of months later the media was all over it. There were lots of other instances like that too.)

Well I read that article about the 92SB and I was convinced I had to have one. A local store in El Centro (I lived in California then) had one in stock and I paid the asking price that was probably overpriced. I never regretted that purchase. Right from the beginning I knew I had a winner. The pistol is described as a double/single action 9mm pistol. It has a double stack magazine that holds 15 rounds of 9mm parabellum ammunition. One can also safely be carried in the chamber for a total of 16. The slide mounted safety lever is really a hammer drop lever and is ambidextrous there being one on either side of the slide. The hammer is exposed. The grips were either plastic or wood, mine came with plastic grips. The sights were a two dot system. The rear sight driftable for windage, the front sight fixed. There is an external takedown lever on the left side of the frame. It came in a blued finish that looked black. I got mine with two extra magazines.
Firing this thing was different. I had only owned a few other pistols before, and I had most of my handgun shooting experience with revolvers such as the Colt Border patrol and the S&W Models 19 and Model 66. The grips on the 92SB seemed huge, and I suppose they were very wide. That was to fit the double stack mags I suppose and because this was a full sized service pistol. Regardless of not having shot semi-auto pistols all that much before I got this one, I shot it just fine right out of the box. It hit where I aimed with a reliability I had not expected. There was little kick being that the 9mm is barley a satisfactorily powered round at best, but that was okay by me with 16 rounds to fire before reloading.
Over the years my Beretta 92SB took lots of abuse. Sure I cleaned and oiled it right after shooting it each time it got shot; but there were still a lot of knocks and hard times in store for this firearm. Despite taking a beating, and being used in all types of conditions, this pistol never let me down. In all the years I have had it - I imagine there have been less than a dozen malfunctions with it, those usually stovepipes (a failure to eject properly that was easily cleared and probably due to operator error or the ammo). It certainly did not let me down when I relied on it to thwart a robbery in progress - I was the one being robbed.
Because of its stellar performance over the years, I decided to buy a couple of Beretta 92Fs some years later. I am also quite satisfied with them. The only drawback I can see with them is there finish. Once it starts coming off, it seems to flake off in small patches, sort of like chrome coming off. Mine is not missing much of the finish, but is missing some. This has happened to one of mine and that one has fired several thousand rounds through it and also taken quite a beating otherwise over the years. The other one is still in great condition because I have used it much less. I have also owned about 5 Beretta Jetfires (I sold one only to miss it and buy another, did it again, then again, had another rust badly because it got dunked in and out of sea water over several hours in my pocket, and so on...), 2 Beretta 70S pistols (one was stolen) and I plan to someday buy a Beretta shotgun. The one thing that seems to be standard for the Berettas I have owned has been high quality. The 92SB was, and is, a stellar example of that.
All the best,
Glenn B
Posted by Glenn B at 8/10/2009 11:18:00 PM No comments:

I know I often write about a rifle or pistol that I say I would love to own, or even about one that I say I am planning on ordering, then I let opportunity fall by the wayside and don't get it. About 2 weeks ago I wrote up the Mosin nagant 91/30 with turned down bolt here. In the post I noted that they were available from RGuns at a seemingly very good price of $155. You have to remember this has a turned down bolt, not the normal straight bolt - therefore $155 is a very good price indeed if in as good a condition as they claim.

Well, I ordered one today. Right after I ordered it, I figured it would be nice to know when it might be shipped so I fired off an email to RGuns to ask. The reply said this, and I quote:

Hopefully that means it already shipped. That would have been in less than two hours after I ordered it. Wow is all I can say if that is right. I let you know in about 5 business days, I figure I should have it by then coming from Illinois.