He would certainly be if he really shot the animal in the photo: 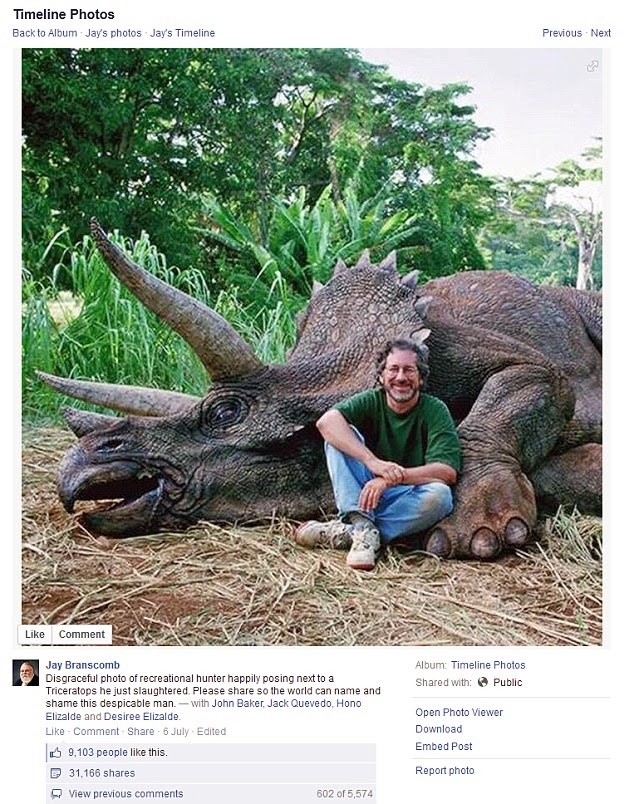 The leftist loony animal rights types truly are unbelievable in the amount of ignorance they can show about things like: animals, dinosaurs, hunting, extinction, humor, religion and so forth. A comedian posted a photo of Steven Spielberg on Facebook with Spielberg sitting in front of an apparently dead Triceratops (aren't they all dead by now) with the annotation that the man had hunted and killed the beast and needs to be named and shamed. It seems that once it was posted, at least a few animals rights types took it seriously, thank the public education system for that I suppose. They bad mouthed Spielberg for having hunted down and killed the beast.

Now, I wondered for a few minutes if those replies to the photo, claiming Spielberg essentially is a terrible triceratops terminator, were in jest. Based on my past experiences relative to how many, if not most, animal rights activists perceive things and how they will respond to  them, I am guessing that those early replies were in earnest. I am also guessing that those twits do not have a clue that there are currently no live triceratops to hunt and kill since that evil man Moses would not let them onto the ark because they were not vaccinated for rabies.

I almost hate to give the guy who posted that photo any credit since he appears to be a raving leftist himself but I will admit even sometimes they can see the insanity of their own kind (and will also admit I could be wrong as to his politics but after viewing his Facebook page, I doubt it).

I Won A Free Hog Hunt

Whoopee, I won something - a free hog hunt down in Texas. It includes hunting, meals and lodging for 3 days and 2 nights. Now, I suppose it is to be expected since free rarely means free, there were to be some nominal fees associated with it being otherwise free such as a $75.00 booking fee, a $45.00 minimum skinning fee, a fee for hogs taken over a certain size, a guide fee and a guide tip. I looked at all the fees and figured, that's not bad. Even if I were to have booked and then cancelled, a mere $75.00 loss for the booking fee would not be all that hard to take. The owner of the ranch even was willing to make an exception to the dates I could start the hunt and would allow me to start on my birthday. Sounded great, in fact sounded almost too good to be true.

Since the trip would cost a pretty penny though, what with a two to three day drive to the San Antonio area of Texas, motel stays, food and gas costs, I decided to do some checking up on the outfit offering the free hunt. I found several reviews of the place on the Internet. Bottom line, I declined the offer and will not be going for free or as a paid guest. Too bad since I was planning on bringing my son along for a nice road trip. The reason I turned it down was because while there were a few fair to good ratings for this place, I saw what I thought were too many negative or just mediocre  reviews of it. Some of the most frequent complaints about it, that I saw, were that there were very few hogs and or hog sign on the property, there were hidden costs involved, the lodging and meals were less than desirable.

I don't know if the reviews are true or not but they seemed enough in earnest to make me rethink whether or not winning that trip was good fortune or not. I decided that I certainly do not need to drive about 1,775 miles to be disappointed or worse yet to have my son disappointed. No way Jose. So, if we ever go to Texas for a Hog Hunt, it probably will be with another outfitter, one for whose services we pay the average going rate and one that has received rave reviews.