My latest acquisition for the Hessney Auction Co. LTD. was a Mossberg Model 640KA Chuckster in 22 WMR. Nice rifle except for one thing, the front sight was broken, the top half evidently snapped off at some point in time.

The solution was to order an OEM front sight from Numrich (it amazes me they often have original equipment manufacturer parts in stock). I knocked out the old sight with a brass punch today after first applying some Break Free CLP to it (would not budge before doing that) and that was easy enough to accomplish. What took some doing was getting the new one in place.That took a bit of filing around the edges. I did it a tiny bit at a time so as not to remove too much metal. After the third try or so, I got it to start in the front sight slot in the barrel - then I whacked away with a brass hammer until it was fully in place. After that, I touched it up with some bluing. Looks like it's been there for ages.

This rifle may be a keeper; although, I must add they are in high demand as far as I am aware. Heck, when I mentioned on a gun forum that I had bought this, someone else from the forum immediately sent me a PM to ask if I would sell it to him. I want to at least shoot it some before parting with it and being it is 22 WMR - and if it is a good shooter - I just may keep it.

I put together my first AR-15 lower, finishing it yesterday. Started it last week but had to buy a hex driver to get it finished for the grip screw and that took me a bit. Speaking of taking time, have I ever mentioned that I am The Great Procrastinator. I got a stripped Spike's Tactical lower in July 2013 - that's the one I used for this build - took me a little while to get around to it but it is finally finished.

Well, maybe it's not completely finished, the darned butt stock was loose once I got it on. It's an A2 stock so it needed a spacer that came with it but it was still loose even though I used the spacer and tightened the stock screw as tight as it would go. In fact I tried three times and then a fourth before it felt secure but I am worried it has been over tightened because in doing so I stripped the screw head slot somewhat. Just ordered two new ones (in case I screw up again I'll have an extra). Don't know what the problem is but when I get the new screw I will take the stock off (hopeful the screw head slot was not stripped to badly and it will screw off easily)  and try to figure it out - could be it just is a piece of junk that does not fit properly or maybe it was that I screwed something up.

Now an AR-15 lower is one thing but it needs another thing and that is an upper. I ordered one from Palmetto State Armory (cost now as much as a complete AR-15 rifle would have cost back in January but Biden may win and then what - no guns at all maybe or ten times the cost of what the inflated prices are now). I slapped the upper onto the lower and it looks purdy nice I need to take it to the range sooner or later and make sure it works without falling apart. 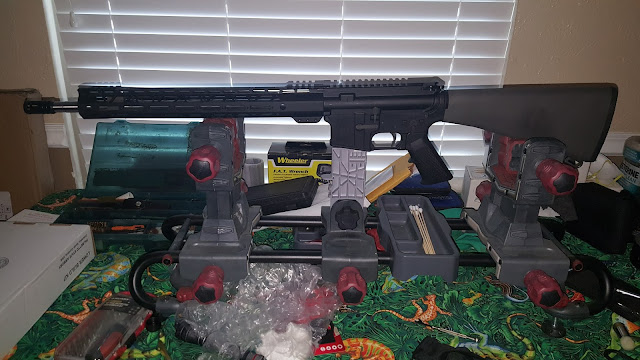 The next step though, before the range trip, will be to add the sights that came with the upper. That will not take long at all, maybe I'll get that doe today or maybe not. Time will tell.