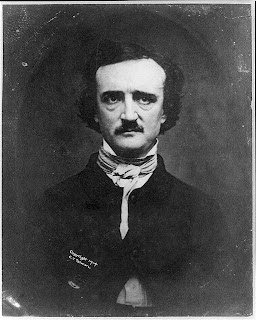 ...was born on January 19, 1809. He died on or about October 7, 1849 in a state of delirium, the official cause of death listed as 'congestion of the brain' During the 40 years of his life span, Poe was one of the most accomplished authors of his time, and has gone down in history as one of the most accomplished American authors of all time. As most of you should well know, he was and remains famous for his depictions of various terrifying scenes, be they of the realm of possibility, or of the realm of fantasy. His works included poetry, short stories, newspaper and magazine articles, essays, and one novel or novella. He is probably best known for such works as: The Raven, The Cask of Amontillado, The Fall of The House of Usher, The Pit and The Pendulum; but he was also instrumental in the creation a tale of another type - the modern detective story.

Poe is quite possibly my favorite author; and he at least was certainly my favorite author when I was still endowed with youth of body and of spirit. I have read all of his poetry, all of his short stories, and his one novel. My favorite of Poe's works, from all of those that I have read, would have to be the detective stories. The Murders in the Rue Morgue, The Mystery of Marie Roget, and, The Purloined Letter.I can tell you that Sherlock Holmes had nothing by way of detecting ability over C. Auguste Dupin. I have often wondered, was it a coincidence that his initials spelled out 'cad', which by definition is "an ungentlemanly man whose conduct in regard to woman is unscrupulous..."; or was Poe actually implying that a man with such a powerful facility of detection is by some requirement of nature destined to treat women in such a way. Furthermore is it a coincidence that the character of Sir Arthur Conan Doyle's (funny how Dupin and Doyle had the same initials albeit not in the same order) Sherlock Holmes later followed this trait in his dealings with women! But I digress from Poe, and lest I sully his memory with that of another great writer, let me return to my praise of him.
Poe was a literary genius, with few if any modern equals. He led a difficult and trying life, that was at times given the opportunity to come round the bend into the sunlight of happiness and wealth; but in the end Poe died as he wrote, troubled and tortured. For more information about him and his great works, see: http://lcweb2.loc.gov/ammem/today/jan19.html, and http://www.eapoe.org/index.htm. The second site listed having copies of many of his literary works available online.
All the best,
Glenn B

Something New But Not A Gun...

...should soon be on its way to me in the mail. I just ordered a Bounty Hunter Land Star metal detector. Hopefully the price I ordered it at matches the model I ordered. You see, Dick's Sporting Gods has the Land Star metal detector advertised on their web page with 2 totally different prices. It lists it under one listing with a price of $299.99, and under another listing with a price of $379.99, see: http://www.dickssportinggoods.com/search/index.jsp?kwCatId=&kw=bounty%20hunter%20land%20star&origkw=bounty%20hunter%20land%20star&sr=1. Now as far as I am aware, Bounty Hunter only makes one Land Star model, and that can be seen here: http://www.detecting.com/products/product.cmdl?c=378c73459a2911d4. I hope Dick's is not screwing around and playing some sort of a game with a different model, which of course, will go back to them pronto for a refund. I have seen the Land Star at other places for the lower $299.99 price, so I am hoping that is right. With a $10 off coupon I had, and with a $40 gift card I also had, the price in total for me was $249.99 (with free shipping).

Once I get this uber goober nerdy device, you will be able to find me at the beach this winter, especially after storms at low tide, searching for washed up coins and the like. I may try it out first in my backyard, but last time I used my brother's metal detector back there I came up with a metal box filled with crushed/burned animal bones (there were enough little bits and pieces to assure me the stuff in there was bones). Maybe a buried pet's remains, regardless it was something I would rather not have found. Who knows what other 'treasure' awaits me in my own backyard! Well anyway, I figure having a metal detector will be something that will help me go out to get some sorely needed exercise. Walking and digging should do something to help out in that regard. I have a few locations in mind in upstate NY too, place in the forest where there are old ruins, and these are places that not many people ever visit because they are far off the beaten path.

Now as for actually finding anything of value with this thing, finding a nice item or two right off the bat would also probably assure that I keep at it. Then again I do not expect to get rich, but just wish to have some fun prospecting. If I do find anything of value, so much the better.

Now before it gets here, I had better scrounge up the cash, to put into the checking account, to pay the AMEX bill; and of the $249.99 I will owe because of it, I have about $200 of it now. So I only need to come up with $50 more so that my wife doesn't clobber me.