IT'S KILTED TO KICK CANCER MONTH

Once again, the Kilted To Kick Cancer fund raising campaign has several manly gun toting men wearing skirts kilts for the month of September. They are donning ladies wear ethnic wear not so much in the hopes of raising hemlines but with the hope that they can raise cash for a good cause - The Prostate Cancer Foundation. In doing so, they hold a competition amongst themselves to see which of them can raise the most money. The winner of the competition wins something, I think a pistol.

If you decide to donate, you get a chance to win something too, at least if you donate through certain of the participating fund raising and kilted bloggers. For instance, every $5.00 donated through the kilted blogger through whom I donate makes you eligible for a chance at a prize - he lists the prizes on his site as they become available. For instance, last year I won a stripped AR lower (with custom engraving) from York Arms; alas I never was able to claim my prize due to confusion over the NY SAFE Act. Nonetheless, the opportunity to do some good by way of a donation to the Prostate Cancer Foundation and to get a tax deduction is there for you as is the chance to win some sort of a prize for each multiple of $5 that you donate (at least through the fund raising efforts of the person through whom I donate but I am pretty sure it works the same with many of the Kilted Cancer Kickers' efforts). The donations are all made through the same venue: http://www.kintera.org/faf/home/default.asp?ievent=1082303. 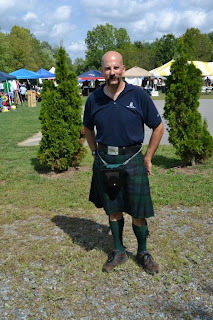 Just for your info, I donate through the fund raising efforts of Jay G of MArooned fame (yes that is him in the photo). If you would like more info about the fund raiser, you can visit Jay's blogpost about it here: http://www.ma-rooned.com/2013/09/so-its-september.html. He also has other posts about it. As I recall from last year, he posts a picture of himself, wearing the kilt, on a daily basis and also posts updates as to the amount raised to date and about prizes for they who donate (as they become available from people who donate them to his effort). I'll have to kick around to see if I can come up with a worthwhile prize donation to add to the mix.

If you want to donate through Jay, without going to his blog, you can do it from this link which takes you directly to his Kilted To Kick Cancer donation page:

or you can go to the main Kilted To Kick Cancer page:

and enter his name, Jay Grazio, after you click on donate to a participant. Of course, you can also donate through any other participant or can donate to the Kilted to Kick Cancer fund in general without going through a participant by clicking on Donate To KTKC at the link directly above.

If you do donate, the Prostate Cancer Foundation sends you an email receipt for your records and for tax purposes. This year, I received my email receipt almost immediately after making my donation.

By the way, I mentioned above that they are all "manly gun toting men wearing skirts kilts". There is a reason I described them that way which is just in case you get the wrong idea about why they are wearing skirts kilts everyday for a month. It ain't because they are pansies, and it ain't because they are hoping to get free daily (or more often) prostate exams whenever they bend over either. So, if you are inclined to think otherwise, just remember - they all carry - at least the ones I know.

Montana Goes NY On Us

In an unbelievable twist, the state of Montana has bowed to pressure from the Anti-gun Lobby and has made available to them the locations of every gun owner in the state. It seems that Montana politicians have chosen to go the way of the NY Leftists in much the same way that NY State released the names and addresses of almost every registered handgun owner in New York's Westchester and Rockland Counties to the media who then published the information in the form of an interactive map.


Likewise, Montana released the information to the media and the media immediately responded by publishing an interactive map of every gun owner in the state. As can be seen below, the locations of each of the Montana gun owners is shown by individual red dots on the map. 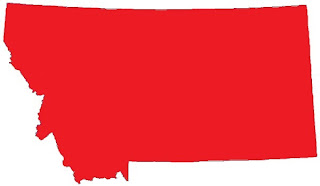 A hat tip to TOB.

Losing Your Head Via The Boing Factor

An alleged marijuana grower was nearly decapitated and was killed by a booby trap he (the grower) reportedly had set on his own property to protect his marijuana plants. The deceased was driving an ATV on his property and apparently forgot about a piano wire he reportedly had stretched across the path as a booby trap. The sheriff reportedly said:

"it's unclear what purpose it served as a security measure other than being dangerous to someone driving an all-terrain vehicle or motorcycle". (Source)

Well, it clearly seems to have been quite effective at only that even if it killed the wrong person. So why would the sheriff  be unclear as to what other security measure it might serve?This is one of the things so fucked up in law enforcement today, LEOs often overlook the obvious and look at almost everything as if there is something more to it, thus wasting time, effort and tax payer dollars while doing so. If indeed the dead man was the one who set it, as a booby trap to protect his own marijuana patch, then that the only purpose it served was as a security measure against ATV or motorcycle riders (or maybe even against a running man) should be absolutely left at that without further question and waste of tax payers' dollars.

As for the deceased, I wonder if he ever strived to hit a high note in life. While he may never have achieved hitting a mental high note, he certainly hit one at least physically, and I would imagine it was quite the boing.

I am almost afraid to turn on the television or radio news, I figure they must know the outcome by now, and I do not want to hear that she failed again. I am rooting for her, hoping really hard, that she makes it this time. With this report, from earlier today, saying she was at the two mile mark, it is almost unfathomable to imagine that she could again to reach her mark but that last 2 miles of Diana Nyad's 110 mile swim attempt from Cuba to Key West, Florida (without a shark cage) has got to be the most grueling 2 miles of her lifetime. I do not give a damn about her political convictions (which I am betting are to the far left) nor about the fact that she works or has worked for NPR (those leftist loons) but just care about the fact that no one has accomplished this before (yeah some woman did it in a shark cage which gave her the advantage of the draft that pulled her along) but Nyad is doing it without any such aid. She is 64 years old, American, has tried and failed four times previously, but is yet again making the effort and has at least reached within two short very long miles of the end. How can you not wish her well.

Damn, if I turn on the news there is no way it can jinx her right. To tell you the truth, there is no way I can wait until I hear it from someone else, I have got to know, and who knows, if it ain't over yet I may get to watch on live TV. I have been cheering her on for many years, I know she can do it.

1250 PM, edited to add: CNN reports that, as of about 20 minutes ago, she was at the 2 mile mark and was expected to hit her mark in Key West sometime between 2 and 4 PM. Swim woman - swim! I may yet get to watch it live as she swims the last few yards to U.S. shores.

1500, edited to add: Well she did it, and I missed it. The guy giving us the estimate to have our kitchen cabinets refaced was late and she did it while I was occupied with that stuff. Oh well, I can watch a video of it. The important thing is she finally beat it - got it done after a few other tries - and is the only person ever to have done it. Crazy lady maybe, for even trying, but certainly one heck of a determined athlete; I think they said it took her just under 53 hours.