I Love It When I Do Well At A Gun Auction...

...and that is just what I did this month at the Hessney auction on August 12th. I bought two firearms that day, both were shotguns. One was a Remington Model 31 pump gun in 16 gauge that I blogged about shortly after the auction in this post.

That one is an oldie, manufactured in December 1947 as far as I can tell, and a goodie. It is also a keeper, I think at least for awhile of shooty goodness. Then, who knows, maybe I will give it to my son or maybe not - time will tell.

Back then, I was not as revealing about the other shotgun I had picked up that day. I mentioned that I had gotten another gun in the post about the Remington 31 but that was pretty much all I said about it except that more would be revealed I the future. The reason for that was that I had been thinking of giving it to Brendan as a birthday present later this year and wanted to keep it under my hat until I decided for sure what to do with it.

That one was an as new in the box, unfired, Mossberg 9200 National Wild Turkey Federation Banquet edition 12 gauge semi-auto shotgun, manufactured in 1994 as far as I could tell. After doing some research on it though, I figured I would sell it. Anyway, it was just too damned pretty for me. 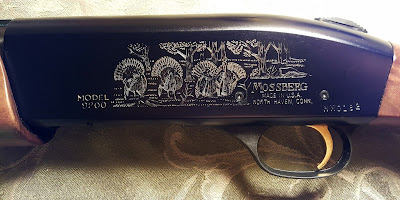 I wound up posting it on GunBroker.com just over a week ago but had no bites or bids and relisted it yesterday. I was in no hurry to sell it and was fairly confident it would sell there within the next month with hunting seasons upcoming in short order. Regardless, in order to increase my chances, I also listed for sale yesterday on a local gun forum. Here is how I described it in both ads when I put it up for sale:

"Mossberg 9200, National Wild Turkey Federation, Banquet (as per box label), 12 gauge, semi-automatic, shotgun as new in box. Has 24" barrel, vent-rib, gold colored (plated?) trigger, and engraved receiver. Box label says synthetic stock but it looks like wood to me. It accepts 2 3/4" and 3" shells. Includes four (4) Accu-choke II (?) choke tubes. Note, it says Accu-Choke on barrel but Accu-Choke II on box label. Tubes are: XTRA FULL, FULL, MOD & IMP CYL. Also includes choke wrench, manual and original box (with bar code label that has matching serial number to gun). This gun has never been fired. It is in excellent condition with the following minor cosmetic issues: Small scuffs on right (shiny) side of bolt above handle. Extremely small ding on top front of stock. Very small ding to spacer between recoil pad and stock."

Within just a few hours, of listing it on the local gun forum, I had an offer on it. The deal went through today. The offer came unexpectedly quick and that was good. The buyer maintained good communication, was amenable to working with me essentially around my schedule to meet me to do the sale; that was great since I am working all week. The buyer showed up on time, had cash in hand and loved the gun - that was the best - well almost the best. It could not get much better than that or so one might think. It does get better though. I spent x amount of dollars, in total, on both the Mossberg and the Remington back on August 12th at the auction. The price I got for the Mossberg today paid for both of them with about $4.00 left over to put in my pocket. So, I basically picked up the Remington Model 31 for free and have almost enough left over for a box of shells for it. That my friends has made me quite the happy shootist and a very happy auction bidder too.