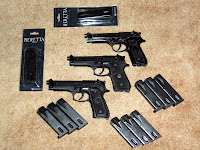 As you may or may not be aware, I am a big fan of the Beretta 92 series of pistols. I own one 92SB (the pistol of my Ballseye 15 minutes of fame) and two 92FS Berettas. I like em, they work well, they take a beating and keep on shooting, and they are easy to maintain. It seems that the U.S. Army agrees with me since they have just awarded Beretta a new contract to supply up to 450,000 92FS pistols to U.S. military customers worldwide. This includes an order for 20,000 pistols for the Iraqi military. I am impressed, I wish I owned stock in Beretta.
Here is a link to the Beretta 92FS site: http://beretta92.com/berettahome.htm.
I have to admit, all in all, my Berettas have been my favorite pistols over the years. From the .25 caliber Jetfire, to the .22LR model 70S, and the .22LR model 21, to the 92SB to the 92FS, I have loved em all
All the best,
Glenn B
Posted by Glenn B at 1/28/2009 09:18:00 PM No comments:

The Anticipation Is Just About Killing Me...

...as I await the planned big announcement that is going to be made by ClassicArms.us early next month. Here is the way they put it, and I quote: 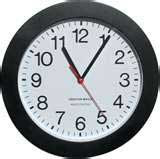 THE CLOCK IS TICKING ON A HUGE ANNOUNCEMENT AND SOME EXCITING NEWS THAT WE WILL BE BREAKING IN EARLY FEBRUARY.
STAY TUNED. GREAT THINGS LIE JUST AHEAD.
Now you tell me folks, should I be excited. Are they going to announce a great deal on some new mil-surplus rifles. I hope so, but gosh darn it, chances are that whatever it is they are getting in stock will be illegal here in the land of anti-gun nuts Schumer & McCarthy. Then again I may get lucky and find out that whatever they are getting in stock will be a gun that is completely legal here in NY as well as across the rest of the nation, that it will be selling for less than $250 apiece, and that it will be C&R eligible. If so, I am probably going to buy one. One can only hope.
Of course one can hope that maybe they are also getting in a huge lot of 7.62x39 current production commercial ammo that is stuff of decent quality, and that prices of 2 years ago have returned. In that case I'll be buying more than a case.
Now anything they may announce could all be ruined by an announcement that the House and Senate have passed a new assault weapons ban before then that was signed by the president almost as soon as it was passed. Chances are slim for that to happen so quickly, but you can bet that something miserable like that is in the works. Hopefully whatever Classic Arms is about to announce will assure we can get hold of some decent arms before a new AWB goes into place.
All the best,
Glenn B
Posted by Glenn B at 1/28/2009 07:43:00 PM No comments:

CheaperThanDirt.com - What Do They Know That We Do Not?

I am referring to the price of Wolf 7.62x39 Military Classic Ammo at CheaperThanDirt.com. It is a whopping $399.99 per case of 1,000 rounds as shown on their website today 01/28/2009. So I checked over at Sportmansguide.com - they apparently are out of it and do not even show Wolf 7.62x39 at all on their site. I also checked at Ammoman.com, they are out of stock. I then checked at AimSurplus.com and they did not have any listed in the caliber. I also checked with CenterfireSystems.com and they do not show any 7.62x39 ammo, well not real ammo anyway, they do have blanks for sale. Nor does ClassicArms.us show any ammo in this caliber for sale.

JGSales.com has Golden Tiger 7.62x39 FMJ with steel cases available (as per their website, who knows if they actually have any) going for $239.00 per case of 1,000 rounds. I do not have the money or I would be trying to order a case from them. (Thanks to my son's college, I will be paying about $295 just for two books for one Biology class. I cannot wait to see how much the books for his other 4 classes will cost.) We have some 7.62x39 on hand, I am guessing enough to last a year of shooting if we dole it out carefully, and then some. Lucky for us I bought ammo as soon as the presidential election results were in.

If you need any 7.62x39 ammunition, I strongly recommend (where legal) that you try to find some at a decent price and then buy as much as you can afford. Then store it for a rainy day, or something like that. Chances are that things will not be getting much better any time soon with the most rabidly anti-gun administration in place in Washington in our lifetimes.

The Weather Has Not Got Me Down...

...but the weatherman certainly is trying to do so. I got finished shoveling about 4 inches of wet snow an hour ago. I am a little achy since I did not only my small sidewalk but also my neighbors pretty large corner sidewalk (he is in Florida - and is apparently happier with the weather he is enjoying than am I with mine).

My wife and I need to go today to get grocery shopping done, the weekly stuff we get from either COSTCO or BJ's. We are also going to visit my mom who once again is in the hospital due to a bad fall on Monday night or early Tuesday morning (she was found unconscious in her room, but at least nothing was broken). Because we are going out, I decided to check on the weather. According to the radio weather reports we are to get continued freezing rain, sleet and more snow throughout the day and evening. Being an Internet junky, I also checked online with MSN. Their weather report said this under "Today's Forecast":

Well, I hate to tell them but sprinkles do not deposit 4 inches of that cold and wet white stuff on the ground. Nor do sprinkles come down in the form of steady fairly heavy rain, as it has now being doing over the past couple of hours or so; unless of course the word sprinkles means something different to them than it does to me. I think though they know what the word sprinkles means, and it is not heavy snow, nor is it fairly heavy and constant rain. Then again, isn't it the folks at MSN who went right along with that pompous buffoon Al Gore on Global Warming. Yep it was them at least as I remember, them and most of the rest of the media and the companies associated with them! Maybe the globe is warming, maybe all of this snow and cold we are experiencing is a result of the ice cap melting and all that cold coming down this way - and maybe they are all full of themselves in their inability to even report the weather while it is actually taking place. Sprinkles indeed - balderdash!

...since that vote takes place later today. Has anyone wondered what will happen if the plan does not work. I just heard a newscaster quote Representative Charles Rangel of New York when asked that question, his answer according to the reporter: "I don't know". There is not even a back-up plan in place for what will be done if the plan using hundreds of billions of dollars of tax payers money goes bottom up, not even a plan. Is that because politicians are so confident it will work, or because they believe it must work otherwise we are doomed because they are shortsighted and inept and don't have any clue as what else could be done. I believe the latter. I will again be emailing and calling my representatives and my senators to tell them to oppose the bailout. Although I feel almost sure my calls will go unheeded, they may not if enough of us make them likewise. A link to contact Congress and the White House can be found on the right side of my blog. Use it!