Smuggling It's More Than A Job... 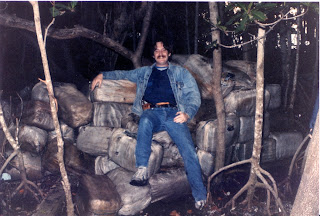 ...It's An Adventure. Well at least anti-smuggling was for me. This is a pic of me way back when in my early years with the U.S. Customs Service. I stationed in New York City at JFK Airport, but this is a shot of me while on temporary assignment to Key Largo, FL. The weather was not too hot, it was the off season, but the smuggling was hot enough to keep us busy. Me and my buddy Lou B were there with others from NYC for 2 weeks and Lou and I spent out time out on a go fast boat with a Florida Marine Patrol Officer. When we extended to a third week, the boss told us to go out and find drugs since we would not be going out on the boat again. He only added that wherever we go we stay away from Dynamite Docks. I was driving - where do you think I went, disregarding the bosses obvious BS and over Lou's objections!
Over several hours that night we listened to a boat come into shore and go back out to sea several times. We could not see it even though the Atlantic Ocean was virtually feet in front of us - it was dark - pitch black at that. A good night to smuggle I suppose; but not with two Customs Patrol Officers like us on the scene. We called in the activity and the search began just before sunup. The guys from the local office found a nice speed boat with tens of pounds of marijuana strewn about its deck. We figured we were in for a promotion after this seizure, but the station boss said he gave the boat to the sheriff's office. Go figure, we did not even get to do the paperwork! 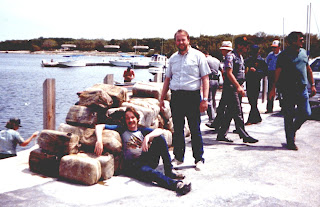 A short while later, another local Customs guy saw three Cubans walking out of a Mangrove Swamp toward the main road. He stopped and questioned them, they were all wet and so was their story. He soon found many bales of marijuana in the swamp from whence they had come. Seems they got their truck stuck in the mud trying to get in there to pick it up. They were arrested, and the grass was seized, but not without some ball busting work. We had to walk into the swamp, and carry each bale not to a waiting truck, but out into the water, over a reef, and load it onto a Custom's boat. Then we had to off load it later at a pier where it could be picked up by tuck. The second shot shows me and Lou after a hard night's (and morning's) work. Way on the right side of the pic, the guy walking to your right as you look at it was Charlie (can't recall his last name). He was the Customs Patrol chief who told us not to go to Dynamite Docks. A couple or few years later, Charlie was on America's Most Wanted. No not as a fed telling about a case, he was the target of a manhunt. Seems he had been telling smugglers when and where to drop off their loads on Key largo, and he was also telling his men to patrol in other places when those loads came in. Yep, just like he had told me and Lou that under no circumstances were we to go to Dynamite Docks that night because we would be killed, raped or otherwise molested by crazy people who hung out there. I knew on that night that all of it was BS, I just never imagined even for a moment that it may have been him attempting to keep us away from a load that he may have arranged to have been dropped of there. Of course that is the way I figure it now. 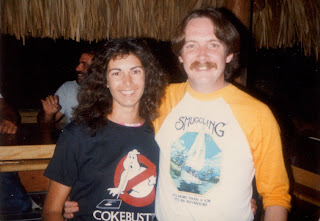 As for me and Lou - we never got one iota of recognition for that seizure. If I remember right it was 119 bales of marijuana at about 50 or 60 pounds each. I would have appreciated at least an atta boy in the form of a letter of commendation, but we got squat. Of course there were some perks to these temporary details. We got away from NY to have an adventure, we stayed at a nice hotel, we ate well, we drank even better, and well then there were the other perks - the local gals. This fine young lady was Deena Demero (if spelling and memory serve me right). She was the barmaid at the Tiki Bar at our hotel. It was the best bar on the island, and she was the best barmaid down that way for sure. You should see the shot of us in chains! Of course, that was all before I got married.
Yep - Smuggling, It's More Than A Job, It's An Adventure - well at least my job has been one!
All the best,
Glenn B
Posted by Glenn B at 1/10/2009 06:41:00 PM 2 comments:

Maybe I Have A Twisted Sense of Humor...

...but this is funny, very funny, in a macabre but completely right and just sort of way:

5 Somali Pirates Drown With Share of $3M Ransom
It appears that after receiving 3 million dollars ransom for a Saudi Arabian oil tanker the pirates made a hasty retreat from said ship with their booty. The thing is they were so hasty as not to have checked weather reports and they ran into a storm and their boat was capsized. 5 drown like rats, 3 made it to shore, and the share of the ransom of all 8 was lost at sea - or so say the extremely reliable and honest source who gave up the info for this story - the other pirates with whom they took the ship.
Now either they are looking for a way to take the heat off of 5 of the pirates and their loot by pretending they are dead and the money lost at sea, or they really drowned and the money was really lost, or they were murdered by their thieving brethren for their share of the treasure and those other pirates are now all that much the richer! Who knows, who cares so long as it is not the first one. If they are dead - good for the rest of us.
Ha, ha, ha, ha, hardy, ha - HA!
All the best,
Glenn B
Posted by Glenn B at 1/10/2009 12:32:00 PM 1 comment:

I Failed The Obamite Test...

...and all I can say is thank goodness that I did!

I'm an embarrassment to Barack!