Nice Deal on A Decent Knife

I have had a Buck 110 folding knife for quite the while now, about 5 1/2 years. I bought it with a gift card from my son at Dick's Sporting Goods back in 2012. It cost me $39.99 plus tax. Last year, I busted a small piece of the tip off of mine. My fault, I tried to use it for something I should not have attempted with it. I still have, carry and like mine but would rather have one with the proper tip. So, when Brendan gave me a $50 gift card for Fathers' Day (it came with a choice of about half a dozen stores to get it from) I chose to get it from Bass Pro Shops. When I went to their site last month I saw that the Buck 110 folder was on sale for $34.99. Not bad, thought I, but I hesitated and the sale disappeared. 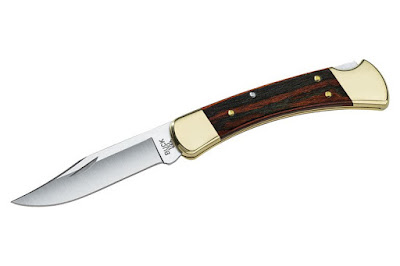 I have kept looking since then and today I saw it was again on sale. This time though it was one sale for only $29.97! Heck, I ordered two of them and will probably give the second one to Brendan. With tax included, it came out to a total of $65.11 (shipping was free with an order over $50). So, after the gift card, the out of pocket expense came to only $15.11 from my pocket. Not a bad deal at all for me but what makes it even a bit sweeter for me is that the first time I got one, it came with a nylon sheath - these new ones are coming with black leather sheaths - much better in my opinion.

The deal is a "flash sale" so I am guessing it will not last long. It is available either as an online or in store purchase. All in all this is not a bad deal at all for anyone.

So, since September, I have been a grandpa, grand dad, grampus, grumpus and whatever else comes with having a grandson. Not all that long ago, the little rug-rat, known to me as RJ (and to everyone else as Ryan John) has started to pull himself up and walk around holding onto things as he did so. Then maybe a week or two ago at most he started taking his first unassisted steps. He only makes it a couple to a few steps and then it is down on his butt or his face he falls but he is usually right at it again a moment of so later as the mood strikes him. It is funny to watch but it has a serious side too.

Along with his crawling and now his first steps has come the desire and ability to explore. His hands are on everything and along those lines we need to secure the fort from enemies (so to speak) from within. No, I do not think of RJ as an enemy in any way, shape or form but I do think of his now incessant and mischievous explorations as the potential for disaster - just as should all parents and grandparents. These tiny tykes get into everything if you let them.

So, last week, upon my wife asking me to assure he would not be able to get at any of my guns - I decided to start Operation Out Of Reach (or at least Out Of Operation and even they are out of RJ's reach) - and you will soon see what that means) for all of my firearms. I also took it upon myself to add ammo and knives to that list. The I tacked on medication when my daughter mentioned meds too. What I did with my firearms was lock most of them away in secure storage. They all are not loaded. Many of them have all parts intact with the exception of their mags; the mags I keep separately if they are readily detachable. Others have mags intact but again are not loaded. Then there are the ones that did not fit. It happens, gun enthusiasts get a gun locker, cabinet or safe that is too small and as their collection grows the room runs out. Well, those are the guns that may still be within reach o to speak but even then they truly are not within his reach because of where they are located and the fact he has no access. regardless of them being where he cannot get to them, I took the extra step of putting them out of operation. In other words, when it came to any guns that I could not secure in storage, I removed the bolts from them and stored the bolts. If I could not remove the bolt or other part of the action, then I secured the firearm with some sort of locking device to render it inoperable.

As for storage, I think a new gun safe or at least a locking metal cabinet will be in order for my older clunker rifles. As for my carry pistol(s) - they are another story. I am looking into getting a biometric safe or three to secure around the homestead so that I can keep them securely in different areas of the house. Of course, I could always do what I did when my children were very young and unload them every day when I get home and place them where he cannot reach them but I think I may check into the pistol vaults anyway.

As for my ammo, and storage of it:  I recently bought some additional ammo cans - a dozen to be exact. It is not like I have enough loose ammo laying around to fill 12 cans but I had a decent amount of it stored on shelves and figured it would be more secure in the ammo cans and those cans placed into in a closet away from prying hands. Since the closet is nowhere to which RJ has access that should be good but I think I may also look into a locking door knob. Once I get whatever ammo is in boxes secured, I need to make a sweep looking for any possible loose rounds that could be here or there. There are certainly not many, if any, of them but why tempt fate. I figure with a kid in the house it is much better to be safe than sorry - especially since it is out grandson!