...all I can say is I have been busy doing good deeds helping out the daughter of a recently passed retired Customs Supervisory Special Agent to sell his long guns and knives and if I feel up to it tomorrow his ammo too (what of the ammo is in good enough condition to shoot anyway). Damn has that taken up a lot of my time, so much for volunteering but he was a good man as far as I am concerned and I am happy to do it for is family and in his memory.

Also have been playing middle man in passing info onto my Customs family about another retired agent who has been in the hospital with the big C and it was worse than originally thought. Sorry to say, I have not seen him yet because the other thing has kept me so busy. Maybe tomorrow but only after I finally get to some of my own affairs and personal business that needs taking care of because I have been neglecting it while doing that other stuff with the guns and knives.

All good though and when I have gotten a chance to go outside to get something of my own done today, I noticed that the roses in my front yard are still looking good. They are the most fragrant roses I have smelled in over 7 years since radiation therapy for throat cancer ruined my sniffer at least as far as smelling roses goes. This is the first year since then that I can really appreciate their fragrance again and it is wonderful. This is one of the several I have left: 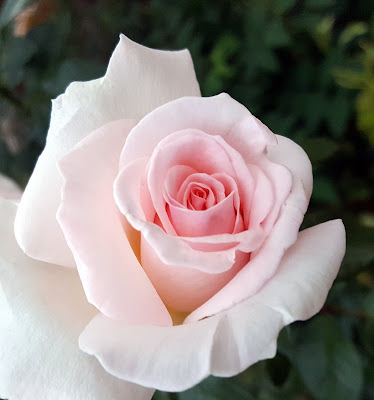 Our daughter gave us the rosebush a few years ago. It as and remains a good one. Heck, the way things are going, it may well outlive me. Certainly produces lovely roses. Now being it is 44 degrees outside right now﻿, the end of the rose blooming season may be upon us; although, I think it was last year or maybe the year before, there were roses blooming in the neighborhood into December or January! My guess though, with the sudden temp drop yesterday, is that this fall and winter is going to be a cold one - too cold for roses sooner than later.
Speaking of cold, it was chilly outside today when I took a break from the above things to get a bit of work done in the backyard. While doing that, I saw one of my Russian Tortoises basking in the late afternoon sunlight. I found another two, maybe 1/3 to 1/2 buried in depression under some weeds and found the fourth dug in but not too deep in the compost pile. The male Hermann's tortoise is also dug in there. Decided to leave those outside this year so it will put them in breeding mode come the spring. Have to heft the female Hermann's tomorrow to check her weight and maybe I'll put her into the compost pile as well tomorrow; the thing is though, she often lays eggs in December so maybe I will wait then bromate her indoors. The Redfoots will stay indoors for the cold weather and basically active for the fall and winter.
That's it for now. Screw commenting on politics and current events, I am hitting the hay.