When You Order This... 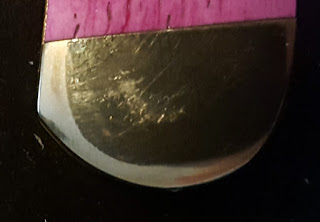 ...then something is really very, very wrong. Now, don't get me wrong- while I was not happy about that bolster having a scrape on it, it was the other thing that wound up making it totally unacceptable, not only to me but to my daughter and to my son-in-law, as a gift for their son, aka: my and my wife's first grandson. Have you figured it out yet. If you have not then you most assuredly either do not get me at all or are not that observant or both. 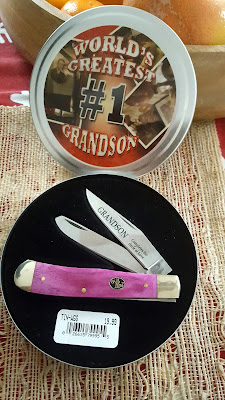 You must almost certainly see it now - don't you? The handles were supposed to be blue. How in Hades they decided to send me a knife - a gift for my grandson - that has a pink handle is absolutely beyond my comprehension. I ordered the Frost "Worlds Greatest" Trapper Tin - Grandson knife with blue handles. At customer service, where I bought it, they are now saying it is purple but here we all see it (at best) as a purplish pink. I guess maybe they thought that the liberally leftist gay loving New Yorkers would not notice but I assure you - we noticed because we do not fit the stereotype I just mentioned. (Well, it took me a bit to notice - more on that below.)
I ordered this disappointingly off color trapper knife from Smokey Mountain Knife Works in time for delivery before Christmas. On their website the description of the knife included this: "Handle Color Blue" and also this: "Blue smooth bone handle".  Yes, they mentioned in two places that the handles would be blue. The photo on their site showed (and still shows) it as being unmistakably blue (see the first pic).
Blue is the color that I - as a traditional, somewhat conservative (more libertarian), hetero-sexual, old fashioned manly type of grandfather (who does not self identify as anything I am not) - accepts as being a suitable color as a gift for a boy. I do not believe that pink or even something that they claim is purple (but looks all too pink to all who have seen it) is appropriate as a gift for a male child in our family. (If you cannot tolerate my view on that - go screw yourself, I am sick of leftists telling me what I have to do to please them.) The funny thing is that when I opened it, what struck me most was the condition of the bolster. How I missed the pink is beyond me but maybe I missed it because I was pretty upset that the bolster was scratched and I was seeing red at the time.
Anyway, I emailed SMKW customer service asking for a return mail label (shipping at their expense) because of the bolster damage. They got back to me saying I had to call them to get an RMA number and I would have to pay for return shipping. Regardless of the scraped bolster, I wrapped the knife in Christmas paper and gave it to my grandson (obviously not to use now but as a keepsake for later use). I figured I would return it after Christmas as there was no time to get another before then. On unwrapping it, my daughter and son-in-law (and just about everyone else who was at our place to celebrate Christmas) lambasted me for buying my first grandson a pink knife. Someone even asked me, in a pretty good imitation of a South Park voice, if I hoped "...he would turn queer"!
Today, I finally got around to calling SMKW about the return. They again told me I had to pay return shipping even though the knife was sent to me in damaged condtion and that they would refund the original shipping and cost of the knife but only if they agreed it was damaged and /or was not as stated in in their online description. They were not very forthcoming as to whether or not they would reimburse me for the return shipping cost.
The customer service lady also told me that there is a note in their system about this knife saying it is now available only with purple handles! You would think (or at least I would think) they would let buyers know that in the description of the knife but I looked right after she told me so and there was no mention of it coming with purple (or pink) handles. My guess is that their order for a large lot of these knives came in to SMKW from the manufacturer in China and that it was only realized too late that they were pink - a non-traditional color for baby boys (maybe it is the traditional color in China - who knows) - and thus they decided to call it purple hoping they would not get as many returns when unhappy customers called in to return them.
I seem to remember that a few to several years ago, when I bought all of my male relatives Case Christmas Trapper knives, that some of them had been scraped on the bolsters too; although, none of them were pink. That foul-up and this one are enough to have me thinking I may have been shopping for knives at the wrong place. Next year, I may have to find another source from which to purchase knives. I guess how they handle this return will tell.
All the best,
Glenn B