...but when I do I buy myself something nice. Really, I was not intent on making any purchases yesterday and definitely was not about to go out to stores to do any Christmas shopping nor any other shopping. Black Friday is just too crazy for me; the lines I have seen outside of some stores over the years have been long and sometimes there for days with people camped out in tents while waiting before the sale event. The last time I waited on really long lines for many long hours was for tickets to see Led Zeppelin at Madison Square Garden and for one of their shows at the Nassau Coliseum in Nassau County NY (I was on the line for well over 24 hours in freezing cold for the one at the Coliseum). That was back in the 1970s. I got great tickets for both shows but had to settle for listening to one of those shows broadcast live on the radio because I wound up in the hospital after an emergency appendectomy; I did not eat Quarter Pounders with cheese for years after that because it was after eating one that I had the appendicitis attack but I digress so...
As I said, I usually do not shop on Black Friday but I unintentionally wound up doing just that yesterday and I got myself a nice Christmas present. For a good many years of my adult life,  I have figured if I am going to essentially be Santa Claus for others then I may as well be Santa for myself too. Now mind you, I did not get off the couch to shop at any stores; instead I was scouring the Internet at first looking at some things on the Beretta site (not guns) and then merely looking at Black Friday deals related to firearms. I was not seeking to get myself something but was just killing time and wondering if I should get my son anything else firearms related for his birthday when I came across an advertisement for this at $359.99: 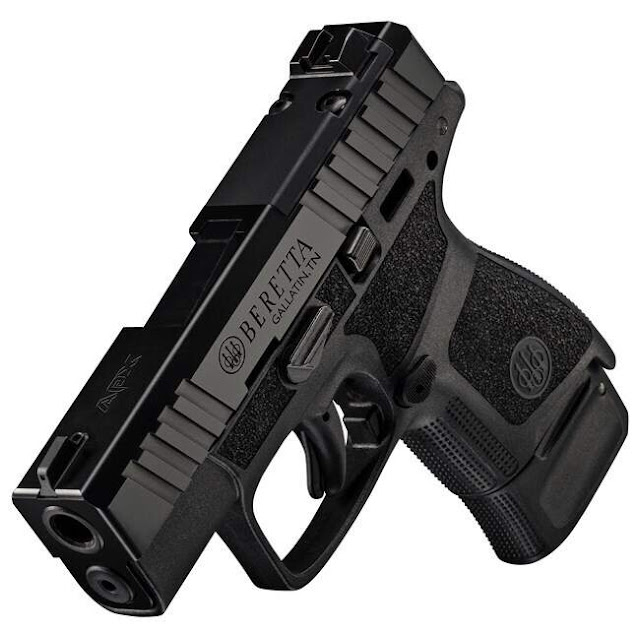 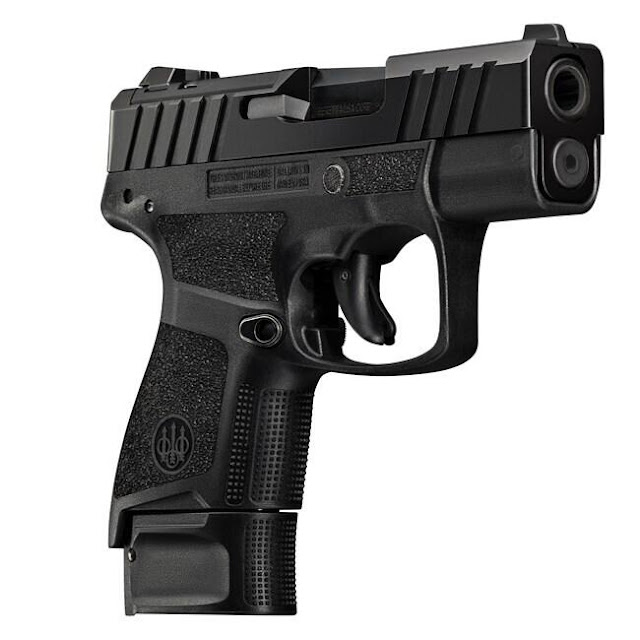 That is a Beretta APX A1 Carry (click on the link for specs and such) 9mm pistol. I was not looking to buy it but it did seem like a great deal. After seeing ad, I checked out the pistol on Gun-Tests Magazine's website. The APX Carry got a best buy review from them and an A rating so I figured its A1 version would be just as good. I was beginning to get intrigued and then went to check on prices for it at AmmoSeek.com. That is where I saw that the Sportsmans Outdoor Superstore was offering it for $60 less. That hooked me.
Since the price of this one was only $299.99 and that there is a currently running $100 rebate offer from Beretta on them, I ordered one almost without hesitation. Yeah, I admit, I hesitated a bit because finances are not all that great right now but what pushed me over the edge was that I'd be getting a Beretta at a Hi-Point price. Imagine that a Beretta for $199.99 plus tax after the rebate and I got free shipping too. How could anyone who is a Beretta fan turn down that Black Friday deal! I can only hope (and I guess expect) that the quality of this little gun will be as good as what went into the making of all of my other Berettas. It will be my first striker fired, polymer frame, Beretta pistol but definitely not my first Beretta. I kind of, sort of almost definitely a fan of Beretta pistols - being I already own ten of them, I suppose that probably qualifies me at least as a bit of of a fan.
Merry Christmas, ahead of time, to me from me. My thanks to  Bartolomeo who started it all in 1526, to Pietro who modernized the company and to all the others in the Beretta family who have made & continue to make some of the highest quality firearms the world has ever seen. Thanks also need be given to the big guy upstairs who gave us his only begotten son as the gift that started it all.
For God so loved the world, as to give his only begotten Son: that whosoever believeth in him may not perish, but may have life everlasting. (John 3:16 )
Christmas, as I see it, has always been about giving; albeit, maybe not to ones-self but can you blame me? After all it was 'such a deal' (Murry the vendor, personal communication); so, how could I resist. I hope your Christmas shopping works out as well as mine has so far.
All the best,
Glenn B
Posted by Glenn B at 11/26/2022 10:30:00 AM

Speaking for myself, after seeing this, I would never buy a Beretta, or anything from one of their subsidiaries. https://cowboystatedaily.com/2022/04/27/gun-lover-jeffree-star-receives-custom-pink-firearm-from-beretta/ They seem to be ok with degenerates.

Honestly I had no clue who was Jeffree Star before I did an Internet search after reading your comment. I had never, to the best of my memory, heard of him at all before but there you were posting a link about him and thus furthering knowledge of him in the world and possibly inadvertently increasing his popularity with folks who may like people of his ilk..

While I almost definitely do not agree with his lifestyle nor with his life's choices (I do not know enough about him to say so for sure), I do not give a rat's arse what Beretta did or did not give to him if they did so legally. That is their prerogative. Of course, if he had been proven a convicted criminal, I probably, at the very least, would write a letter of complaint to Beretta and very possibly would boycott them for promoting criminality (if they actually had done so) but the fact as reported is that he is a licensed handgun owner. Thus, if that is true, it means (as of the date of the article to which you linked) he was not a convicted felon nor had he been convicted of domestic violence and he was eligible to receive and own firearms and Beretta was within their rights to give him the gift of one as they saw fit. If, on the other hand, by your use of the word "degenerates", you mean to indicate that you believe him to be morally lacking, and thus that Beretta should be boycotted because of their gift to him, again that is your choice to make.

Really, as for what you prefer to buy and from which companies with which you prefer to make your purchases, and which you choose to boycott, that is your choice for your own reasons. If you are actually going to base your purchases on whatever companies do or do not do business with the likes of him, my guess is you must have a lot of money in your mattress because you are probably not spending your money with the great majority of companies in this country. Your choice to make, as I already said and I am not making a judgement of you. As for me, I will keep buying Beretta firearms because of their quality and performance. I am not going to stop buying them because they exercise the liberty renegading their choices relative to the RKBA, their right of free speech and association based merely upon whether I disagree with the life style & choices of the person they chose to whom they gave a gift.

Do you boycott the 2nd amendment - do you not own firearms because that right equally applies to the likes of Mr. Starr as it does to you? Just wondering.

Is the Gun Tests reviews worth the subscription price? I assume it is because otherwise you would not have referenced it. Do you feel their reviews are a good and honest value?

I looked over their site, and think it might be of benefit to me. However I don't have any practical experience or knowledge of them. I'd appreciate any thoughts or observations you'd be willing to share.

Thank you and have a Merry Christmas!
Pinky