...in the just over one year that I have lived in Texas. In fact, I probably saw less than 15 mosquitoes in all that time. Well, that was true until yesterday when I got several mosquito bites while out with Skye for an afternoon walk. I must have swatted at least 30 or 40 off of my legs - shorts season may be over if this persists.


Yeah, I know that most mosquitoes are crepuscular and or nocturnal. Yet, these dive bombers were out in broad daylight which immediately clued me in as to which species were they. On one swat of my leg, I got two of them, one demolished beyond recognition but the other quite identifiable as an old foe - one I first encountered while on a work assignment to Haiti - the Asian Tiger Mosquito.

These buggers are aggressive and nasty as they are vectors for various very serious and sometimes deadly diseases such as: Dengue Fever, the Zika Virus,  Equine Encephalitis and Chikungunya (never heard of that one before today but it was shown on the CDC site as a sickness spread by these pests). Just got over being sick as a dog with some sort of internal infection and certainly do not need some other malady to make me miserable! 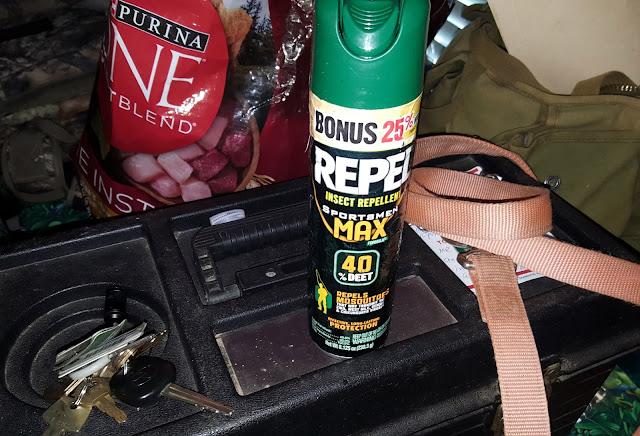 I am hoping to avoid additional bites from these vicious bloodsuckers in the future and have brought out the artillery so to speak. This can now sits next to keys and Skye Knucklehead's leash - at the ready for when we go out. If that does not work, I may have to carry Raid Yard Guard along on our walks. As for Skye Knucklehead, she takes a monthly tablet that kills not only fleas and ticks but mosquitoes too and of course she also takes a dewormer. She's better off in me in the anti-parasite department!

Ive met those guys,, so muscular its downright creepy..

I believe that is called a tiger skitter I.C.B. Mistaken. ANYWAY they are nasty like bastards..BTW that is a small one. Some of them in E.TX. can stand flat-footed an SCREW a turkey...LOL