Went To An Indoor Range Today...

...with my son Brendan and his girlfriend Nikki. She had never shot before and my son wanted me to give her first instruction. (Truthfully, I am sure he could have done just as well.) Anyway, while the photo may not be that great, as you can see her shots, shooting my Glock 19 with the target at 3 yards, are purdy rootin tootin darned good shootin for her first ones! 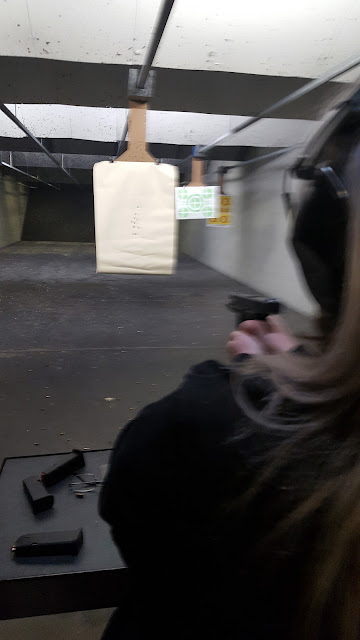 She shot my: Glock 19 GEN3 (pic above) & Iver Johnson Arms & Cycle Works Model I.J. Target Sealed 8 and Second Model .22 LR double action revolver (pic below). She fired almost all of the shots with the revolver in single action as she could barely pull the trigger in double action mode. She is shooting the revolver at the same target as above. 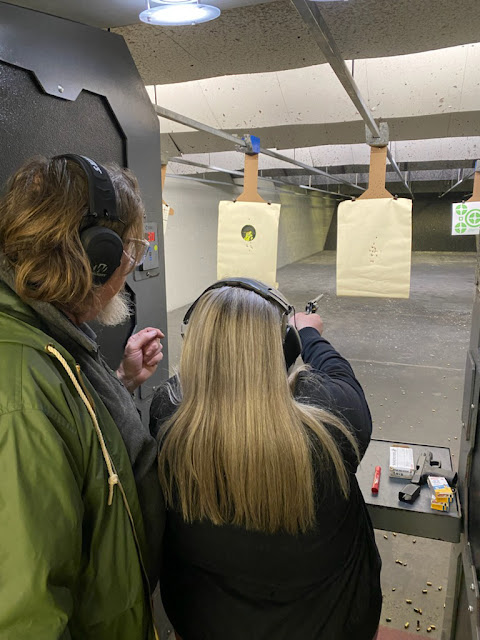 She also shot my son's Glock 21 in 45 ACP and his HK VP9SK in 9mm. Not only did she get off good shots but she did so safely and followed instructions very well. I see a future firearms enthusiast in the making and yes, she said she wants to go to the range again. I think her goal is to get her carry license and of course, my son gets a new shooting buddy.
It was a nice feeling breaking in a new shooter, it's been a long time since the last one for me. It was also nice going to the range with Brendan, it's also been a long time, in fact too long, since the last time we had done that together. All better now though.
All the best,
Glenn B

Looks like she had the opportunity to be exposed to a fairly wide range of recoil with that variety of guns. Glad to see that she enjoyed it. The skill could save her life someday.

good job. i have found that new female shooters usually do better than males. less bull headed, or more open to instruction i suppose. glad you got out with your son.